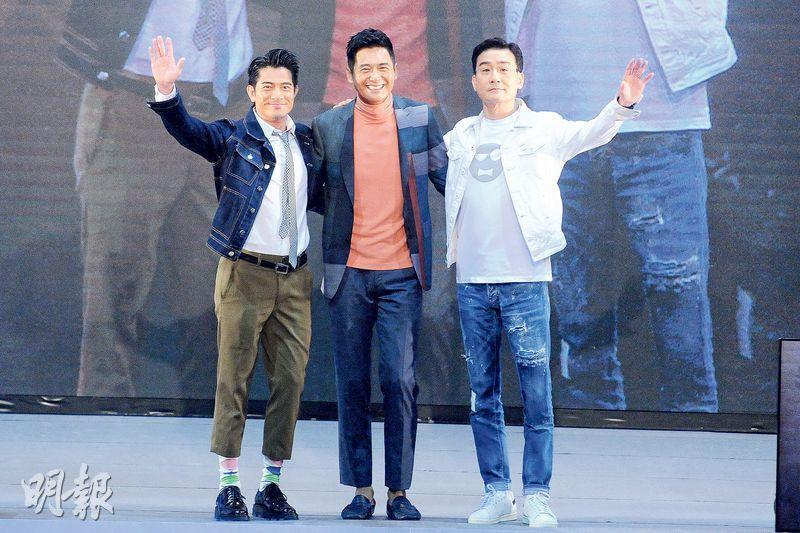 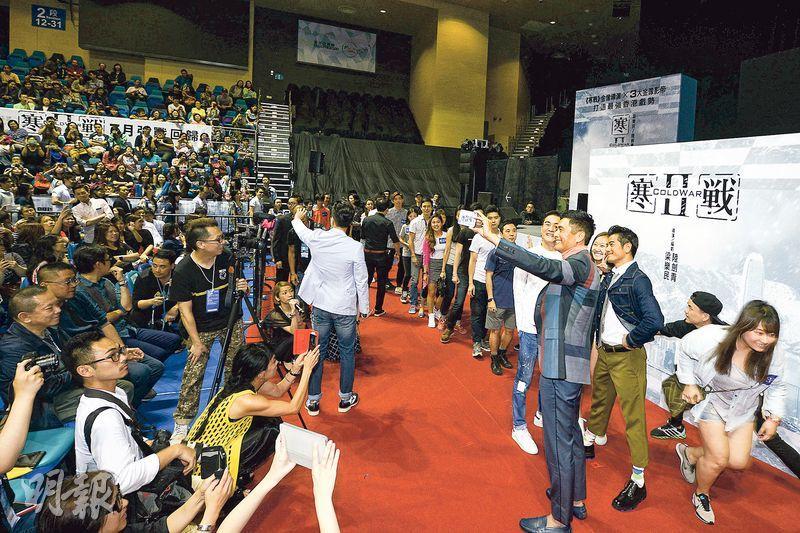 Avid photographer and "Selfie King" Chow Yun Fat even mastered the art of selfie! Yesterday he, Aaron Kwok Fu Sing and Tony Leung Ka Fai challenged the world record of taking selfies with a group of fans. First they and their film COLD WAR 2 (HONG JIN 2) 's directors Longman Leung Lok Man and Sunny Luk Kim Ching shared the film trailer with several hundred viewers and talked about their production experience. Sing Sing said that he was very happy to be able to work with the team again and with Fat Gor. "To be able to work with Fat Gor, I was so happy that I couldn't sleep. I hope everyone can continue and make even more movies, maybe even prequels to share with everyone." Ka Fai also revealed that he was very nervous about working with Fat Gor. "Normally when I make movies I am not considered diligent, this time before work I memorized the script, I don't dare to disappoint Fat Gor." Fat Gor humbly said that he tag along and took a pay cut for the film. "I looked for an opportunity to learn them, actually I am even more nervous. I had to play a special committee chief to question them, I couldn't flub my lines." ,br>
When the selfie segment began, "Selfie King" Fat Gor was responsible for holding the phones and taking photos, he even commanded lighting and background poses. Within 3 minutes he kept take photos on mobile phones. After completing his first challenge he revealed, "I slipped up a little, several in the middle didn't come out. Let's try it once more, please turn off this row of lights (pointing above his head) for me and let me try again." Finally on the second try he finally successfully took selfies with each of 131 people and took over 1,576 photos. Although the tabulation process has not become official, conceivably the world record has already been successfully broken.

Afterward Chow Yun Fat quickly left, leaving Sing Sing and Ka Fai to be interviewed. Sing Sing said that selfie was already a popular way to socialize. "I take selfies all the time, sometimes when I go for hot pot casserole, I would take a photo with the pot. (Who have you taken the most selfies with?) Hot pot! (what about people?) My assistant, because that is who I usually go to eat with after work." He also revealed that lately he has been busy with a film in Malaysia. Although the climate has been hot and humid, he still made hot pot his companion.

Leung Ka Fai was asked about his daughter being caught on a date. He said, "I don't know what you guys catch, so I have no way to answer you. (They were just kissing on the street photos!) She wouldn't be like that, when I am out with her we don't kiss, I think you got the wrong person!"
Posted by hktopten at 6:41 PM