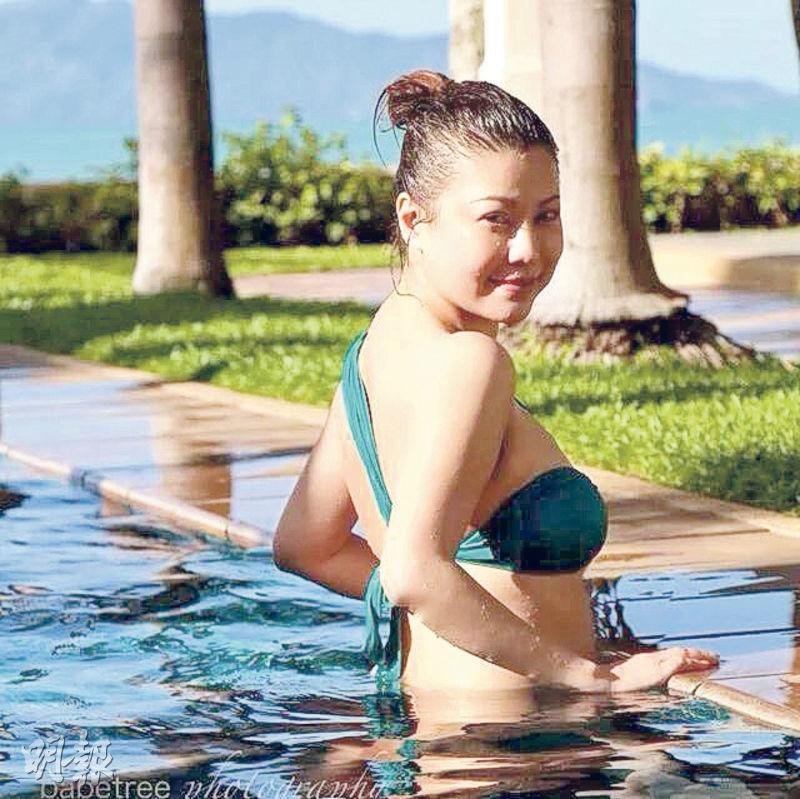 The first generation "Happy Girls" member Bonnie Law Ming Chu (originally named Law Ho Yan) yesterday passed away from heart failure at age 47. Law Ming Chu's friends were surprised and saddened as they lamented the loss. Reportedly, Law Ming Chu yesterday morning suddenly became ill when he got up. Mother Law was frightened and sent her to the hospital, unfortunately she still could not be saved. Law Ming Chu recently made a comeback with an internet series. She was trying to lose weight, which was the suspected culprit.

Yesterday morning came the news of the first generation "Happy Girls" members Law Ming Chu's death. The media immediately called Law Ming Chu's benefactor Raymond Wong Pak Ming, who confirmed the news and said that Mama Law was already contacting her daughter's friends. He was very shocked because he just saw her ten days ago in Residence Bel-Air. At the time she was still very energetic and did not look any different.

Reportedly Law Ming Chu recently took an internet series and thus was actively losing weight. She lost over ten pounds and was suspected to have overdone it. In 2012 when Law Ming Chu appeared in public, she looked bloated due to severe endocrine disorders. After half a year of acupuncture and exercise, she gradually returned to form.

Law Ming Chu at the end of last month went with friends to watch Leon Lai Ming's 4D concert and happily chatted with friends in the VIP area. Law Ming Chu's final social network update was 4 days ago, when she posted a photo with her godchildren on instagram. "Happy dinner with my godson and goddaughter." Law looked great in the photo.

Clifton Ko Chi Sum in the 80s at Cinema City worked on a series of HAPPY GHOST films and made many young female stars like Law Ming Chu, Rachel Lee Lai Chun, Anna Bridgewater (Pak On Nei), May Lo (Law Mei Mei), Charine Chan Ka Ling and Fennie Yuen Kit Ying. He was reminded of how he met Law Ming Chu over 30 years ago. He said, "Her first film HAPPY GHOST was also my first film as a director. She got into the business as a last minute replacement. Her character originally went to (Joyce) Ni Shu-Chun. She worked for a day, then went to Japan with (Frankie) Chan Fun Kei for a movie. She did not give any notice and I had to immediately make a change because the movie had to make a summer release. Cinema City's public relation department had a female employee who said that her niece was pretty sharp. I immediately asked her to set up a meeting at the company. When I saw Law Ming Chu it was after midnight. At the time she was around 16, and she really was pretty sharp. She wasn't shy, had a lot to say and talked fast, she was right for the character. After half a hour of the meeting I decided to cast her." He even remembered that the last thing he said to Law Ming Chu was, "Aren't you sleepy? You still have so much to say in the middle of the night!" Ko Chi Sum also said that he and Law Ming Chu did not stay in touch but would occasionally run into each other at the airport.

Yuen Kit Ying was surprised and saddened to hear her friend Law Ming Chu's passing. She said that they last met at Wong Pak Ming's birthday party last month. "At the time Law Ming Chu looked great, very pretty. Everyone even tried to get together for a dinner next time. I don't know why it would be like this, it's quite regrettable! My condolences to her family."

Lee Lai Chun and Law Ming Chu met on the film HAPPY GHOST in 1982. Then they worked together again on the Leslie Cheung Kwok Wing starred romance FOR YOUR HEART ONLY (WAI NEI JUNG CHING). They have practically grown up with each other. Sister Chun replied, "She really was direct, my heart aches over the loss of a good friend!"

Law Ming Chu was the 80s Happy Girls members with Lee Lai Chun, Lam Shan Shan, Yuen Kit Ying, Law Mei Mei and Chan Ka Ling. Law Ming Chu's personality was exactly a "Happy Girl". Back then she rose to fame as a girl in uniform and stole everyone's hearts with her innocent and healthy image. At age 15 she was already famous. Among Law Ming Chu's past classic films, other than Wong Pak Ming's HAPPY GHOST and ISLE OF FANTASY she also worked with Cheung Kwok Wing on FOR YOUR HEART ONLY and FRACTURED FOLLIES with Chow Yun Fat and Joey Wang Cho Yin.

In 1988 Law Ming Chu went to study in Canada. In 1993 she graduated, returned to Hong Kong and worked in finance. Then she guest starred in the Andy Lau Tak Wa starred THE CONMAN (DOH HUP 1999) and THE CHEATERS (JING JEUNG). In recent years she would also often attend industry dinners.

Shi Nansun yesterday attended the Macau International Film Festival. The then Cinema City CEO Shi Nansun lamented that life was unexpected. She was saddened to hear the news. Looking back the girls were very afraid of her because she constantly lectured them. Shi Nansun said, "She really was Happy Girl, she had no selfish motive at all. She was always laughing, everything was written on her face. She was direct, she spoke what was on her mind!" She said that earlier when she had tea with Wong Pak Ming who discovered her she was brought up. She estimated that Wong Pak Ming was definitely very heartbroken. Shi Nansun said that she has not seen Law Ming Chu in a long time. "She was only 47, she has always been very lively, I am really saddened!"

Hacken Lee Hak Kun posted two photos from his television series with her, SUMMER OF 88 on facebook. "My first TVB series SUMMER OF 88 was with her. She played my sister. We also worked together on a single. At such a young age, it's truly regrettable! Friend, rest in peace!"

Hacken recalled, "Back then she was an innocent girl, taught me a lot about television. She was like an elder because she worked on movies before. I am very surprised and saddened to hear the news."
Posted by hktopten at 6:14 PM