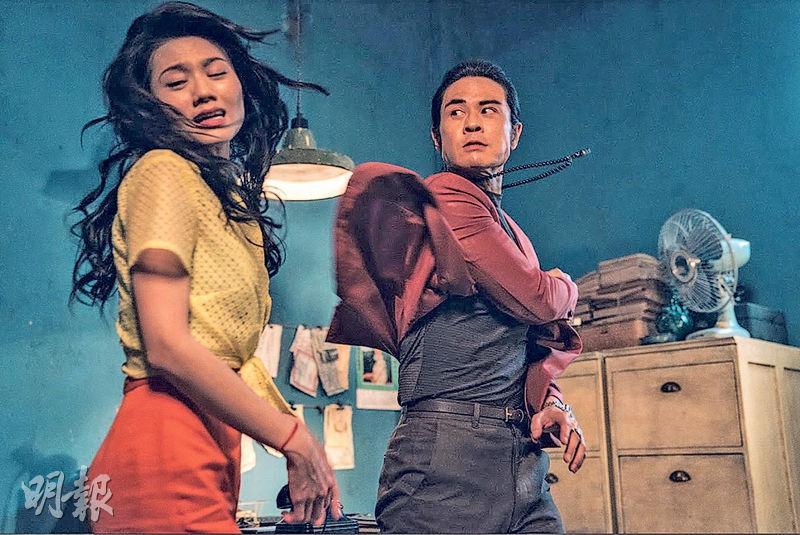 For their new film MASTER Z: IP MAN LEGACY (IP MAN OI JUEN: CHEUNG TIN CHI), Kevin Cheng Ka Wing and Chrissie Chau Sau Na had to shoot a slap scene on their first day at work, which left Sister Na with a red and swollen face that required ice treatment. Because Ka Wing played the evil, cruel and violent villain, he often abused the drug addict bar girl Chau Sau Na. Ka Wing revealed that before taking his mark he wanted to find something in common with elder Michelle Yeoh (Yeung Chi King) to communicate with, unfortunately it was hard to find.

Having made many slap scenes, Ka Wing originally was fully prepared for Sister Na to experience a painless slap. Unfortunately director and action director Yuen Woo Ping (Lord Eight) was not satisfied and asked whether Ka Wing could hit for real many times. In the end he barely accepted a take after Sister Na was red and swollen from all the slaps. Ka Wing said, "The first time I only used my fingers, it was really loud but didn't hurt. However Lord Eight asked whether I hit her. For the second one I used fingers and half a palm, it was a little harder but Lord Eight was still not satisfied. In the end I was out of ideas and had to tell Sister Na I would hit for real. My entire hand hit as hard as it could, but Lord Eight was still suspicious. However he saw Sister Na's face was red and swollen, she could not go on any longer. He could only accept the take."

After many slaps Sister Na remembered that the entire world went quiet because the slaps were near her ears. Although she did not faint she needed to apply ice. Aside from the slaps, Ka Wing also forced drugs down Chau Sau Na's nose and mouth. She said, "We used dextrose powder as a substitute. Because the dextrose would solidify inside the mouth and the nose, I couldn't breath at all. I felt like I was suffocating, but the director didn't yell cut. I thought why didn't he yell cut yet, I really felt like I was dying." Although Ka Wing often abused Sister Na, after each take he would immediately apologize to her. Sister Na was rather comforted.

Ka Wing in the film played Yeung Chi King's sibling. Because it was their first collaboration, before taking his mark Ka Wing wanted to find something in common to communicate with his elder with. However he kept stumbling. "I asked Michelle what was she busy with lately, she said that she was making STAR WARS. I didn't know whether I heard wrong, it probably was STAR TREK. It didn't matter, I said I saw STAR WARS. Later I asked what the difference was between Malaysia's Datuk and Hong Kong's MBE title? Michelle said nothing special, it was only more convenient for business. However she was not in business." Without any connection Ka Wing felt more like a failure. He mustered up his courage again and asked Michelle where she was staying in longer lately, Hong Kong or Malaysia? Her answer was actually Paris, Brussels and even Switzerland. Ka Wing admitted defeat and said that he has been to Paris and even praised how beautiful the scenery was. Then he gave up on looking for another topic with Michelle.

Soon to be a father, would Ka Wing play less villain or action scene? He said that as long as they were reasonably safe he would make fight scenes. Although now he has his own family, he felt that family and career could benefit each other. In addition the film schedule was very suitable for him, as it did not occupy as much time as a television series would. He admitted, "I have to make milk money, I would sensibly labor and do what is within my capability. I don't want anything tragic to happen." Did his state of mind change after becoming a father? Ka Wing said, "The stages are different, it's a maturation. I would want to be a responsible father and husband. With family and child I would feel I have limits. I am not adrift, as I feel very solid." Having been single for a long time, Sister Na was envious of Ka Wing, unfortunately she has not met the right person . She would quietly await the arrival of fate.
Posted by hktopten at 1:45 PM