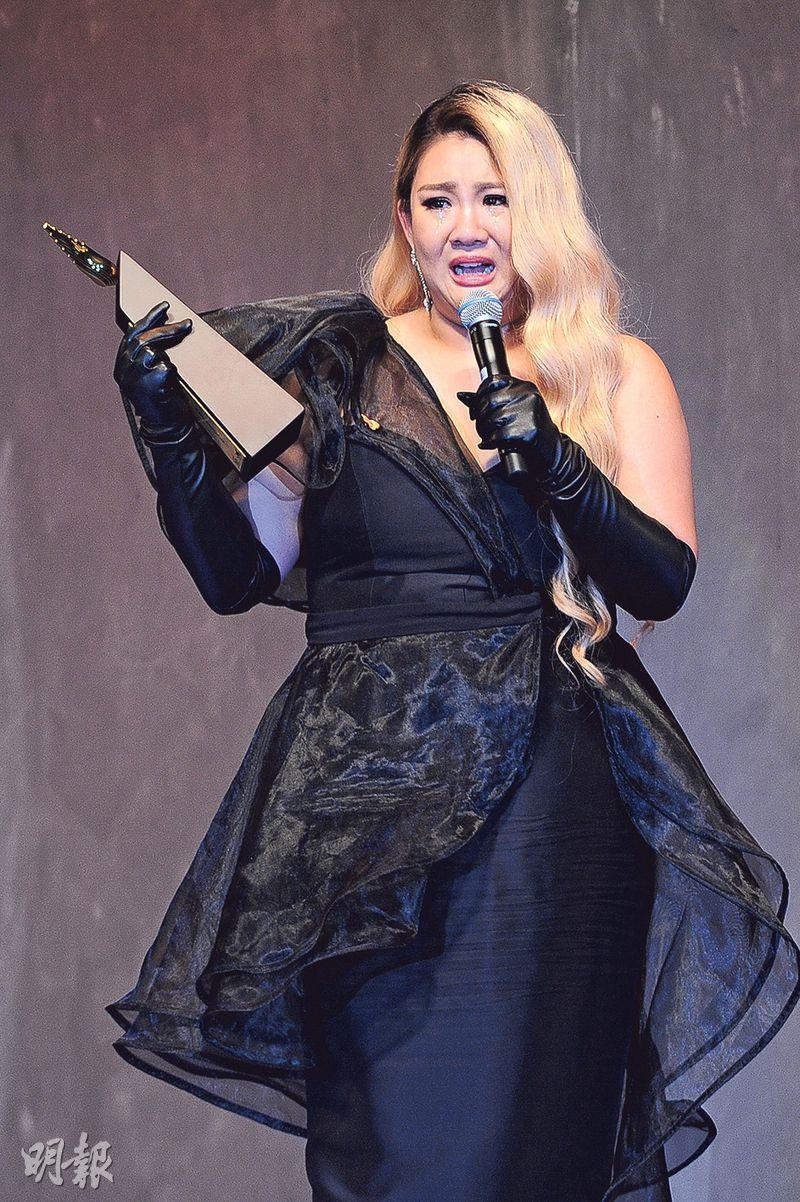 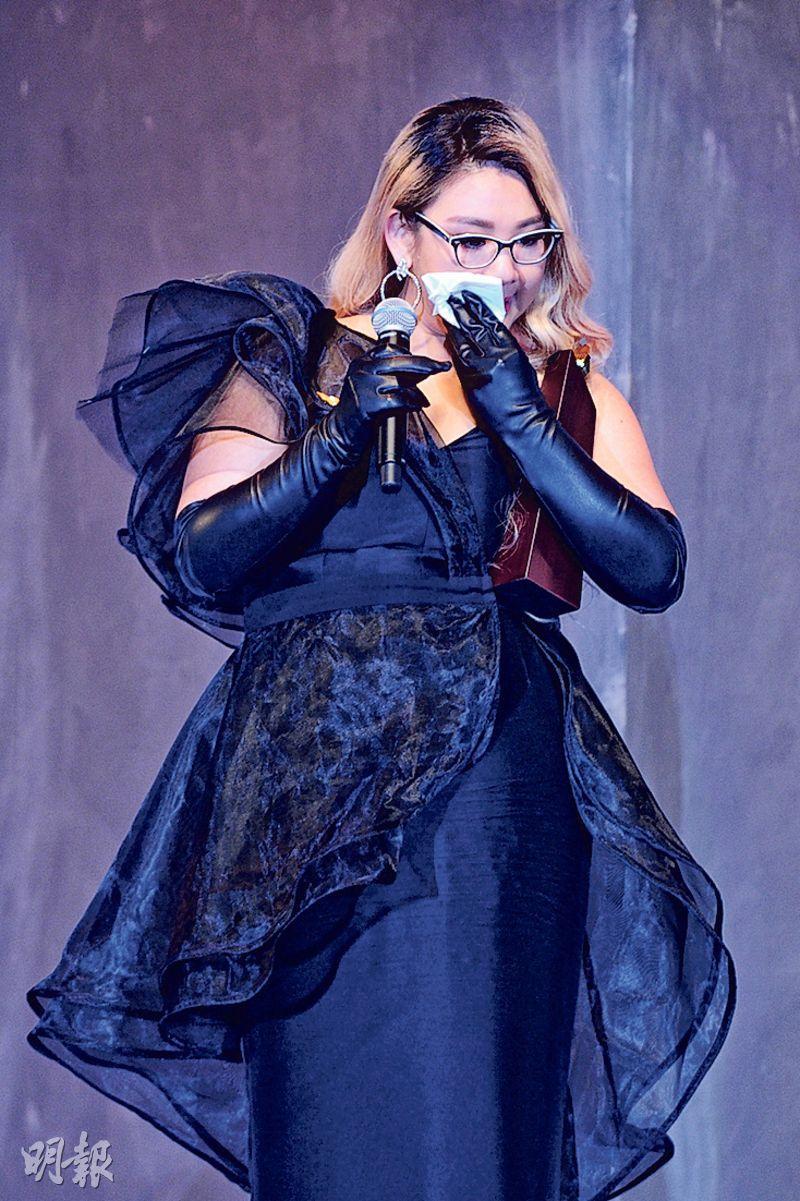 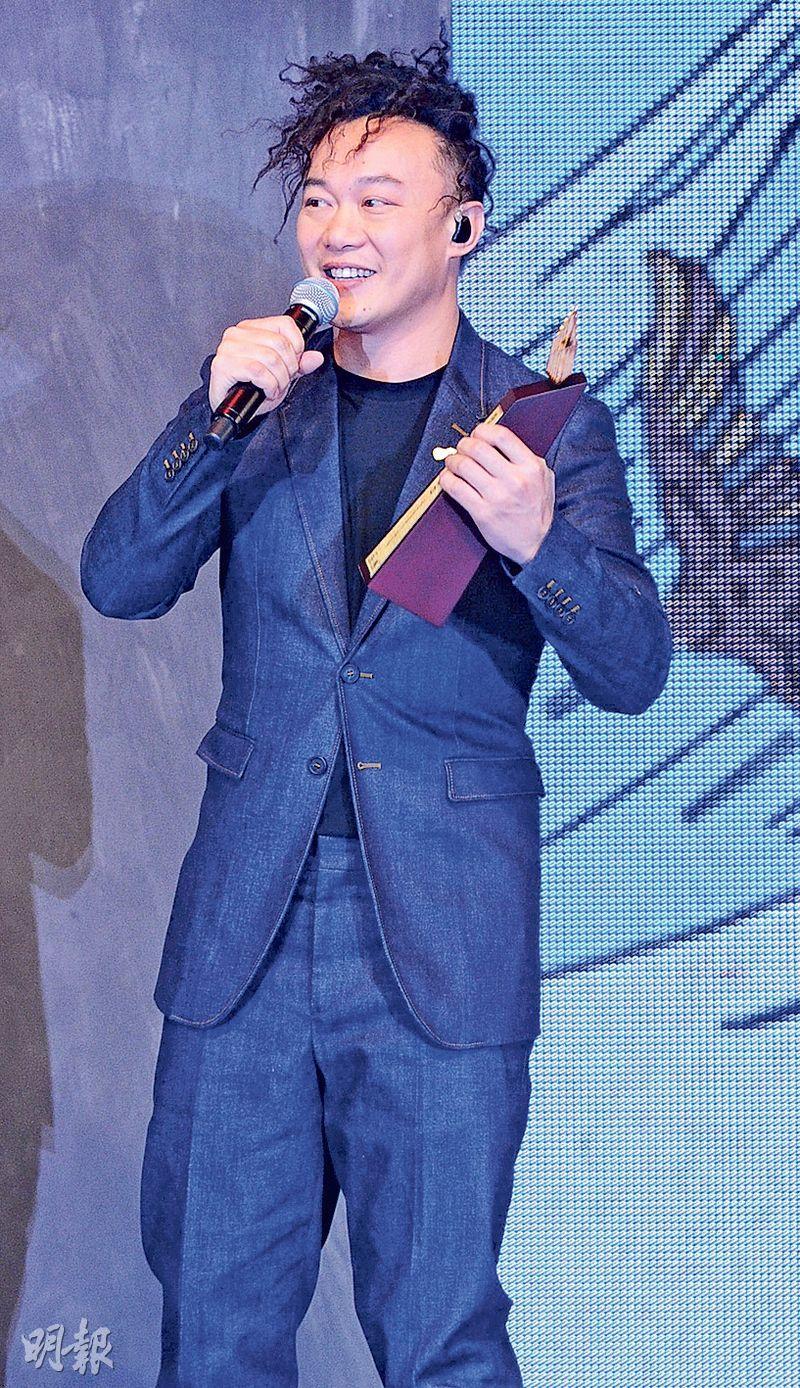 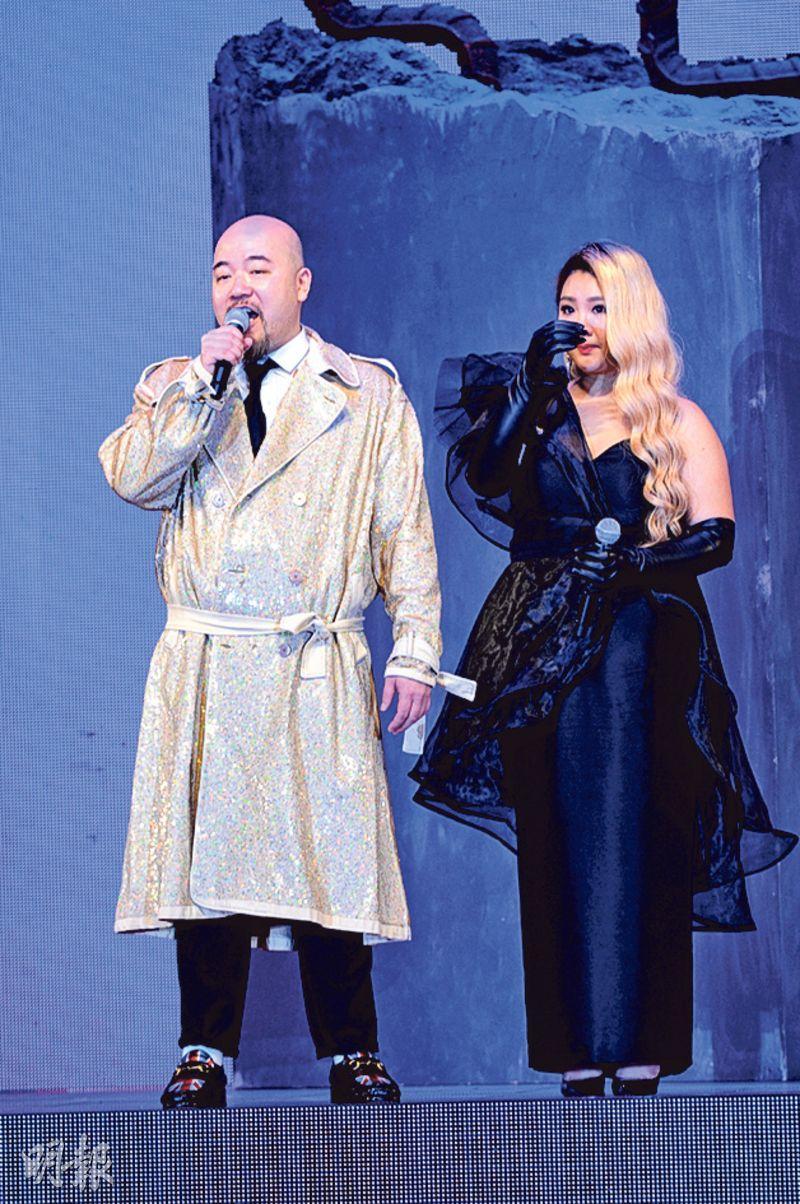 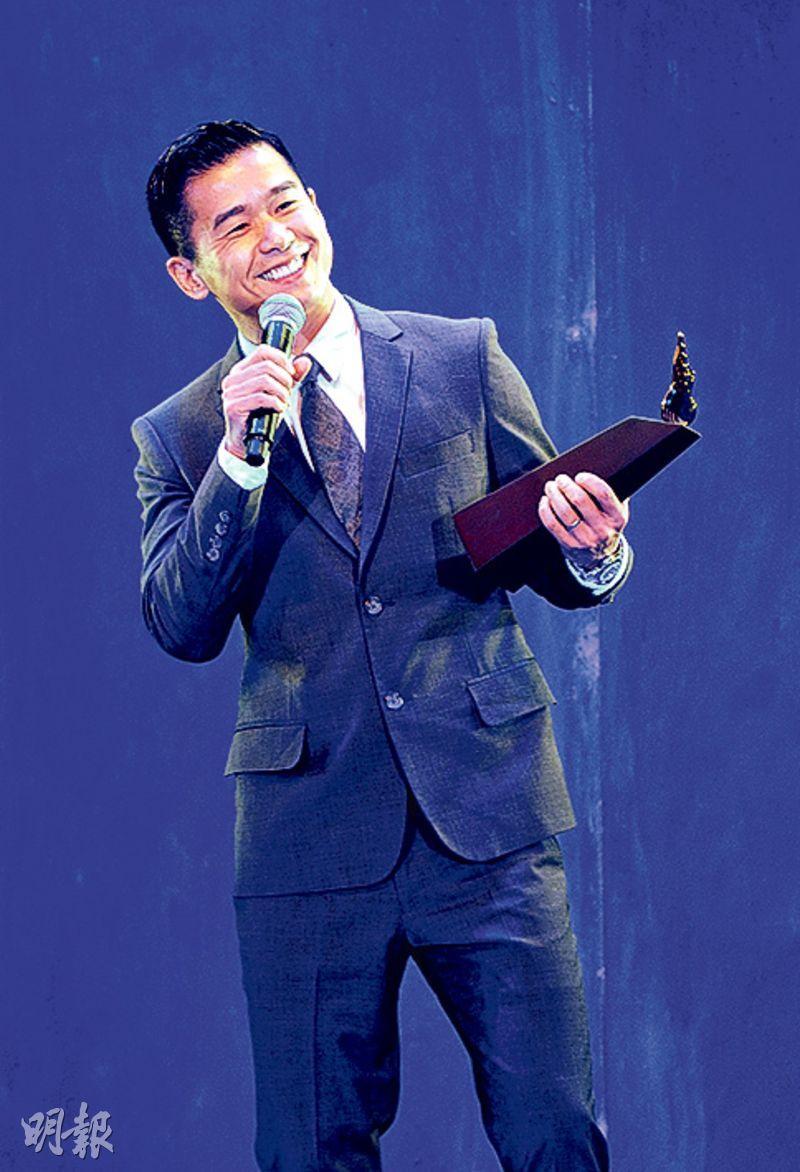 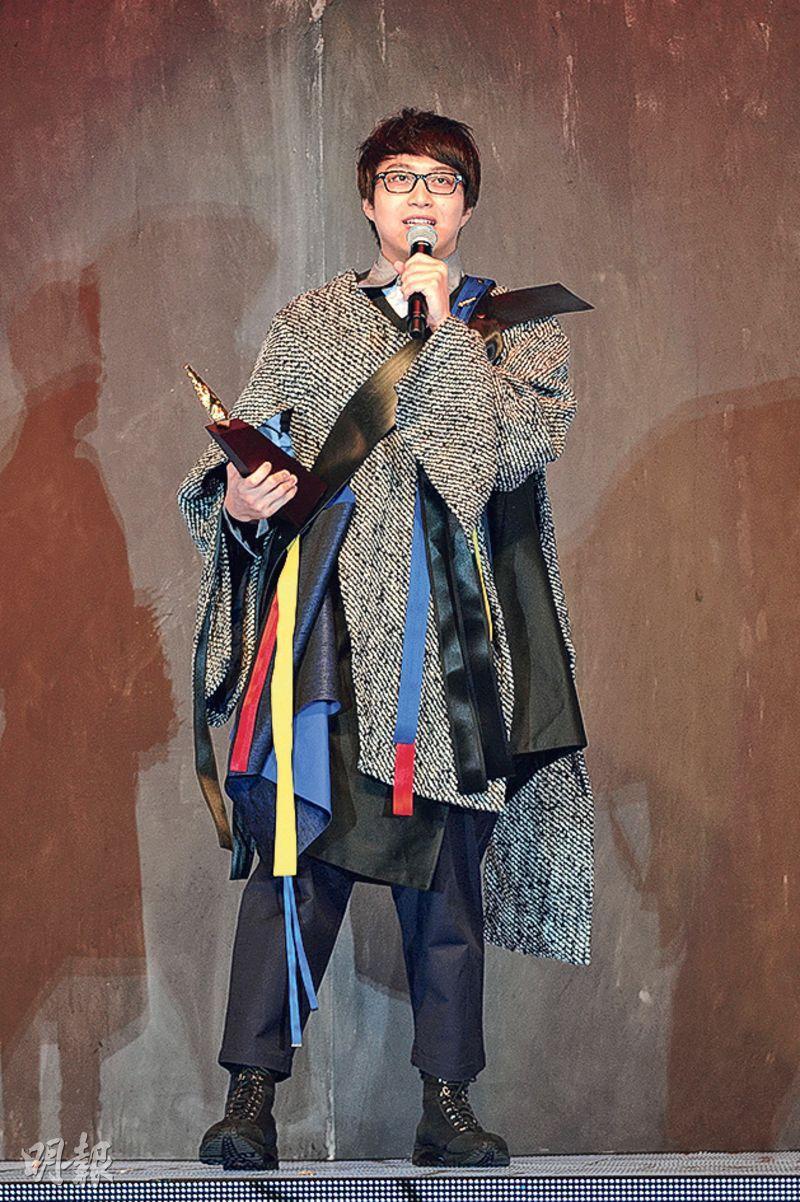 2016 Commercial Radio Ultimate Song Chart Awards took place last night and presented 43 awards. Almost 100 singers attended. The evening was filled with tears. Joey Yung Cho Yi and Hins Cheung King Hin repeated as female and male singer gold prize winners. The silver prize went to Gin Lee and Jason Chan Pak Yu and the bronze prize to JW and Alfred Hui Ting Hung. Joey won her 11th Ultimate Female Singer Gold Prize and set a new Ultimate record. Her song NO ONE KNOWS GEMINI was Ultimate number eight. "This year is already the 18th year I participate in the Ultimate Awards. Thank you for continuing to 'invite' me to play. I really like to see everyone on January 1st, which gives me a huge sense of belonging and warmth." Joey lamented that now singers have few opportunities to sing. She was comforted when she heard her song being played.

Joey's J-POP won the Ultimate Record. She screamed, "Wow!" She was so nervous that her voice was shaking. She referred to her company as the "light" because the company would not choose the song that she would. She also revealed that she had a "language barrier" as she did not know how to express herself. Yet her producer Fung Hong Ming was able to understand her, he was like her dad. Later Joey broke down when she thanked former producer Shu Man. Speaking of Mother Yung's health problem, Joey cried again. Producer Fung Hong Ming wiped her tears for her. Joey praised her mother as a very good girl, very strong. She did not worry her too much so she had even more motivation to work.

"Song God" Eason Chan Yik Shun did not attend the Ultimate Awards in the past two years. Last night Eason descended to the stage as the surprise guest. Eason with his own Cantonese song release last year FOUR SEASONS won Ultimate Song again. Eason said, "Maybe you have heard the rumor, this song originally didn't belong to me. Lucky fell to me, I didn't steal it. Choi Wing Yan (Evelyn) is the real performer." However the performance Eason had stage fright, for which he roared once before he missed his cue again. He helplessly said, "So bad!" He took off his head set, walked and shook his head twice. After the performance he awkwardly smiled and said, "Hahaha! Happy New Year everyone!" Later he again performed with the band RubberBand as a guest performer.

Joyce Cheng Yun Yi with GODDESS won three awards and cried nonstop. She took out of little silver bag on stage and put on her mother Lydia Shum Din Ha's trademark glasses. Then she cried as she said 9 years ago she lost the most important person in her life. She told her mother that she would be good and make her proud. She said that she was not as apt at speaking as Mommy. She was also grateful for the over 300 complaints on her back then yet someone was still willing to sign her. She also thanked people who disliked her.

Last year's "Rookie King" James Ng Yip Kwan won My Favorite Male Singer again. He did not cry this year but he got choked up. "Someone asked me if I wanted to accept awards on the stage, I of course said I felt normal about it. Actually I am rather afraid of coming to the stage. I am not afraid that there would be no applause, but I am afraid of being jeered. Thank you everyone for giving me a very beautiful journey, I got a speeding red van and went to a lot of places. Now it is time to get off, but I hope every year I can sit here and keep working on Cantonese songs."

Former Ultimate Male Singer gold and bronze prize winner Pakho Chau was rumored to be suspended for deciding not to renew his record company contract. Last year he had no song release, but he still attended like a professional. I Love U Boyz joked, "Pakho didn't sing all year, we are very worried for him."

Jan Lamb Hoi Fung defeated Charmaine Fong Ho Man and Endy Chow Kwok Yin to win the Ultimate Music Creator gold prize, but Lamb Hoi Fung was the organizing radio station's DJ. When he accepted the award he joked that he did not deserve the award and about suspicion of race fixing. "Really......I can be here, proving that the death bell has tolled for Hong Kong music! The creators in the audience have to work hard, to prevent me from coming up here again."

Lamb Hoi Fung also helplessly said that he did not have much to say because the gold prize winner had to perform. "Boy am I screwed! I even have to be the first one to sing tonight. Sorry everyone, just two minutes, don't worry."

When singer Joyce Cheng Yun Yi campaigned for second round votes for My Favorite Song for GODDESS, she asked the lyrics writer Wyman Wong for help. Wyman admitted that when he wrote the song for Yun Yi he was returning a favor. He recalled 20 years ago when he was a radio DJ, once at a television station taping he ran into Lydia Shum Din Ha. She went over and warmly greeted him. He said, "There was a fat person coming over to tell me my clothes was very pretty and ask me where I got it. She was Shum Din Ha. Treating people well isn't guaranteed. I have to return this favor to her. Luckily ten years later I ran into her daughter. This is the big favor in return, but some favor the beneficiary has to be talented enough to accept." Yun Yi was all tears.

Started with a singing contest seven years ago, Tang Siu Hau won the "Rookie Gold Prize". When the host introduced her she was revealed that she had trouble with her HK$ 7,500 rent. Siu Hau was already in tears when she appeared on the stage. She said, "After seven years I am finally on this stage." She also thanked her assistant. "She promotes for me on the radio while she is pregnant, It really is very dangerous." In order to thank singer Pong Nan for helping her with her record despite being ill, Siu Hau said, "Next time I am letting you win at mahjong!" Later she also revealed that her sister in order to keep her in music worked another job. She immediately apologized to her parents. "Sorry, I haven't given you guys money in a long time." This year's Rookie awards all went to female singers.

Andy Hui Chi On with NON SECURE ZONE won the top ten number six. He brought up his embarrassment at a past award show. "The first time I came to the Ultimate stage was when I won an award for LOVE YOU in 1998. That time I broke the Ultimate record. During the announcement I went to the bathroom. The song was around three minutes long. I rushed out and didn't even get to sing." He even invited the band Dear Jane that created the song for him to perform together.