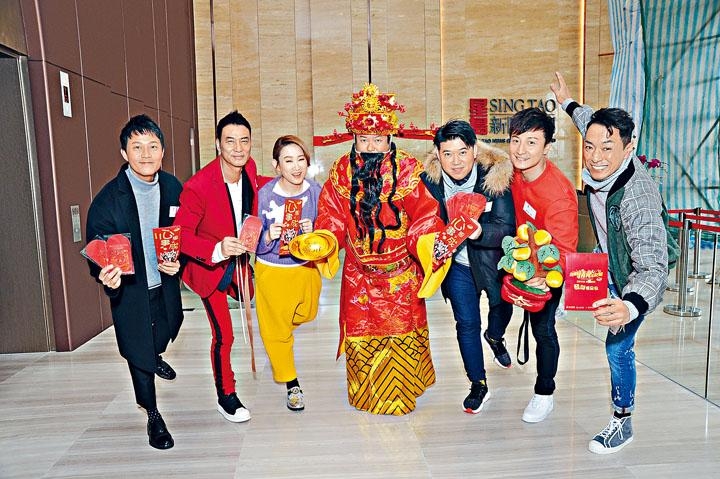 This year's Hong Kong Film Award host will have Louis Cheung Kai Chung in place of Ronald Cheng Chung Kei, with Cheng Chung Kei's former wife Charlene Choi Cheuk Yin. Hong Kong Film Award Association chief Derek Yee Tung Sing said, "When we contacted Ah Sa, she wasn't confident that she would be able to do the job and felt the pressure. However we have confidence in Ah Sa because she has stage experience." Why did he not ask Cheng Chung Kei to stay on as a host with Ah Sa? He asked reporters why. Reporters said that they were married. Siu Bo said, "I didn't even remember until you mentioned it. I haven't asked my former girlfriend either. (Did you ask Maggie Cheung Man Yuk?) The audience is too young to know."

Yesterday Ivana Wong Yuen Chi and Michael Ning (Bak Chi) were responsible for the announcements. Ivana was so nervous that she ripped the list. Bak Ji said Supporting Actress instead of Leading Actress and was often tongue tied.

Lau Tak Wa with SHOCK WAVE was nominated for Best Actor. He said, "Thank you everyone for your love of the SHOCK WAVE character. This character was created by design, to be recognized of course is something to be happy about. Actually I thought the bomb expert gives people a very distant and very hard to come in contact feeling, but in real life, he really lives around everyone, very close to them. This time the film and the character received everyone's recognition. I sum it up with 'I will keep trying!'"

Cheng Chung Kei happily said, "I am already crazy happy about the nomination, it's very rare to be able to make a movie about music because it is few in Hong Kong. I have to congratulate the director at the same time, to have such a heart to make this subject. Thank you voters. This year I can finally watch in the audience."

Koo Tin Lok was very excited. "I am very grateful for the voters and the audience for the recognition. I want to give special thanks to then entire PARADOX team, director Yip Wai Shun, producers Mr. Cheang Pou Soi and Mr. Paco Wong, my co-stars Tony Jaa, Wu Yue, Chris Collins and Cai Jie, and to give a special congratulation to Ka Tung and my on screen daughter Hanna on her Best New Performer nomination. I am happy for her! Most importantly I have to thank action director Hung Kam Bo for his attentive direction, from which I benefit a lot. Congratulations Big Brother Big on the nomination! It absolutely is not easy to be able to run into a team with such heart, thus I am full of confidence in the team and myself. I hope to receive good results at the presentation ceremony!"

Best Actor and Best New Performer nominee Ling Man Lung responded, "Thank you very much to the awards for this recognition and encouragement, I am very excited and happy to be nominated. To be nominated with elders I saw on the silver screen when I was little, I am very surprised and grateful. I really never even imagined it. I will keep working hard!"

First time Hong Kong Film Award nominee Chau Sau Na happily said, "this nomination to me is this New Year's best gift. I really never thought about it. My goal is for 29+1 to have different nominations. This time I am even happier about the director and Yun Yi being nominated as well. When Yun Yi called me I already knew what happened, I never expected to be so emotional. After seeing people continuously congratulating me, I was very emotional and touched. Of course I am the happiest about everyone on the team's nominations. Thank you to all who worked on the film. They really contributed a lot so we have this film to present to everyone."

Earlier winning the Hong Kong Film Critic Society Best Actress, Tang Lai Yun received the news of her first Hong Kong Film Award Best Actress nomination from colleagues while working in Nepal. She felt very happy and surprised and congratulated THE EMPTY HANDS for its numerous nominations. She also congratulated her other film SOMEWHERE IN THE MIST on its several nominations. She said, "Now I start to think about what to wear that night, thank you everyone for your support and encouragement."

Best Director nominee Pang Sau Wai was very happy and surprised. She said, "Seeing the film's many nominations I felt surprised. On a certain level I expected Chau Sau Na's nomination. When Yun Yi was nominated for Supporting Actress as well, I was very excited. In addition the film's Best Original Score and Song (nominations), I really wanted them to be recognized from the start so I was so happy that I was crying over their nominations. As for my own three, they were just too unexpected. I haven't been this excited in a long time. The nominations are already recognition, thank you to friends who voted."

Best Supporting Actor nominees with SHOCK WAVE and CONCERTO OF THE BULLY Keung Ho Man replied, "When I learned that I had two films nominated, I felt very surprised and happy. Because last year I was already nominated for Supporting Actor, I didn't know whether I would have the chance again this year. Last night I was fine until my manager sent me a message to congratulate me, then I stared at my wife and kept shedding tears. Thanks to SHOCK WAVE's director Yau Lai To and Lau Tak Wa for enabling me to perform time and again; thanks to CONCERTO's director Fung Chih Keung, Tin Kai Man for my chance to perform in this comedy. Sometimes I would still question my own substance, but I definitely would enjoy the entire process. Thank you to my family, my management company and friends who supported me."

Best Supporting Actress nominee Cheng Yun Yi admitted that she was surprised. "Because I never thought that I would be nominated, because I wasn't familiar with this world of film. This world didn't belong to me, I am in music. So this is very crazy, very crazy!" Shaw Yam Yam excitedly said after hearing that she was nominated for Best Supporting Actress, "Wow, really with so many good actors and big films, I thought no way. Later when I was announced, I really was very happy."

Playing Koo Tin Lok's daughter in PARADOX, Hanna Chan was very surprised to be nominated for Best New Performer for her first film. "Because to me, I was already very lucky to be a part of PARADOX and play this character of Lee Wing Chi. I wanted to thank Director Yip Wai Shun the most, without him choosing me for this character I wouldn't have the chance to be nominated. This time I already gave my all to the performance, I thought that the nomination was already enough. I am pleased. My character ultimately had limited space to perform so I am not confident about winning. All the nominees are good actors, I won't seem them as competition because I am already very happy about being able to contribute to Hong Kong film. I really want to make movies for the rest of my life! Actually it doesn't matter who will win New Performer, instead I really want my on screen father Koo Tin Lok to win Best Actor. On the set I completely sensed his presence."

Best New Director nominees have an upper limit of directing two movies, thus LET'S EAT (HOI FAN LA!)'s Chapman To Man Chak was able to be nominated with THE EMPTY HANDS. To Man Chak said that his nomination was due to the team including Tang Lai Yan. "My New Director nomination means Hong Kong film lacks new directors! I am so bad that you know what's going on from the nomination! Haha!"

WHEN I LOVE YOU (THIS IS NOT WHAT I EXPECTED)
Composer: Chan Kwong Wing
Lyrics: Han Han
Performer: Cheer Chen

BEST FILM FROM MAINLAND AND TAIWAN
THE GREAT BUDDHA+
THE BOLD, THE CORRUPT AND THE BEAUTIFUL
YOUTH
DUCKWEED
WOLF WARRIOR II

PROFESSIONAL SPIRIT AWARD
Pauline Yeung
Posted by hktopten at 2:57 AM