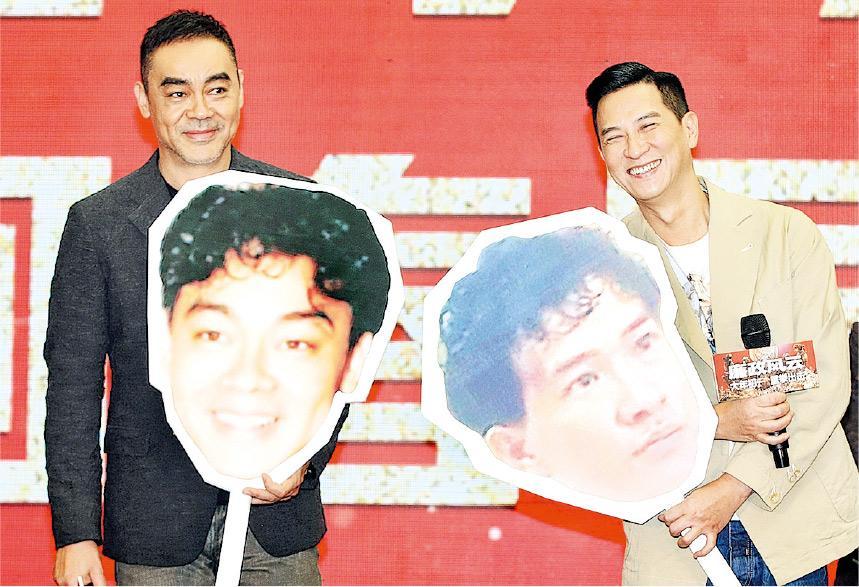 Sean Lau Ching Wan, Nick Cheung Ka Fai, Karena Lam Ka Yun, Alex Fong Chung Shun, Carlos Chan Ka Lok yesterday attended their new film press conference in Beijing. Ching Wan and Ka Fai would return to their younger days with computer generated technology in the film. When they saw "their 21 year old selves", the Best Actors could not help but have a little fun. Ching Wan said, "Ka Fai really is very special, when I saw how he looked when he was younger I couldn't image how he is now. I am very simple, with just a look you would know that I look like a 'star'." Ka Fai said, "When I was younger I was angrier, the younger Ching wan was more innocent and kind."

Cheung Ka Fai's Cantonese accented Mandarin has been criticized as rivaling that of Louis Koo Tin Lok's. Yesterday Ka Fai introduced himself in fluent Mandarin and asked the reporters, "Do you understand me this time?"

Ching Wan and Ka Yun in the film played a couple. Ka Fai innocently became their "third party". Ka Fai joked, "The break up fee for the third party is too high!" In the film when Ching Wan picked up Ka Yun at the airport, he brought a sign with dog photo and the words "old lady". Ka Yun even asked for a photo of Ching Wan with the sign. She explained, "He looks like the dog, especially his brows." Ching Wan added, "I wasn't saying the old lady was the dog. I was the dog."

Carlos Chan Ka Lok thanked the director for arranging a very "mean" superior for him due to his lack of experience, so he was able to learn. Ka Lok's on screen superior Ching Wan denied that he was mean, saying that Ka Lok was referring to Alex Fong Chung Shun. Ka Lok stressed that he was talking about Lau Ching Wan. "Brother Ching Wan didn't have much expression when he was quiet, so I would be very scared just to see him -- just like the character in the film."

He also said that the director's casting was great, because his Papa loved to watch Ka Fai, Mommy liked to watch Ching Wan, he liked to watch Fong Chung Shun and other family members were Lam Ka Yun fans. Thus his entire family would see INTEGRITY together.
Posted by hktopten at 2:45 PM