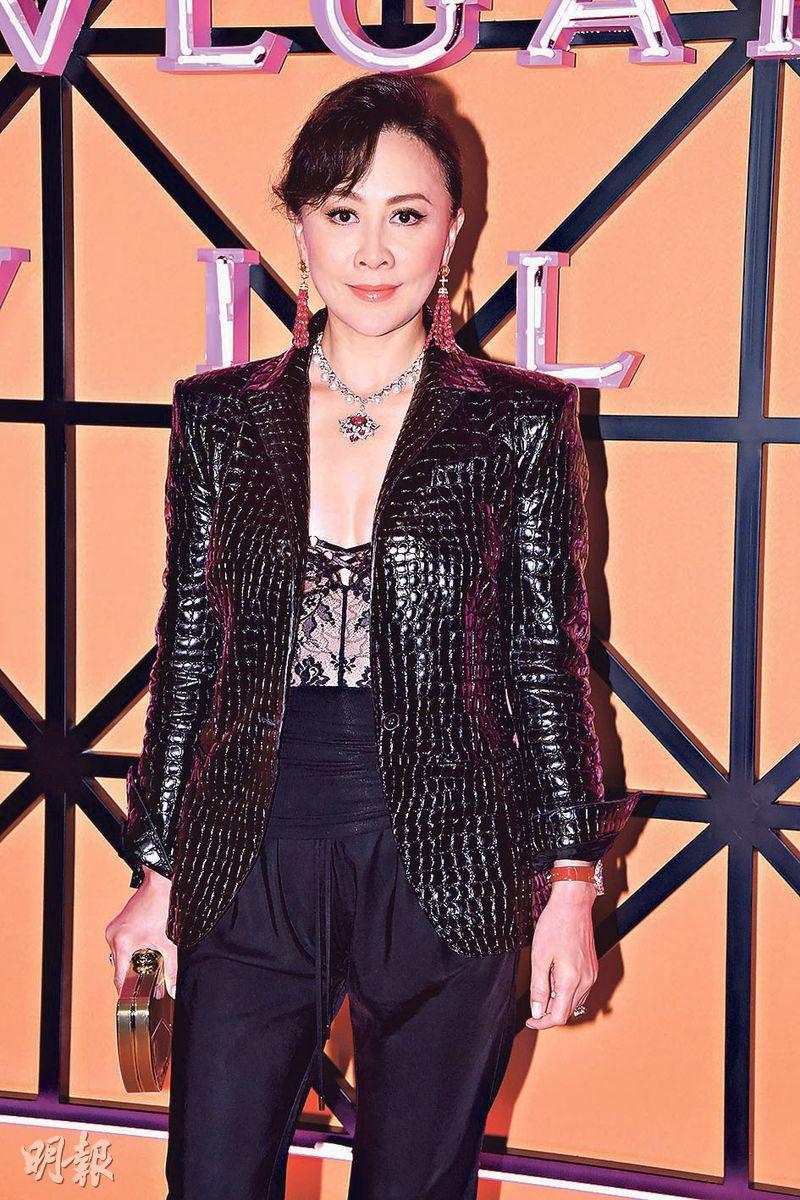 Carina Lau Ka Ling yesterday attended a jewelry event. She admitted that she would reward herself with jewelry, especially she grew older and her finances permitted her to. She would cheer herself up with jewelry. Earlier on vacation with her husband Tony Leung Chiu Wai, Ka Ling returned to work in Hong Kong first. She revealed that Wai Jai was still on his long vacation. As Wai Jai's manager Ka Ling joked, "He's outrageous, if we rely on him we would be in trouble!"

Speaking Ka Ling turning her Shanghai mansion into the film IN THE MOOD FOR LOVE (FA YEUNG NIN WA)'s style? She said that her Shanghai home would be for Mommy. Her place for entertaining in Hong Kong was the one was the IN THE MOOD FOR LOVE decoration. She also revealed that she only had properties in Shanghai and Hong Kong. "Don't make me sound like a landlady. I purchased properties in Hong Kong, I have been buying since I learned to make money!" Would she like to invest overseas? Ka Ling said that she would like to, but no wealth came from no effort. She would have to maintain them but would be reluctant to rent them out. If she would not live in them she would feel they would be wasted. She was better off with jewelry that she could wear at anytime.

Ka Ling and Wai Jai spent the New Year together in Japan on a ski trip, then she went to Australia while Wai Jai kept playing. She said that now Wai Jai has many hobbies like water skiing, BMX and biking. He also did not wear masks but many started to recognize him. Did Wai Jai want to become an amateur athlete? She said, "Healthy hobbies are good!" Reporters joked that she would permit her artist to be on such a long vacation. Ka Ling said, "That's right, he's outrageous. If we rely on him we would be in trouble, but as long as he's happy it's fine. He is looking for a breakthrough point!" Ka Ling admitted that Wai Jai has many offers, has she chosen any for him? Ka Ling said, "I am not qualified, I pass them to him. Actually now he wants to rest and find a new direction. For such a good actor with a score in the 90s, a breakthrough for him would be very hard. He wants to find a new peak!"

The Secretary of Finance Paul Chan Mo Po in the financial budget announced that the Film Development Fund would receive HK$ 1 billion in hopes that the industry would use the new added fund to expand the scale and the financial assistance of the First Feature Film initiative and by half and raise the upper limit of the film production financing plan's production budget to support the domestic mid scale budget film production.

The Lau Ka Ling produced and starred film IN YOUR DREAMS (YI CHING CHUN DIK MING YI) was the 2nd First Feature Film Initiative winner. Ka Ling after learning about the budget's support for film industry development happily said, "That's great, it's good news. It's a shot of confidence so Hong Kong film industry should never give up. Hong Kong has such great natural conditions and many excellent professionals. In the past it has led Asia. It must stay ahead of others so no one should give up. The government should have done this long ago!"

The Hong Kong Film Archives also will receive HK$ 20 million to add technicians and equipment, to preserve necessary sole film copies and digitalize films, and to give the next generation the chance to know and appreciate valuable Hong Kong film cultural artifacts. Ka Ling also showed her support. "Actually a film museum needs to exist, everyone also has the duty to promote the film industry!"
Posted by hktopten at 2:00 PM