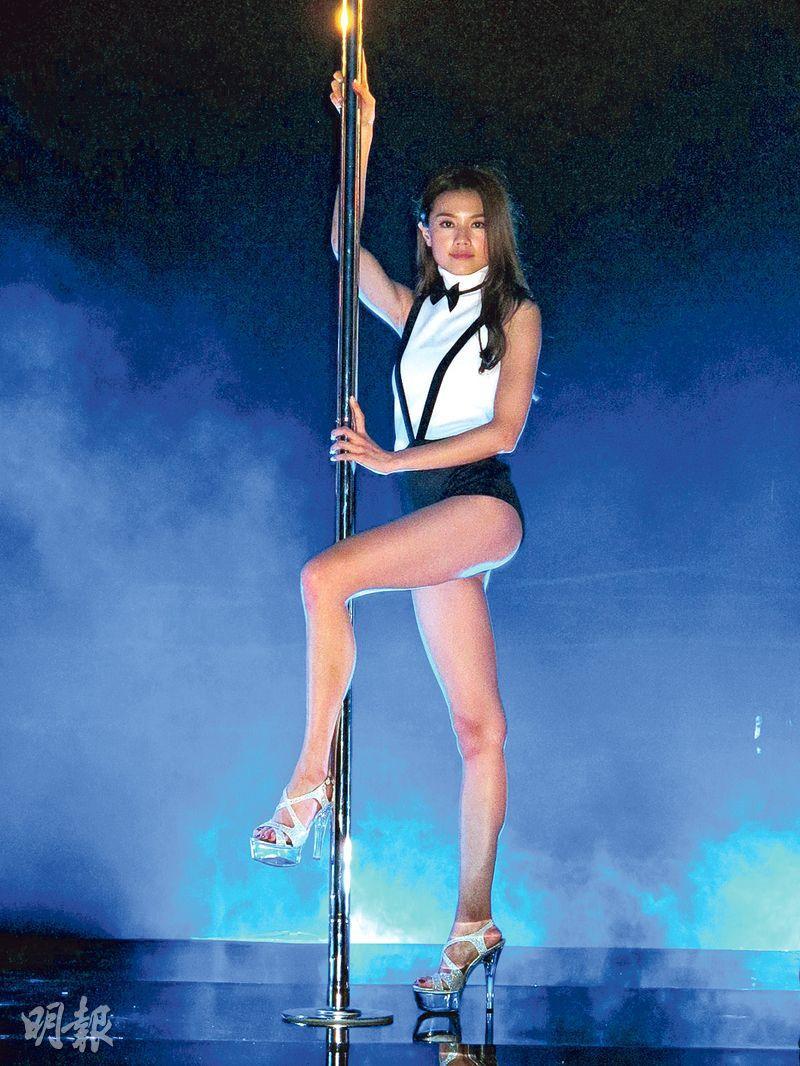 Chrissie Chau Sau Na, Hedwig Tam Sin Yin, Larine Tang Yueping and Babyjohn Choi Hong Yik yesterday worked on a pole dancing scene for the Lawrence Cheng Tan Shui directed new film YUPPIE FANTASIA 3 (SIU NAM YUN JAU GEI 3 ji NG GA YAU HEI). Without any dance background Sister Na joked that she danced like a robot. Although she took time to attend dance lessons in preparation, during the official shoot she had to wear high heels and it became another matter. She said that after the wrap she will take two day offs for massages to make up for it.

With an old leg injury Sister Na admitted that some of the pole dancing moves were more difficult for her, like when she knelt down she could not sit down completely. She did not plan to have operation to thoroughly treat the problem because the doctor said that surgery may not lead to a complete recovery. Yesterday wrapping up her production, Sister Na said that the most exhausting was the pole dancing scene. However she has fallen in love with this dance. Unfortunately she had no place to practice and she could not install a pole at home. She could only dance in the film world.

Ah Tan joked that his luck has run out in the film. Later he will have a scene in which Harriet Yeung Sze Man seduces Louis Cheung Kai Chung. He said, "Because Ah Chung asked for a long time, I offered great sum for Shrimp Head to seduce him. Two great actors actually have never worked together before. This funny seduction scene won't be made too vulgar."

As for the pole dancing scenes, Brother Tan designed it for his younger daughter. "Everyone knows my younger daughter studies archaeology. After returning to Hong Kong she went to take yoga and pole dancing lessons. I made this scene for personal use for her. Actually both daughters guest starred. They played vain office girls who often made faces at me behind my back. They were all expressions that they w would make at home." Ah Tan remembered when his wife was with the second child, she brought the older daughter to guest star in a film. Now his daughter could not be more excited when she watched that scene. He said, "I asked the Old Lady to guest star, but she would rather die then to appear on camera again."
Posted by hktopten at 9:06 AM