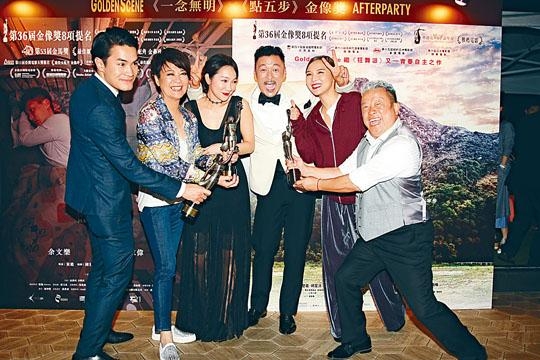 Best Supporting Actor Chi Wai said that he was very happy to be able to win with Kam Yin Lng, but he regretted that Lok Jai did not win. Chi Wai said, "Of course it's regrettable, but I told my son this too, the most important is for the audience to like this movie, winning an award is just a bonus!" He said that MAD WORLD's second week box office was better than its opening week. The news reported that a father did not give up on his daughter with an emotional disorder, even used MAD WORLD's Chinese title as the subject. Instantly the film became the talk of the town, as the internet was filled with comments.

Chi Wai admitted that since the Golden Horse Award he has not stopped having celebration diners. He ran into Shi Nansun backstage. She said that his award was the hardest to win. He only won because he was great with people. Chi Wai helplessly said, "Does luck with people have anything to do with it? I don't dare to talk about that. I just know I am happy!" However he was certain that Kam Yin Ling's award had nothing to do with lucky because she overwhelming won. Chi Wai revealed that Kam Yin Ling could not sleep the night before the award show and did not understand why she was still so nervous despite having won before. Kam Yin Ling explained that this time she won both the Golden Horse Award and the Hong Kong Film Award with the same move, which was a dream come true. However she has not set her next goal. Chi Wai joked that the next goal would be a MAD WORLD adult video version. This time he played a couple with Kam Yin Ling but never saw her. Instead Lok Jai bathed her.

The Best Actor award brushed by Yue Man Lok. He revealed that he was not disappointed. He understood that it was very hard for every actor in a movie to win an award, but he was happy that a few days before the awards he kept receiving congratulatory messages from friends. Lok Jai stated that he thought about winning and believed that everyone would have a moment of fancy. Yet he did not write a speech before hand. He said, "If I won, it would have been because I would have a chance to thank people I wanted to thank." Did his girlfriend comfort him? He said he would check his phone once he got home. His girlfriend has encouraged him long ago.

Tony Wu Tsz Tung with WEEDS ON FRE won the Best New Performer award. The theme song ANTHEM OF SHATIN MARTINS also won the Best Original Film Song. Wu Tsz Tung admitted that before the award he was not too nervous, but at the moment of the announcement he became rather nervous. After he won he told his girlfriend Stephanie Au Hoi Shun, who congratulated him and set a dinner date to celebrate. Wu Tsz Tung then went to the SISTERHOOD (GWUT MUI) event to cheer up[ the defeated Fish Liew Chi Yu and Jennifer Yu Heung Yi.
Posted by hktopten at 8:21 PM