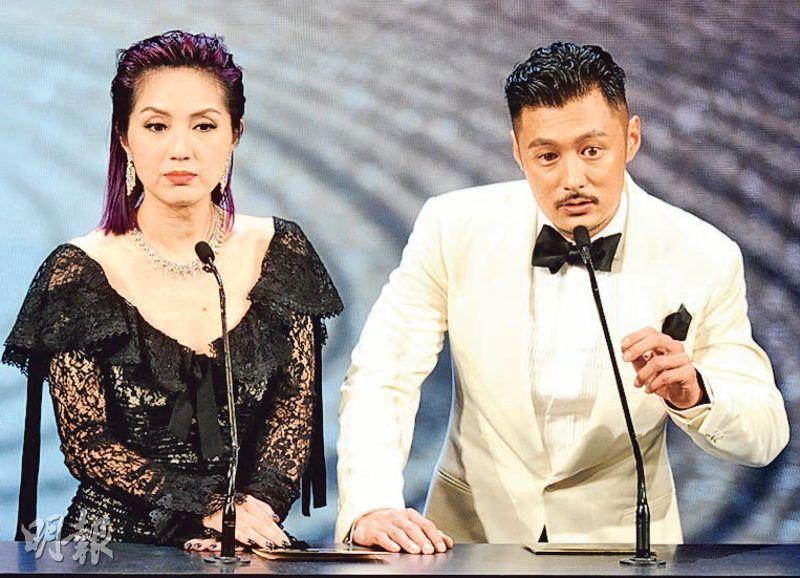 Miriam Yeung Chin Wa yesterday promoted her film LOVE OFF THE CUFF (CHUN GIU YU JI MING) on the radio. She revealed that Hong Kong Film Award Best Actor nominee and guest presenter Shawn Yue Man Lok was very nervous. He asked to go over the 20 second script 4 times. He even went over it in the dark before going to the stage just in case.

First time Hong Kong Film Award Best Actor nominee Yue Man Lok in the end lost to Gordon Lam Ka Tung. As a friend Yeung Chin Wa said, "He doesn't need comforting, he is fiat ne. However all night he was very nervous. HE finally understood that the moment of announcement adrenaline would rise to its highest in his lifetime." Chin Wa continued, "Before going on stage to present the award, he grabbed me to go over the script three times. Right before going on the stage we went over it one more time in the dark. Normally on the set when I wanted to rehearse one or two more times he would say no need. This time the script was less than 20 seconds and we went over it four times. At the first time we went over it, he even sent a video to Pang Ho Cheung to ask if it worked. You could see how nervous he was."

Chin Wa wished that Lok Jai would be nominated again next year with LOVE OFF THE CUFF. "He is in no hurry, he doesn't need to do a lifetime of stuff in one night. (Next year you can be nominated with Lok Jai?) The chance is very slim for the same character to be nominated twice. I would like to give it a try."

At the night of the awards, Chin Wa happened to sit next to groom to be Aaron Kwok Fu Sing. Did they talk? Chin Wa said, "The atmosphere was very quiet, very solemn and nervous. Talking would echo, so I didn't get a chance to ask him about his wedding. However when we heard Wai Ying Hung's speech we couldn't help but get teary eyed. Sing Sing stared at me and said 'Actors have lives too'."
Posted by hktopten at 8:05 PM