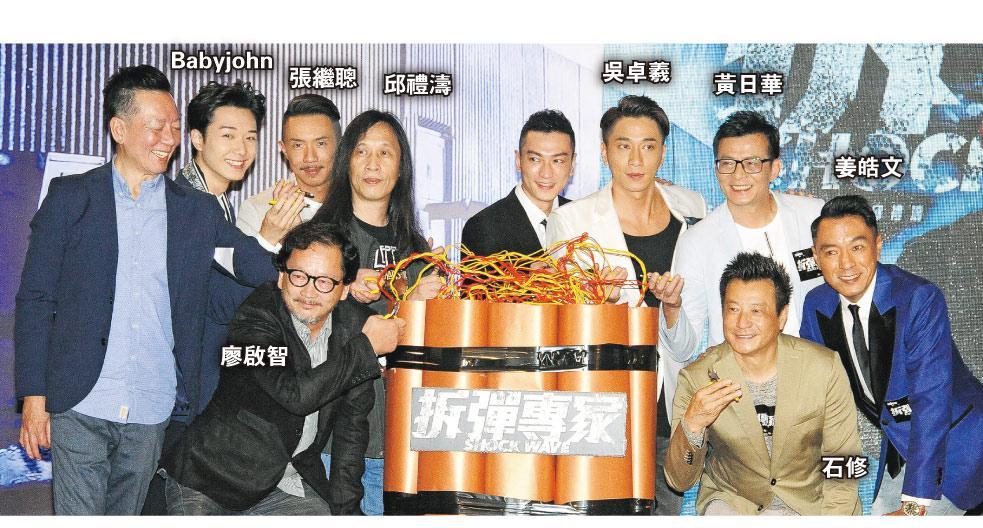 The film SHOCK WAVE (CHAK DAN JUEN GA) two nights ago attended the premiere. Director Herman Yau Lai To, actors Ron Ng Cheuk Hei, Felix Wong Yat Wa, Philip Keung Ho Man, Shek Sau, Liu Kai Chi, Louis Cheung Kai Chung and BabyJohn Choi Hong Yik attended. Producer and actor Lau Tak Wa earlier fell from a horse. Although he was able to stand with a cane now, he was still quite awhile off from complete recovery. Thus two nights ago he was unable to make an appearance. Even so, Wa Jai still sent a video to meet with everyone.

After the "bomb disposal" ceremony, Wa Jai appeared in a suit on the screen. He sounded a little hoarse. When he began to speak he got choked up, but later he became more relaxed. When he spoke his upper body movement range was rather large and felt very free. Wa Jai said, "Thank you everyone for coordinating, the danger has been eliminated. Thank you to the media, colleagues and friends. I have thought about how to promote for a long time, but it's not like you can promote when you want to. Heaven has to permit it. This time Heaven wants me to rest for awhile, I hope to see everyone again fully rested!" He also thanked the cast and the crew. "The film has a line, 'Protect life with life'. In the future the team will protect life with life for me, as they promote around the world for me! I am also telling the director, I will run and jump around very soon, conversations and laughter will appear again. Thank you everyone for your support, I won't hold up your time from enjoying SHOCK WAVE!"

Ng Cheuk Hei was very happy for his idol Wa Jai that he is able to stand up with a cane. He felt that Wa Jai has already only given good news online. As a fan he actually would have heartaches for him and hope that he would recover as soon as possible, so they would be able to work together again. Philip Keung Ho Man felt very touched to see Wa Jai standing up again. He knew that earlier he had a hard time even with getting himself upright. He was happy for him now that he was spirited. Hak Jai said, "He still looks great, he indeed is Wa God!"

Ron two nights ago came to the premiere with his family but no female companion. He said that hopefully he would be able to bring a girlfriend for his next film. He said that in recent years he has become an otaku, only focusing on work and not going out. Naturally he was unable to meet a girl. All the members of the opposite sex he knew were married. His friends have introduced girls to him, but they both had to work and had no chance to meet yet. Ron admitted, "I want to start as friends. Actually I want to date because I have been dry for a long time. However I have to work all the time and have little time to meet women. My circle is small. I have met all of TVB's." TVB had a lot of new blood. Ron said that he was no longer an employee and might not be able to go to TVB. He revealed that next month he will work on the Shaw web drama with Michael Miu Kiu wai, Michael Wong Man Tak and Bosco Wong Chung Chak. All three were in great shape so he could not disappoint. He has already trained to early signs of a six pack of abdominal muscles.

Keung Ho Man came with his wife. He was not disappointed about not winning the Hong Kong Film Award earlier. Instead he was happy for Eric Tsang Chi Wai. "This time I met the Hong Kong Film Award Beauty, I plan to date for several years before taking it home." Speaking of Chi Wai's speech, Hak Jai said that he has known Chi Wai for many years. He knew that he has always been emotional with his words so he did not mind at all. He even hoped that he would be able to work with Chi Wai on 1 VS. 26.
Posted by hktopten at 2:50 PM