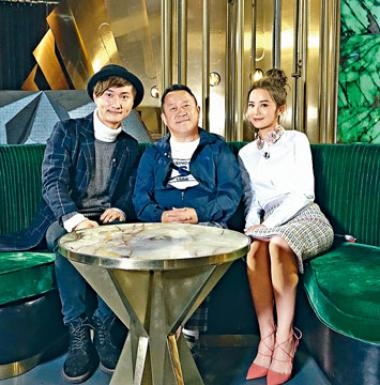 Pakho Chau revealed that in one scene he had to buried in cement, but he has always had claustrophobia he experienced 13 super fearful hours of his life. Director Tsang Kwok Cheung joked that when he knew Pakho had this condition, it was like saying it was great to him. Before the shoot a three to four meter hole was dug, a wooden box was added. Then he asked Pakho to be wrapped in plastic wrap and lay in the wooden box for it to be filled with cement. When it was near his head, his face truly turned pale. Thus he stopped the cameras and immediately pulled him out. Pakho laughed, "This scene took 11 hours, I tried not to leave to rest. When the cement from the lower body gradually reached my head, I really felt like I was buried alive for about half a hour. Yet at the time I still didn't know how to be scared. When we went from Macau to Hong Kong to continue work and wash off on the streets, perhaps the water woke him he finally was able to release. My body was still shaking, I was bawling. The director and the crew came to hug me. I cried for several minutes, but it was still life experience!" Has he overcome his fear after this? Pakho said that he discussed this with his mother, who also had this condition. He believed that he still has not overcome it, but he would keep challenging himself fearlessly. He said that lately in another film he shot another trap scene, which also left his heart pounding.

The film's producer was Eric Tsang Chi Wai, Kwok Cheung already worked with his father on his first film. If he had to direct his father again, he really wanted his father to play a mean father. Unfortunately someone else already did it and arranged for his father and Shawn Yue Man Lok to have a father and son relationship. Kwok Cheung joked, "I saw the film. He did very well, very realistic!" Chan Wing Yan said that she had this film over two years ago. In her first film she already played a ghost. Her roles after that also were supernatural related.

Chi Wai asked five new directors to direct five short films that consisted of the film GOOD TAKE. Why did he have such an idea? He admitted, "Over a decade ago I already wanted to work with new Hong Kong directors. Mainly I saw how Hong Kong film was about to have a generation gap. When all the Hong Kong people kept going north to make movies, I chose to stay in Hong Kong to give them opportunities to shine. Often they wanted to make stories that were very simple and very outdated because they had no money. So I found five new directors in one breath and created a platform for their work to appear on the big screen."

Ah Sa was asked if she had any memory from working with David Lo. "I didn't spend a lot of time with him, but I remember that he was very easy going. He was joking around all the time. His laughter was the most memorable." Chi Wai said, "David Lo was full of positive energy, he always had a smile on his face. Even when he was ill he would not worried. He was a huge encouragement for film's later generations." Ah Sa also pointed out that she had interested in working behind the scenes. "I thought about it, but I felt that the timing hasn't come yet. I don't want to make the boss lose money! However now I am actively participating in behind the scene production. I am interested in working behind the scenes." She also said that she wanted to ask WE ARE GHOSTS (HAK GWAI)'s director Wong Ching Po many times and schemed to see if she could make a new story. Unfortunately he turned her down. "Because Wong Ching Po is too busy, he is very famous now. He doesn't have time for me!"
Posted by hktopten at 2:24 PM