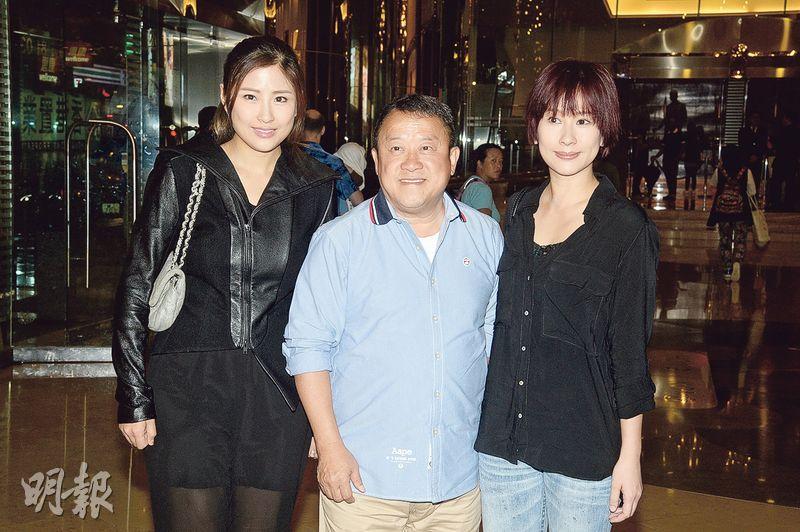 Charlene Choi Cheuk Yin two nights ago attended the film GOOD TAKE! premiere. Speaking of her dating rumor with restaurateur Chiang Hiu Fan, she helplessly laughed, "I already responded, we aren't. We have known each other for a long time. I am single. Please stop asking me about my love life endlessly. If you have anyone in mind just directly introduce them to me, writing about me is useless. I have met new friends, but for now I haven't had any room for development."

Was she already ready for the next romance? She said that she did not know because she still has not run into anyone suitable. As for rumors with Cheng Chi Bong, she appeared upset. "A lot of information is false. Cheng Chi Bong and I were classmates. We have known each other since Form 3, for over 20 years." Did he often appear at her home? Ah Sa answered, "No, I completely don't know but I would talk about a romance when I have one!" When would she publicize it after having a romance? She said, "I would when I get married! I have go legit for a long time. I already changed five years ago, but you are still judging me?"

The film GOOD TAKE! two nights ago held its premiere. Producer Eric Tsang Chi Wai, actor Derek Tsang Kwok Cheung with his girlfriend Venus Wong Man Yik, Michael Miu Kiu Wai and wife Jamie Chik Mei Chun, Charlene Choi Cheuk Yin, Eddie Cheung Siu Fai and Cherrie Ying Choi Yi attended. Chi Wai said that this time he had to help with looking for actors and had a tougher time. During the shoot he gave the directors free rein, the result of which the directors had to bear as well. However everyone was very obedient and did not go over budget. As for the segment his son Tsang Kwok Cheung directed, CEMENT (SHUI NAI), Chi Wai said that it was OK. He knew that many people liked it and it let him make the horror film that he wanted to make the most. However he never thought about pushing his son to work behind the scene because he already had many friends' help. Peter Chan Ho Sun will also produce for him.

Today is Chi Wai's 63rd birthday. He said that celebrations already began at the start of his birth week. He has been drunk for the past few nights, but he said that this year he would not make a big deal. Two nights ago after the premiere the team held an after party for him. Last night he had a vegetarian banquet. Today he would celebrate with a group of friends. Later he will fly to Shanghai, Dalian and Qingdao for internet series and films and will work with a Korean team. Will they be used against TVB? Chi Wai joked, "Television will be behind the times soon, everyone bond a little!"

After enjoying the film GOOD TAKE! the actors went to celebrate in Lan Kwai Fong. Due to the large media coverage, many tourists and party people looked on to stargaze. Birthday boy Tsang Chi Wai even waved to the crowd. Tsang Kwok Cheung and girlfriend Wong Man Yik arrived hand in hand. He said that because it was not his father's actual birthday he did not bring any gift. Wong Man Yik also said that she had to think about what gift to buy. Kwok Cheung immediately said that they would get one together later.

Tsang Chi Wai, Miu Kiu Wai and his wife, Cecilia Yip Tung, Bak Leung Gum and his son, Donna Chu Kit Yi, Michael Wong Man Tak, Janet Chow Ka Wai, Annie Man Chung Han, Cheung Kwok Keung and Lau Shek Yin last night attended a temple restoration charity banquet. Chi Wai revealed that this was already the third year he raised fund for the Nanjing Dingshan Temple. The goal every year has been HK$ 5 million. He has raised money for other temples for over a decade and they would take place the day before his birthday. His friends from the art and Buddhist world would come. He would wait for his friends to bid on their favorites and hold on to the rest of the items. Would he celebrate more last night? He said, "No, I had to be vegetarian at the mouth and in the heart. I have to take a break because I have been drunk for seven full days. Last night I was still fine enough to get into the vehicle, but when I got home I slept in the garage!" As for his actual birthday, Chi Wai revealed that he will celebrate with his golfing friends. Tomorrow he will return to work in the Mainland. His birthday wish was for his friends to have good health! Chow Ka Wai and Man Chung Han were already mothers, so they said that they would not participate in Chi Wai's birthday party as they tended to be too extreme. Since they had children they could only have Happy Friday.

Cherrie Ying Choi Yi and Yumiko Cheng Hei Yi in their new film GOOD TAKE! performed in the same segment. Ying Choi Yi said that last time she planned to work with Yumiko on a movie but she was pregnant at the time. She stated that when she would produce a new film again she would work with her, and even suggested for Yumiko to sign with her as a child star. Yumiko immediately said, "My daughter has no time." Would Ying Choi Yi let her son become a child star? She said, "My son won't have time, forever. I want him to be the studious type because my family doesn't have one. Having one would be pretty good."

Would they consider a match for their next generation? Ying Choi Yi said, "They aren't good friends. My son doesn't like her son because she is always taking my son's stuff. Anyway her daughter is very popular."
Posted by hktopten at 10:53 PM