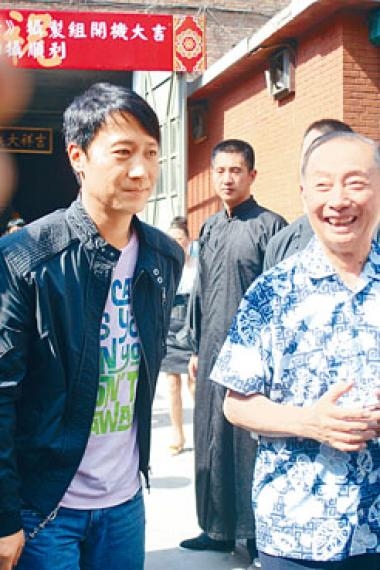 Beijing Opera master Mei Baojiu yesterday passed away at age 82 in Beijing. Afflicted with asthma, during lunch at the end of March he suffered sudden bronchospasm that cut off oxygen to his brain. He remained in a coma and never gained consciousness. Yesterday he peacefully passed away around 11AM at age 82. A memorial will be held on May 3rd in Beijing.

Born in 1934 in Shanghai, Mei Baojiu was the leader of the Beijing Opera Mei School Artand the chief of the Mei Lanfeng Beijing Opera troupe. His representative work included FAREWELL MY CONCUBINE, THE DRUNKEN CONCUBINE and MU GUIYING TAKES COMMAND. Mei Baojiu at age 10 began to study the art. At age 13 he made his debut. With his sweet voice he resembled his father Mei Lanfeng from his appearance to his voice. Mei Lanfeng often gave him artistic advice. Mei Baojiu also was very highly trained in martial art diva roles and Kun Opera.

Wong Cho Lam earlier brought his wife Leanne Li Yanan to support Mei Baojiu's Hong Kong performance. Yesterday he revealed that he made a connection as early as 2000. He said, "At the time I was still studying at the Performing Art Academy, I went alone to Beijing to study Beijing Opera. When I visited my idol Master Mei Lanfeng's home, I ran into Mr. Mei Baojiu who was working on a special about his father. I asked for a photo like a fan, he agreed without any arrogance at all!" Cho Lam even said that he saw the veteran enjoying a fish filet sandwich, which looked very interesting and very memorable. At the time Mei Boajiu was surprised that a young man would head north to study the Beijing Opera and encouraged him to study well.

Mainland director Chen Kaige directed the film FOREVER ENTHRALLED (MEI LANFENG) in 2007 about the life of Mei Lanfeng. Leon Lai Ming who grew up in Beijing played the middle aged Mei Lanfeng. At the time Mei Baojiu even took the time to rehearse with Lai Ming. Later he praised Lai Ming as a very generous, righteous and very nice guy. He could tell he was playing Mei Lanfeng humbly, which was very similar to his father. He admitted that in the film Lai Ming was completely in character. Mr. Mei also said, "He had the traditional flavor of growing up in Beijing, I am very pleased with him." Lai Ming remembered Mei Baojiu as "Lord Jiu" online, saying that the Mei family art will always remain in his heart!

One of the film's investors Albert Yeung Sau Sing yesterday expressed regret about his passing. He revealed that the last time he saw him was at a Mainland award presentation. At the time Mei Baojiu asked him to dinner in Beijing, but he never had the time. He even said that back then Mei Baojiu contributed a lot to the film and was a great person.

As the "Mei School" successor Mei Baojiu inherited his father Mei Lanfeng's career as China's Beijing Opera master of a generation and the best among the "Four Great Divas". Born in 1894 in Beijing, he started studying opera at age 8 and began to perform at age 10. As a man he specialized in diva roles -- female roles in operas. The Beijing Opera at the end of the Qing Dynasty focused on form and not emotional performance. Lan Meifeng injected emotions into Beijing Opera. His emotional performance developed into the unique "Mei school". His representative work included FAREWELL MY CONCUBINE, MU GUIYING TAKES COMMAND and THE DRUNKEN CONCUBINE. FAREWELL MY CONCUBINE was adapted into Cantonese opera and films, including the late superstar Leslie Cheung Kwok Wing starred film of the same title.

Mei Lanfeng even actively spread Chinese opera culture overseas, visiting Japan, the Soviet Union and the United States. In 1961 he passed away in Beijing at age 66.
Posted by hktopten at 2:19 PM