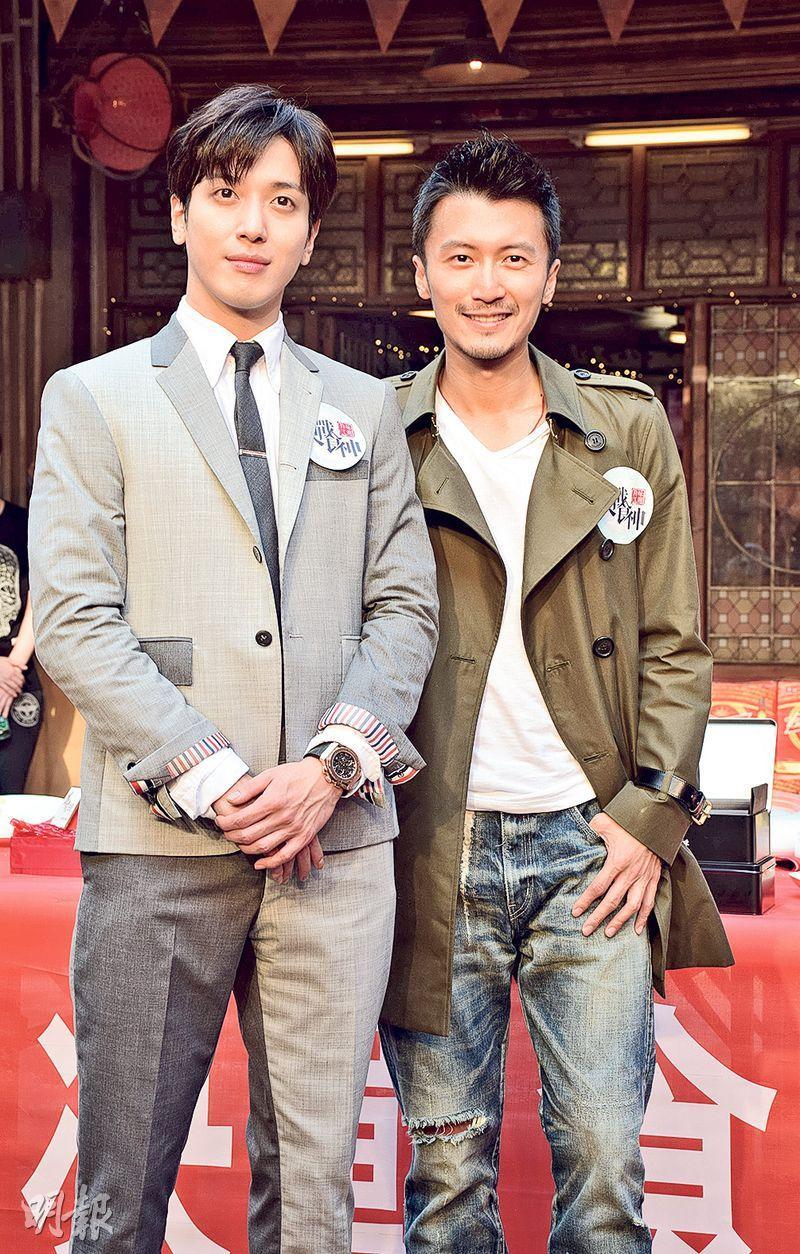 Before the ceremony, a shower suddenly passed by. When it officially began it cleared up. Yeung Sau Sing led the team in presenting incense sticks, but Jung Yong-Hwa did not really know how to place it. Ting Fung and the director had to lend a hand. He too was no match for the heat as he kept wiping his sweat and fixing his make up; Ge You also often removed his hat and wiped his head. Ge You worked on his first cuisine film and revealed that he would eat everything. Spicy food was his favorite. The host and actor Du Haitao revealed that Ting Fung was also the cuisine consultant, all the food on and off screen had to have his approval. Ting Fung also revealed that he wanted to explore street stall dishes, which was a huge challenge. Playing the head chiefs in the film, Ting Fung and Yong-Hwa tried fish maw dishes. Yong-Hwa said in Putonghua and Cantonese, "very delicious" and "very sharp". Ting Fung immediately revealed that when he had dinner with Yong-Hwa earlier Yong-Hwa often said "good good good". Later they presented "roast pig cake" to on screen "flavor king" Ge You to become his disciples. Ge You immediately had a taste and said it was top notch.

Ting Fung said that he suggested the "roast pig cake" but he did not make it personally. He left it in the hands of bakers. As the food consultant, he pointed out that he explored all the dishes in the film. He stated, "Everyone became my lab rats." Would he still be chok when he played a street stall chef? He said, "I don't know, you will know when you watch the movie. (Street stall chefs don't like to cook with clothes on) I wouldn't, the most important was hygiene." Michelle Wai Si Nga revealed that when she tried Ting Fung's cooking she would learn in secret , so everyday she would run at the hotel to stay in shape. She also praised Ting Fung's arm strength as he was able to toss the wok with one hand. She would not do it with both hands.

Ting Fung was asked if he has seen his children lately. He smiled and replied, "You know I won't answer." Was he worried that Cecilia Cheung Pak Chi's debt collector would affect his children? He continued to say he would not answer. When asked if he has heard Dou Ching Tung's new record, Ting Fung at first said that he would not answer but later said that he did. Was she better than him? He joked, "How hard would it be to be better than me?" Finally he was asked about wedding news with Faye Wong. He said with certainty, "No, this one I have to answer. (Have you thought about getting married?) I won't answer."

Yong-Hwa said that he could not cook. Because in the film he played a famous three star chef he had to put a lot of effort into learning the technique. He revealed that he did not know how to use a knife before and would use a pair of scissors instead. Now he practiced with the knife more and curry was his best dish. Has he tried Ting Fung's cooking? He stated, "Not yet, last time when we met the timing wasn't right." He said that he liked to eat anything and everything, he would eat whatever Ting Fung would cook but he would like to try sweet and sour pork the most.

Aside from Foshan, the film will shoot on location in Macau in June. Next month the film will have open auctions for fans to work with their idols.

Jung Yong-Hwa was asked he was used to the Mainland climate. He asked Bai Bing in Putonghua, "Hot?" Bai Bing nodded and he said in Putonghua, "The heat is killing Baby!" He praised Bai Bing for really taking care of him. Each time he was working she would teach him Mandarin. Bai Bing also praised Yong-Hwa as smart, he already learned something individual words after hearing it once. She also said that Yong-Hwa was already her student. This time would be Yong-Hwa's first film, when asked if it was any different from working on a series in Korea he said that at first he was very worried. After arriving he realized that it was exactly the same as a Korean production. The most special was that the Mainland sets were already built and he was able to focus more. They played a couple in the film. Bai Bing revealed that because of Yong-Hwa's fans she felt the pressure. They would have a kiss scene but it has not been shot yet. Was Yong-Hwa looking forward to the kiss scene? He joked, "I am faithful to the character."
Posted by hktopten at 2:23 PM