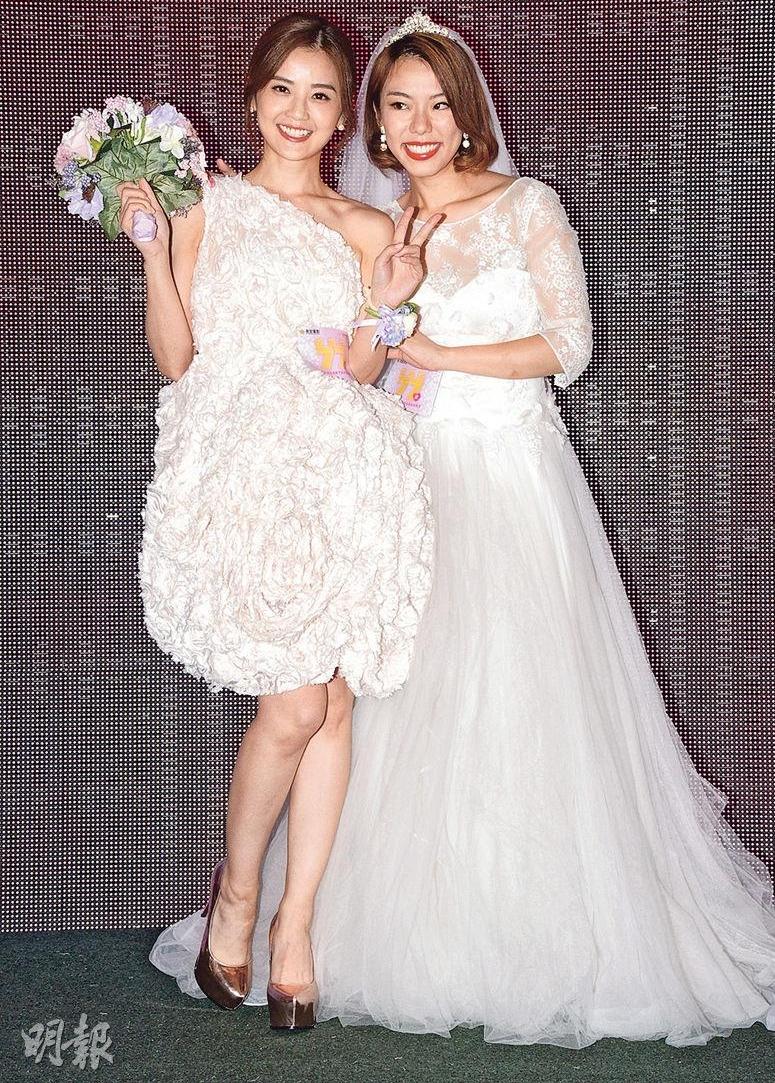 Ah Gil shot the process on her phone in the audience. She even said, "I won't catch the bouquet again, even though it's fake." Later Ah Sa and Ah Gil were interviewed together. When reporters congratulated Ah Sa on catching the bouquet, she said, "It's a mirage, obviously I didn't catch it." Ah Gil joked that her mirage was very real. Would Ah Sa accept Yumiko's good intention? She said, "Two out of the four people fighting for the bouquet are married, only me and Wai Sze Nga aren't. (Everyone really want you to date?) Great, thank you everyone."

Ah Gil said that she has caught the bouquet twice, to avoid never being able to marry she would not catch it again. "I heard that if you don't get married half a year after catching it you won't be able to for three years. I caught it twice, the time has almost passed. I can't catch it again." Ah Sa said, "Mine was fake, I suspect Yumiko set me up."

Ah Gil earlier at an event welcomed any suitor of the opposite sex publicly, but so far no one has taken any action. She joked, "Are you kidding, do you think it's easy to come up with a subject? All the newspaper advertising is very expensive, don't let it go to waste!" When asked if she would ask Ah Sa to introduce guys? Ah Sa said that she could not even take care of herself, just let it be. Was Ah Gil in a hurry to date? Ah Gil denied that. "The boss earlier asked me if I had any suitor. I answered no. (The boss has a son Gilbert Yeung Ching Lung?) He is very young and so busy. The boss told me not to, he said that I would be heartbroken." Ah Sa also asked everyone not to worry about her and Ah Gil's romance. "Mr. Right is on the way. (Is he taking the tram?) The tram is still a vehicle, the tram still has a terminal station. You can even catch Pokemon." Ah Gil also said that if she found the right guy she would not marry a flash wedding, but she would need to get to know each other enough first. Would she need to observe for many years? She said, "A little over a year would be enough, so what if you are all planned out? He's not getting married."

Ah Sa this time would not only perform but also took part in creating the story. She also asked many friends to perform, including her kindergarten classmate. Ah Gil was asked about her salary. She said that she only took lai see, as money would hurt their relationship. Playing a bookstore owner in the film she looked rather rock. She even had to ride a motorcycle.

Yumiko was asked if she stuffed the bouquet to Ah Sa because she wanted her to date soon? She said, "I want people around me to be happy. What was I going to do with it? People would only yell at me." Has she introduced guys to Ah Sa? Yumiko revealed that Ah Sa had many suitors. "I have a lot of good guys to introduce to her, Ah Sa has many suitors since she is so pretty." Did she know any detail? She immediately clammed up. Has she seen Ah Sa's suitors? She continued to avoid the subject. "No I haven't, I won't say anything else."

Has she missed her daughter at work? She said, "Today I wrapped up production. Ah Sa really wants to see her, I will see if I have any way to bring her to visit the set." She also revealed that when her daughter saw her going to work, she not only did not cry but also looked very happy. Her daughter will turn 1 and a half soon. Yumiko revealed that she has personally taught her to swim and dance. Earlier when her film was shown again on television, he daughter recognized her, pointed at the television and yelled Mama.

Pakho Chau yesterday revealed that in the film he and girlfriend of many years Choi Cheuk Yin have already reached the stage of discussing marriage. Later they broke up over something minor and he even had relations with Wai Sze Nga.

Speaking of his real life girlfriend, Pakho said that he was not capable yet. "Now I am the head of the household, if I get married I would be the head of two households. At least I would have to make double the money I am making. I have liked to take care of people since I was little, I feel like I was the savior, superman. From childhood I have had that sense of duty, like it was very cool. People around me don't have to be bothered then." He admitted that he would like his wife not to have to work after marriage and focus on family just like his father.

Pakho also said that his character was not attentive enough, not grown up enough, irresponsible, immature, selfish, rebellious, he might as well be playing himself. He admitted that he was immature. "My mind is still at age 15 or 16, my personality can't grow up. I really like to play, I want to try everything. I don't care if I get hurt. I want to perform the dangerous stunts myself, my personality is adventurous. (But you are faithful to your girlfriend?) Being faithful is mature? I behave immaturely." What was the most immature thing that he has ever done? He said that most immature was playing pranks on others and insulting others. "Now I would think before I speak, I used to just talk. (Did you insult people in the business?) I don't know, maybe people still remember and I don't know about it. If I did please forgive me."
Posted by hktopten at 5:08 PM