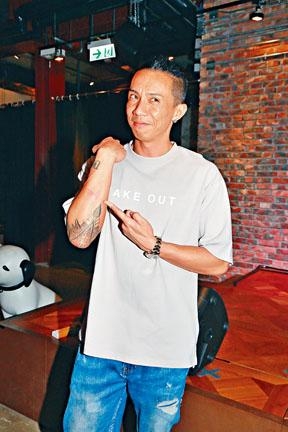 Cheung Kai Chung has been busy with another new film. Two nights ago he came during his break. Speaking of the scar on his arm, Ah Chung pointed out that he just finished a gang fight scene. Since he was so busy with film, would he not have time to be with his pregnant wife Kay Tse On Kay? He said that when he was not at work he was with his wife. He also revealed that his wife could not eat in the first three months because the baby was on her stomach. Now her condition has improved. Sometimes she would want cart noodle and he would drive from the New Territories to Hong Kong Island through two tunnels to get it. It was like a date for them and they were very happy. Becoming a father again after almost ten years, he thought that he would not be as touched second time around. Yet each time he saw his baby girl gradually growing on ultrasonic he was very touched.

Has his son accepted becoming a brother soon? Ah Chung also said that earlier the family went to see a Chinese medicine practitioner, who said that his son had liver depression. Was he keeping his feeling inside? Ah Chung said, "My son has been sitting on the Heavenly King throne at home for ten years. Maybe he feels it's time to renounce the throne. So I am always instructing and talking to him. I believe when his sister is born he will be fine."
Posted by hktopten at 2:48 AM