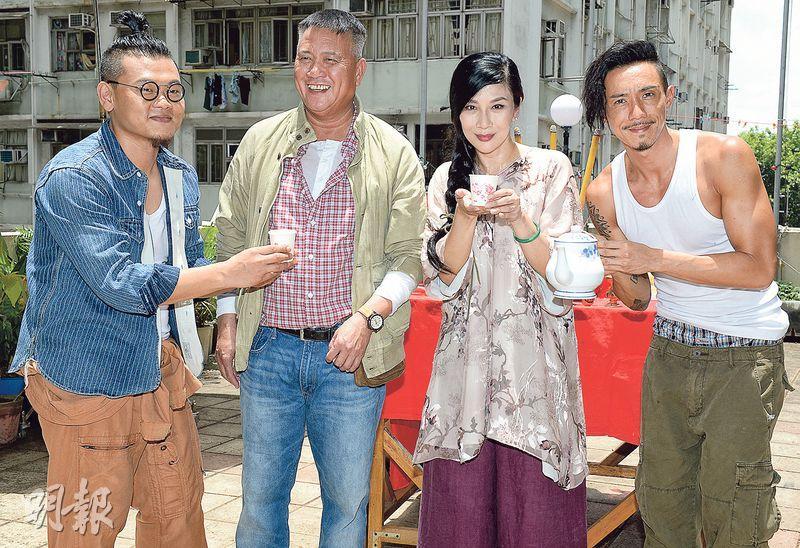 Alex Man Chi Leung, Carrie Ng Ka Lai, Louis Cheung Kai Chung, Michael Ning (Bak Ji), Cherry Ngan Cheuk Ling, Venus Wong Man Yik, and others yesterday attended their film Z FOR ZOMBIE (GUM MAN DA GEUNG SI) production start worship ceremony. After 4 years away from film, Man Chi hoped to make more good movies for the audience to remember him by before retiring at age 60 next year. Troubled by diabetes, he said without any fear of taboo, "I won't die so soon". Meanwhile Bak Ji resisted playing a couple with girlfriend Ngan Cheuk Ling, but she instead said that she would not mind.

After the ceremony, Man Ji asked his on screen son Bak Ji, "Would I get any daughter in law tea?" Later Bak Ji and Cheung Kai Chung presented tea to elders Man Ji and Ng Ka Lai. Man Ji already prepared lai see for Bak Ji, then gave away HK$ 100 lai see all around.

Man Ji revealed that he has not made a film in 4 years. This time he caught the eyes of the director and the producer and he really liked the character in the film. The zombie fight is like everyone uniting to defeat the negative energy in the society, which was very thoughtful. He would even sing Cantonese Opera with Ng Ka Lai, with whom he has not worked with in over a decade. On his first day of work, the young people were all very nice and worked seriously. That was priceless.

Man Ji revealed that in recent years diabetes has troubled him. Last year he has been on a Chinese medicine regiment and exercise for half a year and his condition has already eased. However he could not be proud. "The biggest problem is that I am a 'rick bucket', but the more rice I have the higher my diabetes index climb. I could only stop. I have to be healthy and moving to be able to make good movies. I am 59 this year, I plan to retire next year at 60. Before retiring I hope to make more good movies for myself and the audience to remember me by. (will you return to TVB for a series?) For now I don't have this order, I am interested. The most important is to have health, anything then can coordinate. (Is your diabetes serious?) I am grateful that I won't die so soon, I definitely won't die so soon. I would try to make more performances that I can answer to the audience for."

Ngan Cheuk Ling and boyfriend Bak Ji would not play a couple in the film, but would be paired with Cheung Kai Chung. However they would not have any scene that would be too intimate, only hand touching. Bak Ji would not mind his girlfriend having intimate scenes with other actors. "We are all professional actors, but I would according to the character requirement keep a close eye on my girlfriend to help Cheung Kai Chung get her. (Would you remind Ah Chung to watch himself with your girlfriend?) I wouldn't do that, we are all professionals."

Would Ngan Cheuk Ling normally sharing acting ideas with her boyfriend? She said, "We are very artistic, we would talk about acting. Our interests are similar, privately we would always talk about characters. We are very dull." Bak Ji said, "We aren't really very dull, just a little dull." When would the shoot end? Bak Ji sensitively widened his eyes with a look of surprise, actually he misunderstood that he was being asked when they would be done dating and break up. He laughed and said, "I misunderstood what you meant, haha." Would they play a couple in the future? Ngan Cheuk Ling said, "He said 'no,', I can." Bak Ji said, "I am really bad, I am afraid of being embarrassed." Ngan Cheuk Ling continued, "He said that he would be afraid of being distracted when we would work together, but this time we have been very focused. As long as we are working with good co-stars we are fine. He now says no, in the end maybe he will be able to." Bak Ji said that he would consider when the opportunities would arise. Speaking of playing a couple would raise their price tags, Ngan Cheuk Ling said, "That's got nothing to do with it. I only feel that the meaning is even more important, but I won't resist working together as a couple."
Posted by hktopten at 3:17 PM