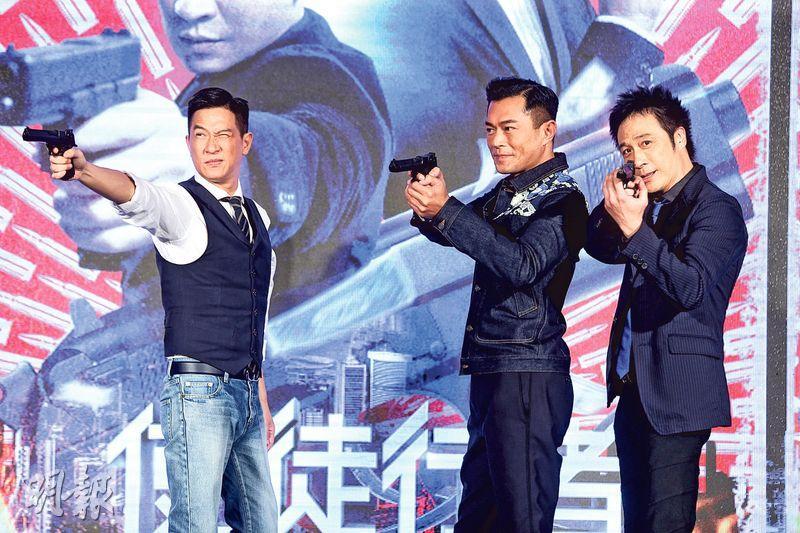 In the film, Cheung Ka Fai and Koo Tin Lok played a drug smuggling ring's key member Ah Lam and Siu Yeh. They fell into an "Infernal" identity mystery situation, as brothers who went through life and death together fell into the most difficult and also the bloodiest choice. On the road of investigating undercover, Q Sir Ng Chun Yu also fell into hardship with the case as BlackJack gave him headaches galore; in addition, "Sister Ting" Sheh Si Man would show off her skills and performed a beauty rescuing a hero scene when she saved Koo Tin Lok. The host asked Goo Jai if Ka Fai and Chun Yu fell into the water, who would he save? Goo Jai said, "I would jump into the water myself."

In the film, the "charming triangle" trio of gods Cheung Ka Fai, Koo Tin Lok and Ng Chun Yu battles brains and brawn. In the film, Ka Fai and Koo Tin Lok were outstanding members of the group and trusted subordinate of boss Kwok Ming. They have been looking out for each other since the start. The Ng Chun Yu played Q Sir had to rely on undercover agents to investigate their whereabouts. What happened between them left them with an indescribable quagmire and a complicated relationship. Yesterday the press conference decorated the stage like a bar. Cheung Ka Fai, Koo Tin Lok and Ng Chun Yu talked about the past. Three buddies of many years evaluated each other and even played "Truth or Dare". When asked about what was memorable from the production, Goo Jai said, "The most memorable was going to Chun Yu's home for a chat, and working out with Ka Fai. As soon as he saw me he couldn't stop laughing."

Playing "Sister Ting" in the television series, Sheh Si Man reprised the role this time. With all male co-stars, Sheh Si Man revealed that she has never received any special treatment. She said, "I performed the stunts personally and had bruises all over. To ensure the action result, the director was extremely strict with his demands for me." Yesterday as the only actress present, Sheh Si Man received a special benefit as she evaluated the three actors like a judge. On the day of the press conference, top Mainland singer Hua Chenyu performed the film's Mainland theme song HERE WE ARE. The Hong Kong film theme song will be performed by a heavyweight Hong Kong singer.
Posted by hktopten at 5:09 AM