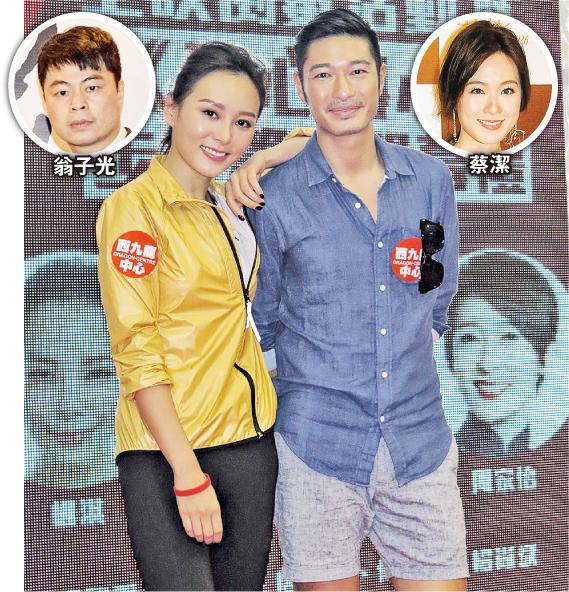 Jeana Ho Pui Yu recently was rumored to have moved in with director Philip Yung Chi Kwong. Yesterday when she attended the film THE MENU (DOH FOR SUN MUN SIN)'s event, she denied that she was dating and said that Yung Chi Kwong was just a little more than friends friend.

When reporters congratulated Jeana, she played dumb. "The film is finally released!" Was she living with Yung Chi Kwong? She said, "Back then many friends were at the place, he is a little more than friends friend, a very talented Oppa. (Would you have any chance to develop it into something more?) If nothing happens then everyone would stomp on me! (Are you afraid that it would end when it sees daylight?) I haven't thought of an answer yet, let's talk more later." Speaking of how she met Yung Chi Kwong, Jeana said that they met when they worked together and they stayed in touch. She also said that she liked mature and stable man. Did Yung meet her needs? Jeana said, "I don't know yet, probably!" Justin Cheung Kin Sing chimed in and asked if Yung Chi Kwong was someone she would marry? Jeana said, "You have to date first before getting married, now it's time to store up ammunition!"

Gregory Wong Chung Hiu was revealed to be flying model planes with actress Jacky Cai Jie. he admitted that he invited her to make a movie as a director. "She didn't have room in her schedule, so we missed out. (Did something good come out of it?) There is a chance. (What is missing?) I don't know, but we talked, we liked movies, we could fly planes together, too bad the plane couldn't take off! (Were you embarrassed?) A little!" He also said that if he was dating he would publicize it.

Catherine Chau Ka Yin had a injury behind her left ear. She said that when she got up she hit a bed side lamp that could not be more broken. "I needed several stitches. The doctor said that the wound was 2 cm long."
Posted by hktopten at 6:20 PM