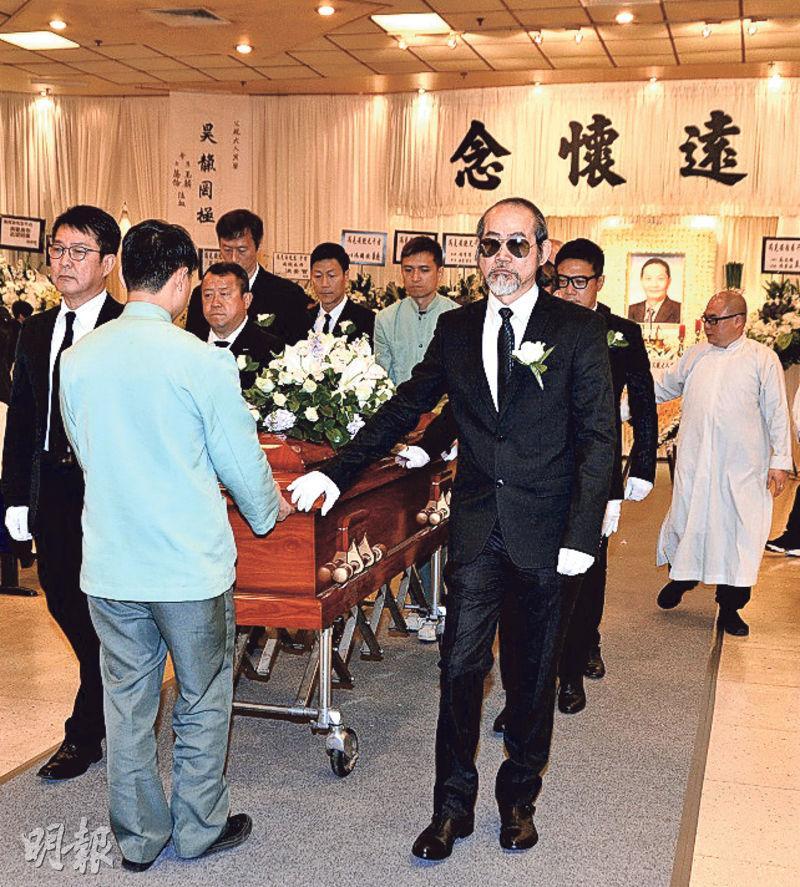 Veteran artist Fung Hark On's funeral took place yesterday. His family members Fung So Bo, Petrina Fung Bo Bo, brother in law Yu Chi Ming and his children all bid Brother Hark farewell. Brother Hark's funeral took place at the Po Fook Hill memorial hall. Yesterday morning Fung Bo Bo, Fung So Bo and Yu Chi Ming had a little smile when they chatted. Later director Andrew Lau Wai Keung, Yuen Qiu and others came to pay their respect. When the ceremony began, Brother Hark's family and friends gave eulogies in a closed door format. After the ceremony the cremation took place at the Fu Shan Cremataorium. The ashes will be placed in Po Fook Hill. After sending Brother Hark on his final journey, his family leaped over a basin of fire then attended a cleansing banquet. Fung So Bo and Fung Bo Bo were saddened and kept silence throughout.

8 friends were the pallbearers, Tsang Chi wai, Tsui Siu Keung, Yuen Biao, Yuen Wah, Meng Hoi, Chin Ka Lok, Lam Kwok Bun and Chow Man Hei spoke to the media. Chi Wai revealed this group of pallbearers have been Brother Hark's friends for several decades. Brother Hark even gave him his start as a stuntman so they had a long history. Chi Wai said that in the past they often worked abroad and constantly ran into the stunt teams of Lau Ka Leung, Sammo Hung Kam Bo and Jackie Chan. Brother Hark was an action film representative figure to him, well liked and loyal he had the love of many action directors. He mentioned that yesterday at the altar he saw Brother Hark's work. Few was able to achieve his kung fu action performance. Chi Wai praised, "Brother Hark was loyal and well liked. At the altar many people wanted to see him one last time. I would always remember drinking with him!" Speaking of a film company's lawsuit against Chi Wai for HK$ 4.5 million in compensation, he said that the matter has entered the judicial process so he could not say more. He had no idea how long the matter will drag on either.

Lam Kwok Bun praised his mentor as easy going. Actually in the 80s he already became a student of Brother Hark. He recalled, "Sifu taught me a lot of action, but I was too useful to learn a lot. I only learned to drink and play drinking games. However Sifu's lessons were very helpless on my journey in life. I made a lot of friends. Sifu was very easy going. (Ken) Low Wai Kwong and I rarely called him Sifu, but today I have to say Sifu Go in Peace!" Tsui Siu Keung came to bid his friend farewell but did not have anything special to say, since they have known each other for most of their lives. He remembers that he often beat him at drinking games. Yuen Wah also praised Brother Hark as a sentimental person.
Posted by hktopten at 7:27 AM