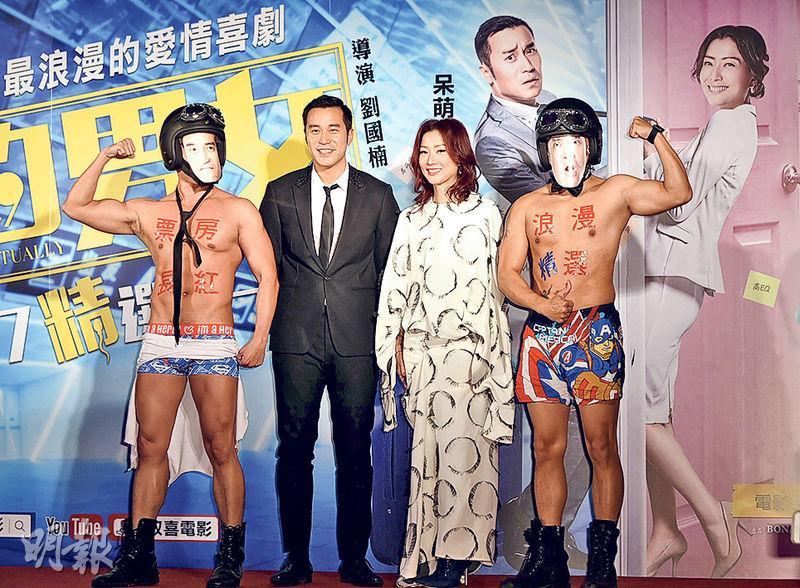 Sammi Cheng Sau Man and Joseph Chang Hsiao-Chuan promoted LOVE CONTRACTUALLY (HUP YEUK NAM NUI) in Taiwan. Two nights ago at the premiere two muscular men with Chang Hsiao-Chuan masks and boxers danced for Sammi. Sammi was asked to choose one and she chose the one with the bigger chest. Sammi also said to Chang Hsiao-Chuan, "You take one off too!" Chang Hsiao-Chuan followed and took off his jacket, which made fans screamed.

In the film Chang Hsiao-Chuan danced for Sammi, which Sammi described as feeling just like his fans. She had a lot of fun and was not shy at all; Chang Hsiao-Chuan only wore boxers and felt embarrassed. He had to have many takes.

Yesterday Sammi and Chang Hsiao-Chuan during the promotion were asked to perform a proposal scene. Chang Hsiao-Chuan got on one knee and presented a super large ring balloon. Sammi cracked up and asked if the ring could be a little smaller. Sammi also shared her romance with her husband Andy Hui Chi On. She loved to cook, her better dishes included the heavily flavored Dongpo pork and Taiwan braised pork rice. Since she could not eat them she forced her husband to. On Jai could only say they were delicious! Sammi revealed that she would be sorrowful and sentimental in real life. When she felt stressed she would become the "human dish washer". Next she would start throwing things but nothing of On Jai's. Sammi recently changed her mind about having children. She said that they have not done anything actual yet. She would also consider freezing her eggs. Otherwise in a few more years she was afraid that she would have missed her chance.
Posted by hktopten at 5:48 PM