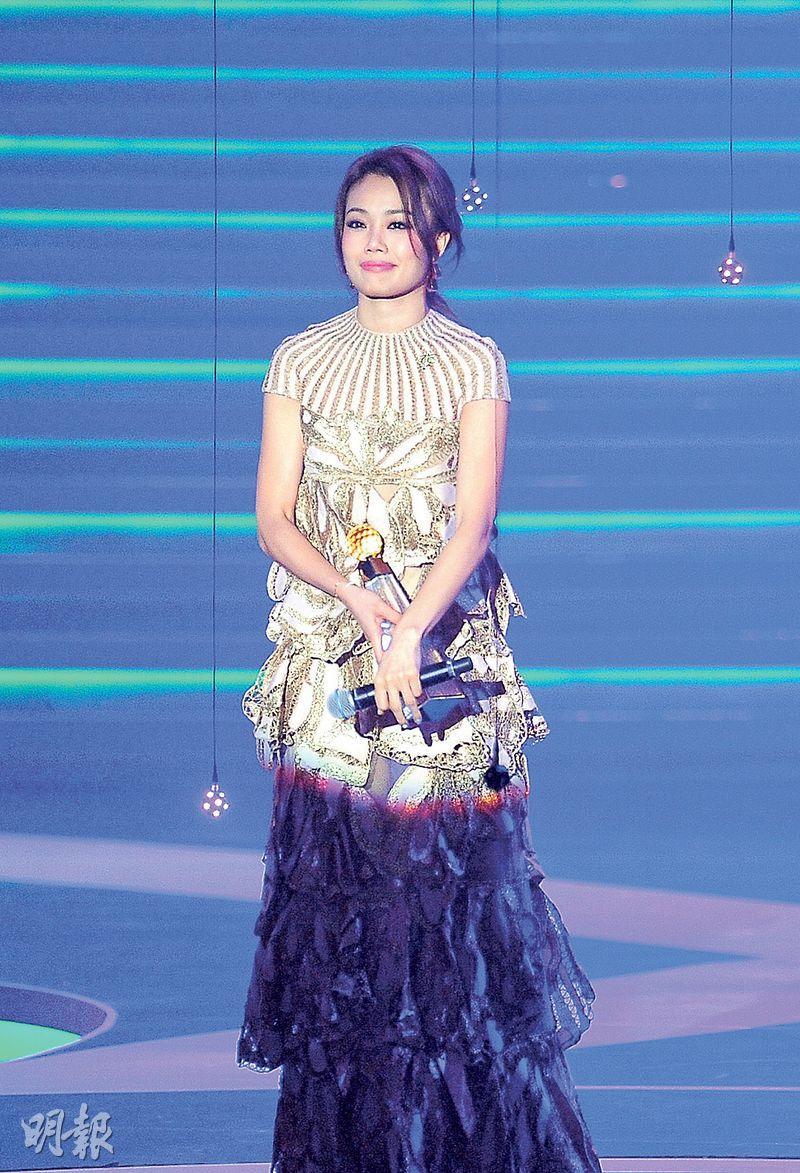 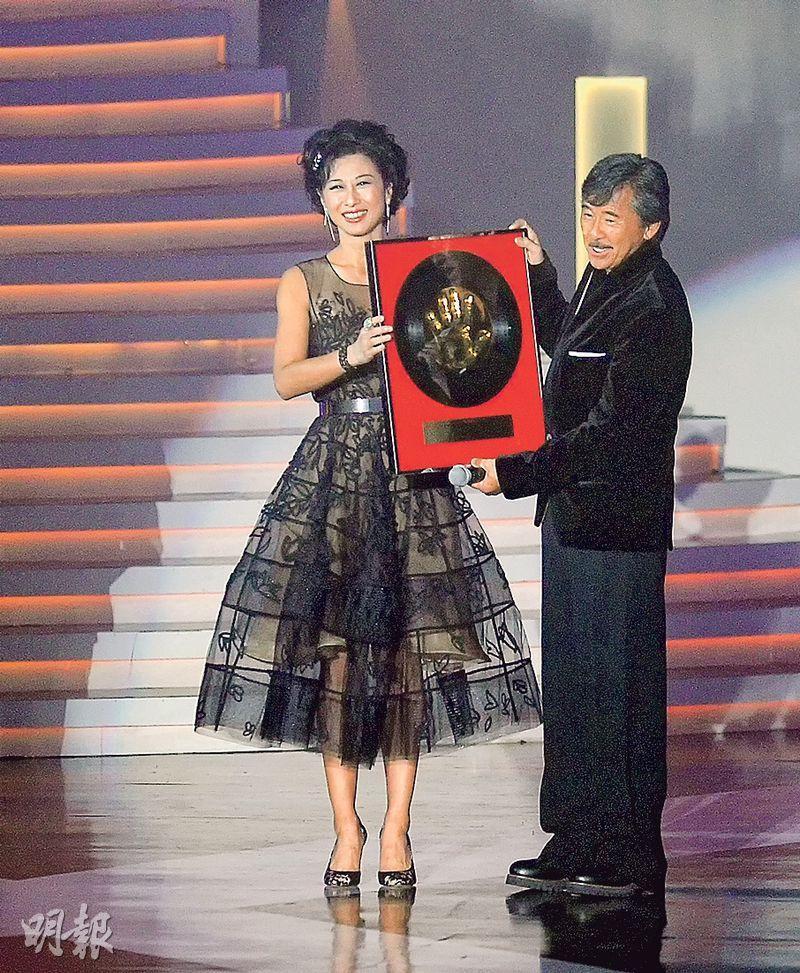 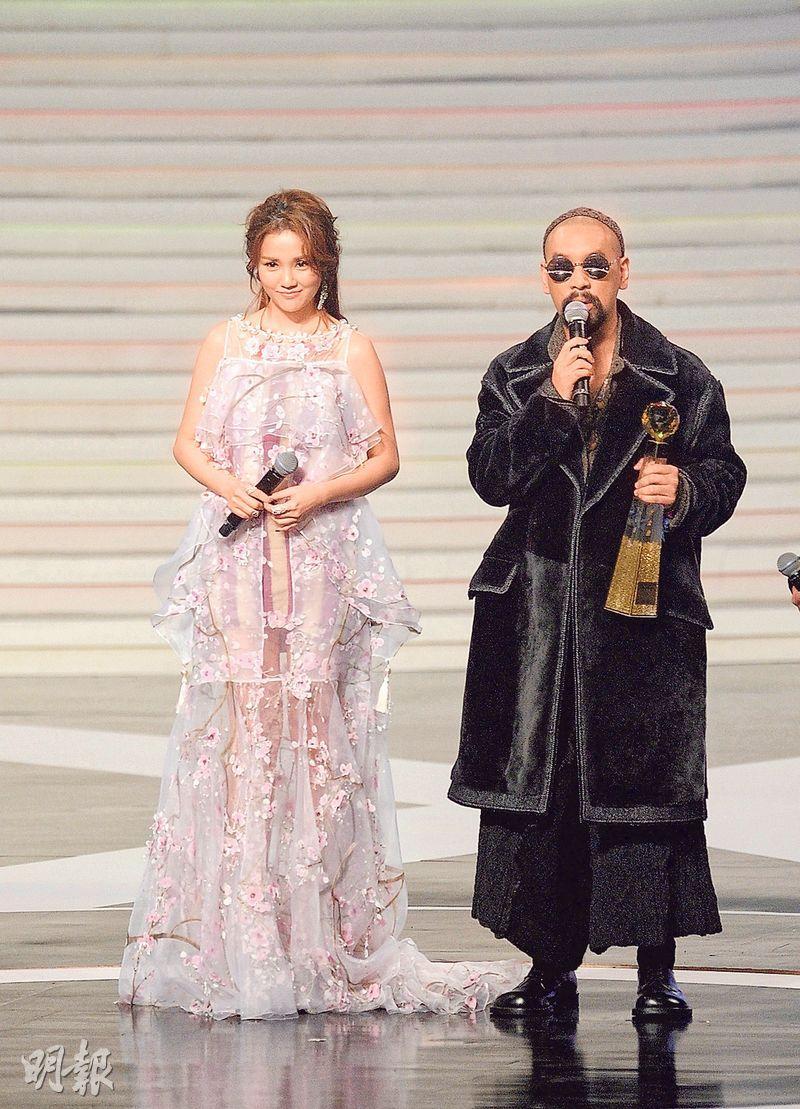 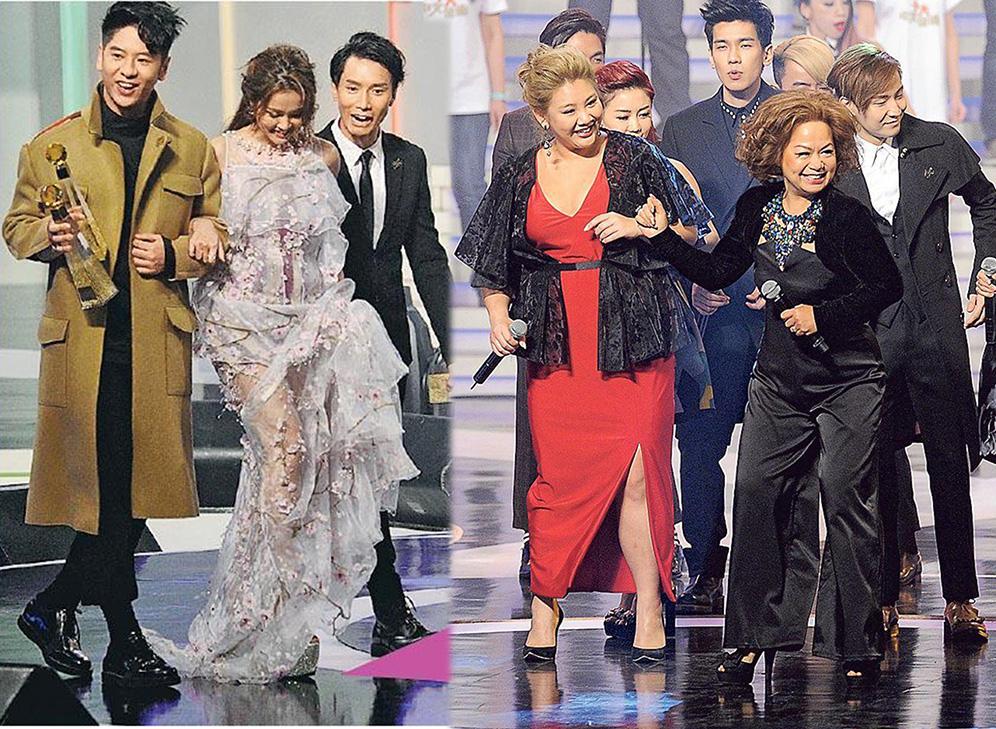 This was Joey's 12th "Most Excellent Female Pop Singer award" and Chan Yik Shun's 11th "Most Excellent Male Pop Singer award". Joey thanked everyone at Emperor. Since she started in music in 1999 they witnessed her growth, her mishaps, improvement and failure, they were no longer as simple as co-workers as they have become good friends. She also said that this family was very warm, very simple, without gossip. Everyone encouraged each other and it was a very safe place to grow up in; she also admitted no matter how many times she has won, she was still nervous every time she went on the stage. After accepting everyone's applause and cheer, she would be just like the singers in the audience and keep working hard in the New Year.

Mainland singer Han Hong with ONE PERSON won the Best National Chinese song award. She revealed that starting yesterday she was under the Capital Artists label and it will be her first Hong Kong record; she also said that from now on she will constantly come to Hong Kong and participate in more Hong Kong community events. The rising star James Ng Yip Kwan after sweeping the Rookie new prize at the TVB, Metro and Commercial Radio awards last night again won the Rookie With The Most Potential" gold prize. He completed the rookie gold prize clean sweep.

When rookie Sukie Chung Shu Kei won Rookie With The Most Potential Excellence Award, Sukie thanked all at once all the record company workers who has helped her. She even stared at her sister Sherman Chung Shu Man in the audience and jokingly thanked her for keeping her fed. "I have her to wash my clothes, socks and underwear, otherwise I wouldn't be on the stage now!" Sherman cracked up in the audience.

Singers of the same label, Phil Lam Yik Hong and Jason Chan Pak Yu both won "Top Ten Gold Songs" with ANDERSEN'S FAULT and TURN AROUND SMILE. When host Lee Chi Kong announced Phil he was moved to tears. Even his female partner made fun of him and she had to help him off the stage. When Phil won he stated that last year his popularity soared with HIGH MOUNTAIN LOW VALLEY, which added to his pressure this year. "I want to tell everyone that I don't have just one song!"

Jason was especially moved after winning an award six years later. He not only promised to work harder but also gave a special thanks to his girlfriend Leanne Fu Hiu Mei.

Pakho Chau won a top ten gold song award with NOT IN A HUNDRED YEARS. Pakho after thanking his record company co-workers and fan said that this time he had to give special thank to his little brother because he complained that he never thanked him in his award speeches. "Thank you for shining all the shoes at home! I have been in the business for 9 years, often I don't have a chance to spend the major holidays with the family. I don't really see them either, thank you to my family!"

Gregory Wong Chung Hiu last night presented the "Most Improved Award of the Year". How could anyone improve even more? He said, "In order to improve first of course you can't take a step back, I have 3 things I want to say, you have to drink more lead water, read more books and eating more peanuts online before the LegCo passes 'internet act 23'." When he announced the bronze prize went to Fred Cheng Chun Won, Cheng Chun Won was drinking water and had a look of disbelief that he won.

DJ hosts Tsang Chi Ho, Kwai Fa Tin and Lee Chi Kong poked fun at James Ng Yip Kwan with foggy glasses and said that they had to promote Cantonese songs as role models. Every month they had to listen to 30 records, get Chan Ching Sum to be the "Cantonese song promotional ambassador" because singers that she has promoted would focus on staying in Hong Kong to sing and would not work in the North. Then they asked Hins Cheung King Hin in the audience if they were right. Hin Jai did not show much emotion. They also said that 2016 god should be Yip Ka Bo because his "guaranteed to take the rap, to go to court, to get fined" complete package was better than Lau Ming Wai's.

Rumored to be "transferred" out of the Radio Hong Kong morning program, DJs Tsang Chi Ho, Wong Kwun Bun and Cuson Law Kai Sun before the ceremony started continued to poke fun at show business events big and small. They started with Wong Ka Keung loves to live in the country because he liked Wong Ka Kui to the point of hugging a "plastic" Ka Kui; then the trio again mentioned the Chief Executive Leung Chun Ying posting the video of him singing LIKE YOU and said that CASH will send the bill to Leung Chun Ying.

Hacken Lee Hak Kun was absent due to his participation in the Mainland singing content I AM A SINGER 4. He became the target of numerous jokes, saying that Hacken should get the "Top Ten Chinese Bar Code", the prize was a new suitcase for him to fill with bar codes again.

When the event announced that Hacken's YOU ARE THE MOST IMPORTANT was the fourth Top Ten gold songs, they joked that he went to look for his luggage and could not attend and that the award will have a bar code.

In addition, after 40 years in the business George Lam Chi Cheung entered the Hall of Fame that debuted last year. His wife Sally Yeh (Yip Sin Man) presented the award to him. Ah Lam first asked his wife if she had anything to say. She shook her head. Ah Lam joked, "At home she talks a lot, here she doesn't." He also asked everyone if they wanted him to sing more or talk more? Everyone said sing more, but Ah Lam said, "After 40 years, I might as well talk more." Then he performed and introduced his first song BILLION NIGHTS, which actually was his son Alex Lam Tak Shun's favorite. He only found out from an interview. Ah Lam also thanked the Lord for giving him the energy to sing "oddball songs" and for people to still listen to them. Finally he wished everyone including his wife good health.

The Golden Needle Award recipient Kenny Bee (Chung Chun To) appeared with his daughter Chung Kwok as they hummed a song together. The singers gave him a standing ovation. Later he performed many of his classic songs, then his friend Alan Tam WIng Lun presented the award to him. Brother B thanked the Wynners for this honor. Because he was the youngest among them, over the years everyone watched over him like big brothers, tolerated his immaturity. However because of his immaturity he was able to get past so many storms.

Alan said that although LET EVERYTHING GO WITH THE WIND sounded great and cool, no one would feel as deeply about the song as he did because the song's feeling and lyrics reminded him of Brother B's different experience. However Brother B's personality was just like his, gone with the wind as nothing fazed them. Alan also said that this song was absolutely the gold among gold songs. Unfortunately back then it did not win any award. Brother B also said that the song was the biggest one that got away.

TOP TEN GOLD SONGS:
RASHOMON (Juno Mak, Kay Tse)
SECRET OF TEARS (Jinny Ng)
UNCONDITIONAL (Eason Chan)
YOU ARE THE MOST IMPORTANT (Hacken Lee)
THIS CLOSE THAT FAR (Joey Yung)
BEYOND LIFE AND DEATH (C AllStar)
THE RIGHT ONE (Hins Cheung)
NOT IN A HUNDRED YEARS (Pakho Chau)
TURN AROUND SMILE (Jason Chan)
DID ALL YOU CAN (Alfred Hui)
ANDRERSEN'S FAULT (Phil Lam)
(11 Gold Songs Due To A Tie In Score)