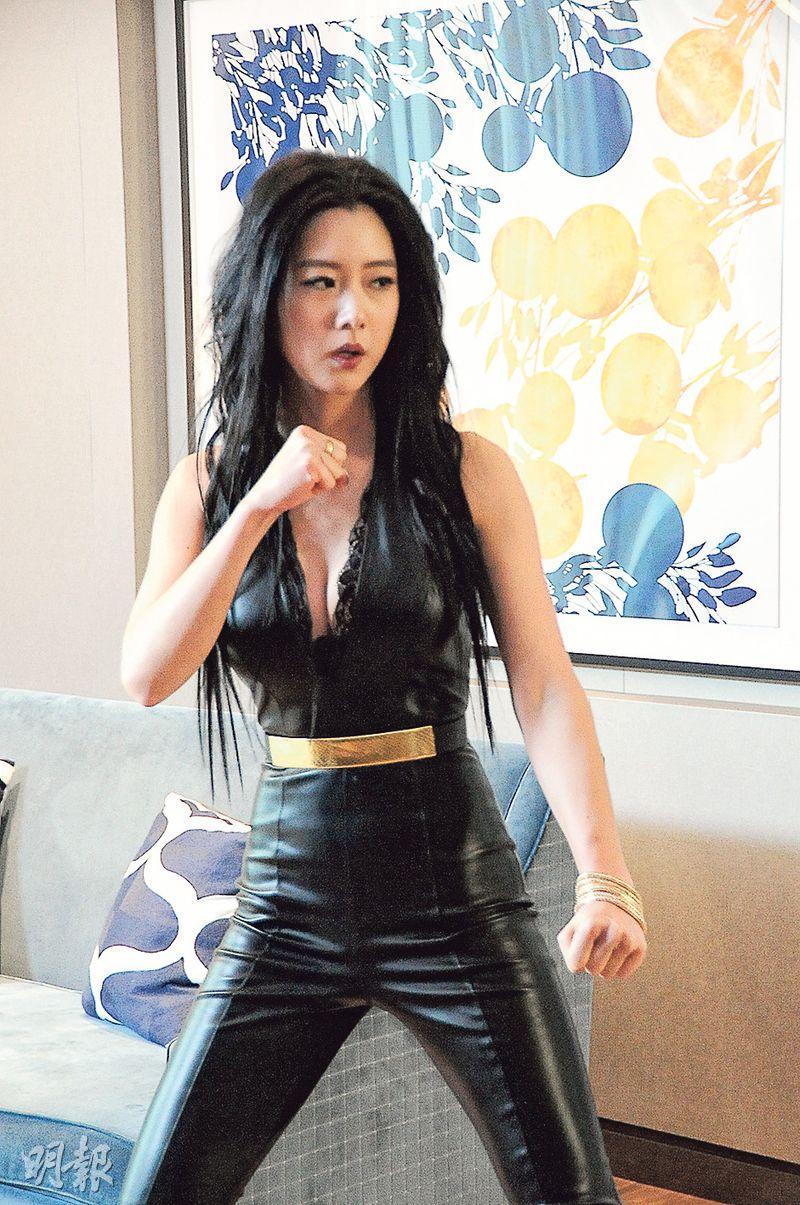 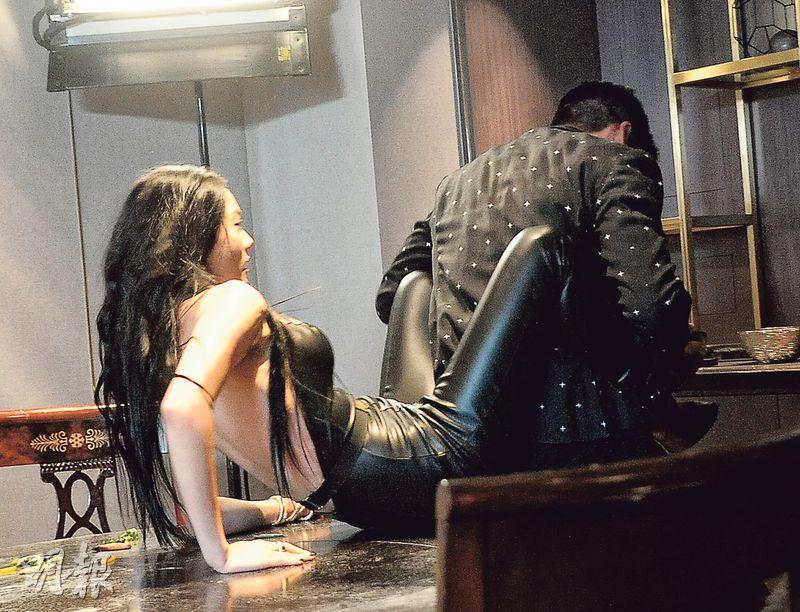 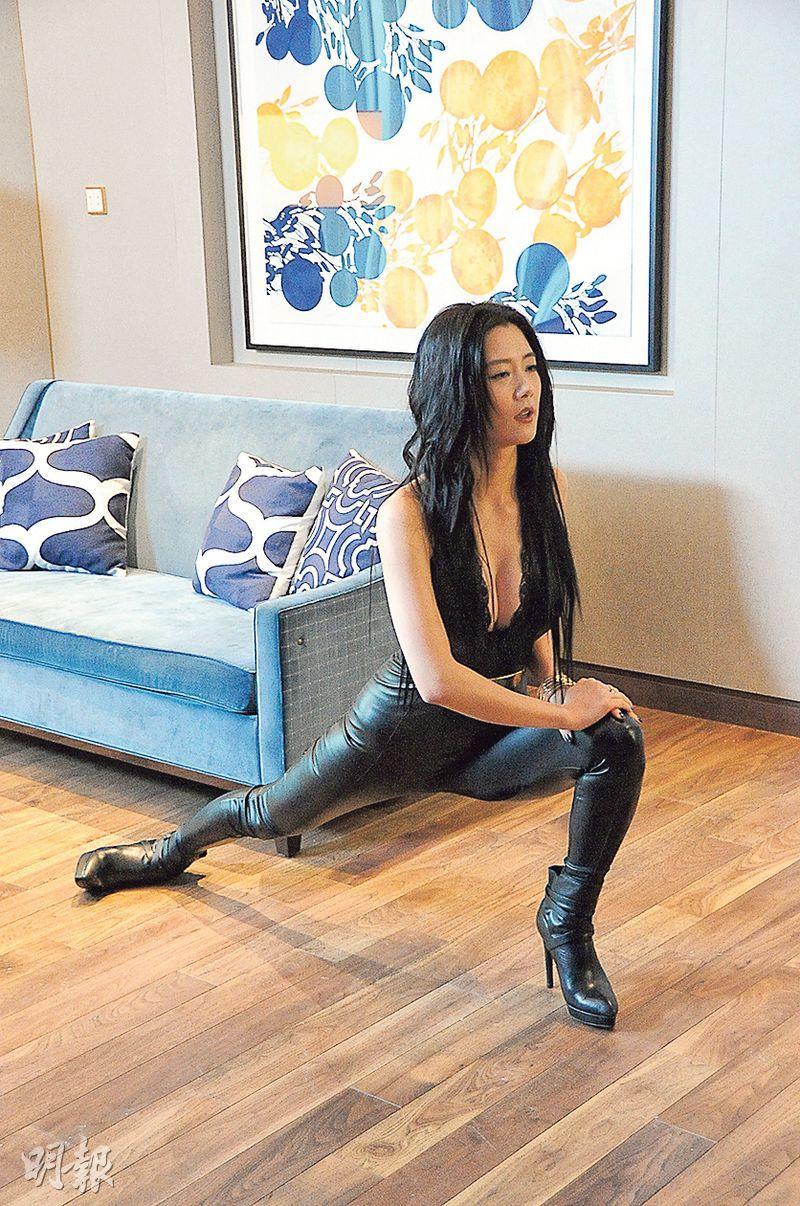 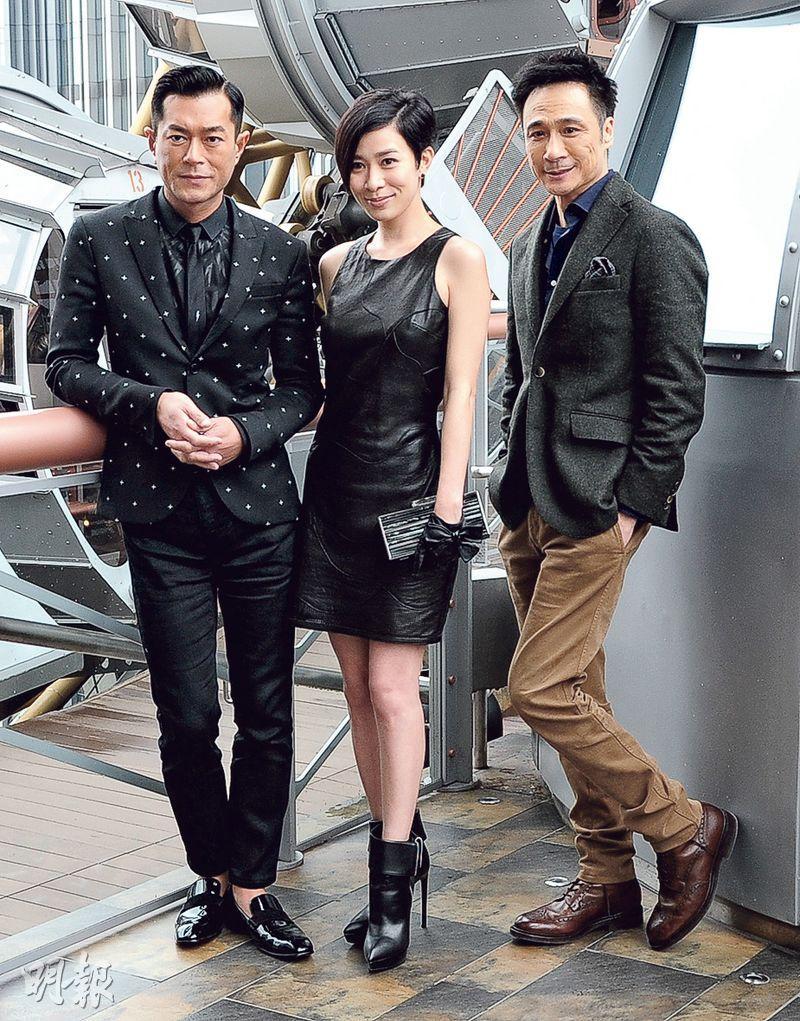 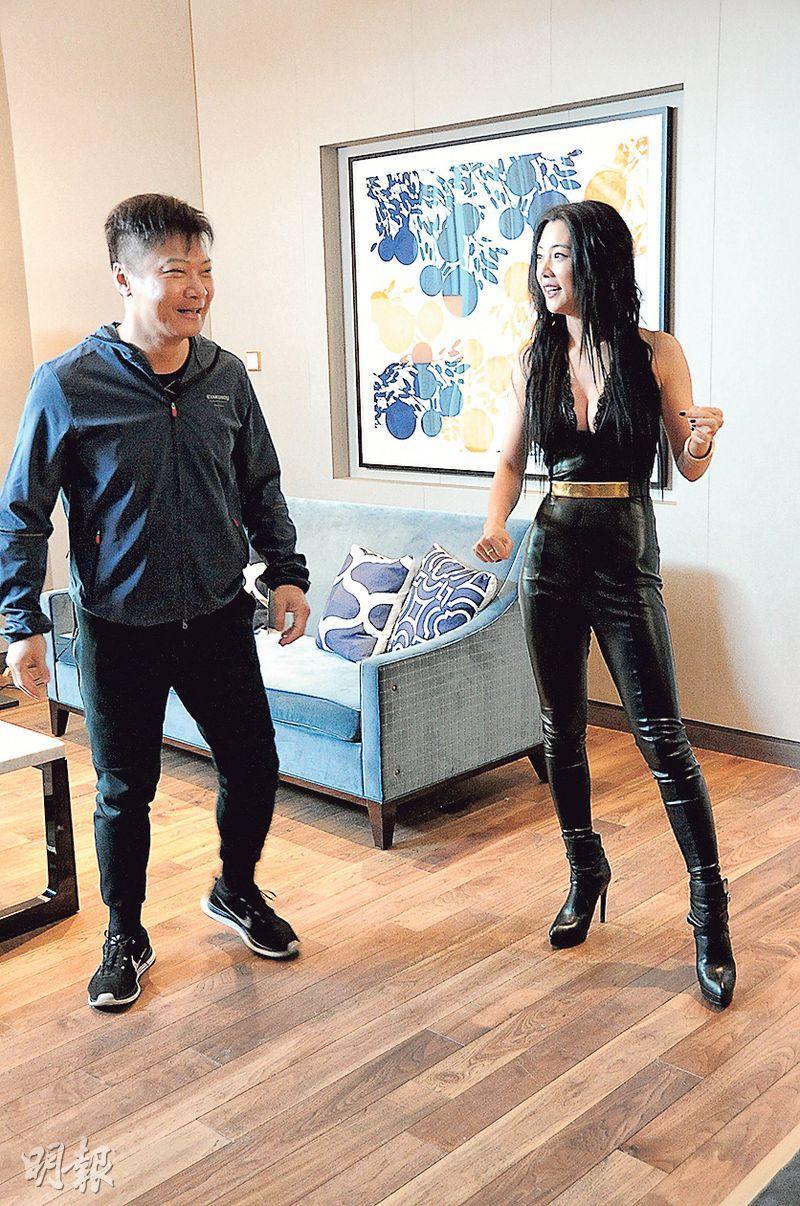 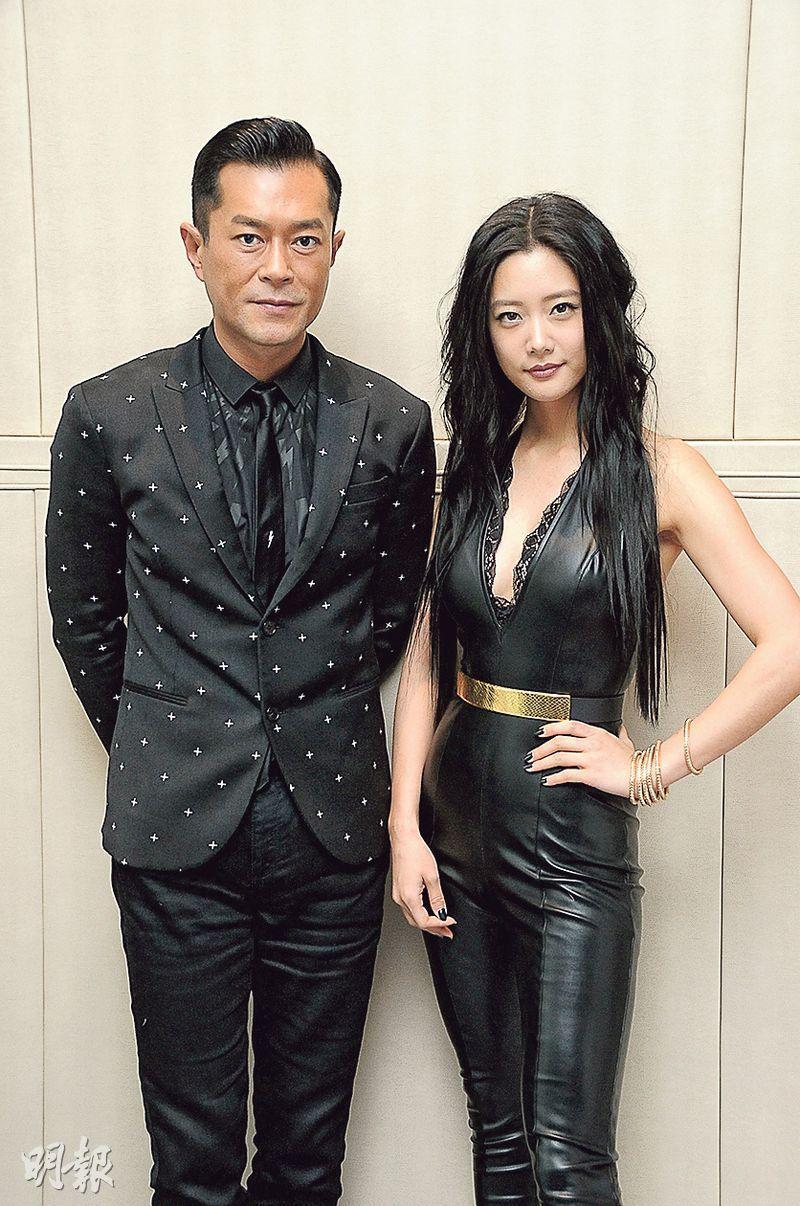 During the shoot, Clara personally performed her own stunts. After listening to action director Chin Kar Lok's directions, she flew onto a table then applied leg scissors on her opponents. Unfortunately Goo Jai did not have the chance to enjoy the "benefit" this time because his double did his stunts for him. Before the official shoot, Clara stretched to warm up.

Clara said that she was very excited about the shoot. Claiming to enjoy making action films, she had a little difficulty with the first day of stunts but luckily she had two days of training before. Clara also revealed that earlier she and Goo Jai had a big fight scene. She even had to strangle him with a rope. She said that she was the most concerned about injuring Goo Jai's handsome face. Clara felt that her sexy costume was very cool. Full of power and strength, her character was very interesting. How did Goo Jai feel about Clara's abilities? Goo Jai boasted that he was "stiff" enough. He joked, "She trained for two days for the fight scene. Two days ago she and I fought for a day. She used wires to strangle me, and in the end the wire snapped. Luckily my neck was very stiff! Of course that wire was just a prop, that's why it snapped."

Speaking of the mosquito spread Zika virus in South America, Goo Jai who will later shoot on location in Brazil was worried. He joked, "I definitely have to have mosquito repellent. With all the mosquitoes there, I would have to drink the whole bottle." Ng Chun Yu played the slots for Lunar New Year wealth, Goo Jai said that he never gambled. He will spend the Lunar New Year in Hong Kong as usual. Because he was the oldest son and grandson, he will have a lot of customs and traditions to perform at home. He will not resume work until the Lunar 6th or 7th.

Ng Chun Yu and Sheh Si Man in the film played superior and subordinate, so they had the most scenes together. Would Chun Yu have a lot of action scene? He joked, "Young dramatic actors like me have to focus on romantic scenes, but this type of action scenes won't be too hard. (Will you have to go to Brazil for the location shoot?) No, with so many Samba ladies there I am afraid I may have a nosebleed. If we stay there longer I would want to go, but taking an over 20 hour flight there for an one day shoot would be worse than going on vacation." Chun Yu also praised Sheh Si Man for getting into shape as soon as she returned to work. He also said that he was a picky actor and that Sheh Si Man was "rather unlucky" to run into him at work.

Sheh Si Man earlier worked on a complex scene and had her first scene with Chun Yu, which she felt very nervous about! Clara had a lot of action scenes but Ah Sheh also had many car chase and stunt scenes that she will have to make. She said that the difficulty would be with her tight fitting costumes that would keep her from adding protective pads. She will not have to go to Brazil for the location shoot so she will stay in Hong Kong to spend the Lunar New Year with her family.

Although Lunar New Year has not arrived yet, Chun Yu already got some New Year wealth. He revealed that recently while shooting in the casino he played the slots and won 2,000 bucks. Of course he had to share it and treat everyone to food and drinks. Will he try again? He joked, "It won't be so small, I will go to a private room."

LINE WALKER shot on location in Studio City Macau for its big and bold outdoor swimming pool. According to TVB the fight scenes were originally planned for a cruise ship, but because of scheduling and itinerary conflicts the location team finally made the change.

One of the producers Elaine Lok Yi Ling said, "Because the story required an outdoor swimming pool that had to be very new, very large and very luxurious, this venue was very suitable for us. Unfortunately due to rain the shoot has been rescheduled for March! Because the film production needs a lot of coordination, this time Studio City Macau has been very helpful not only with the location but also with rooms and transportation. Thus it even became LINE's location sponsor."
Posted by hktopten at 2:11 PM