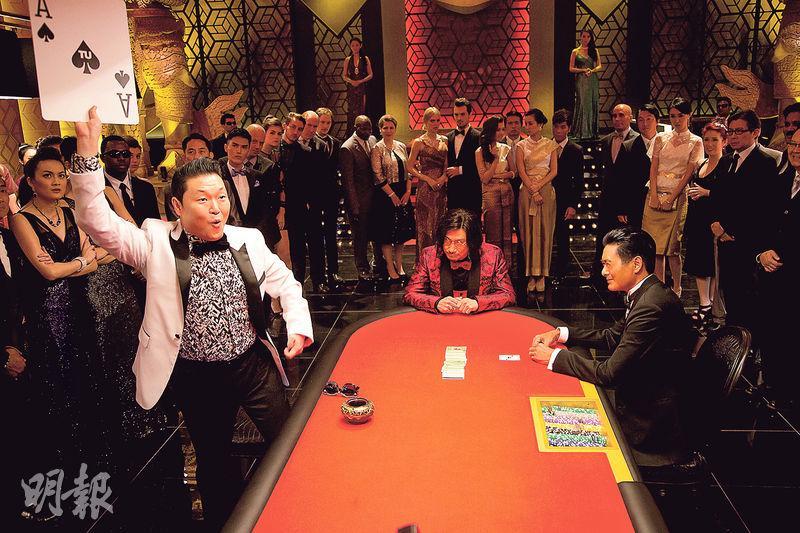 The Lunar New Year film FROM VEGAS TO MACAU 3 (DOH SING FUNG WON 3) will be released on February 6th. Aside from Chow Yun Fat, Andy Lau Tak Wa, Jacky Cheung Hok Yau, Nick Cheung Ka Fai, Carina Lau Ka Ling and Chris Lee Yuchun, the film also secretly invited Korean star PSY to transform into the "Poker King" to battle with Fat Gor! Earlier Fat Gor was a guest presenter at the MAMA Asian Music Award and danced with PSY. This time PSY appeared as a special guest star. The production was very smooth and only took one day's time to complete. PSY on the set was a source of joy, often having fun with his idol Fat Gor. Everyone on and off camera like them both. Hok Yau even admitted, "Working with Fat Gor I can learn a lot about living a healthy life, it's like have a treasure on the set!"

A group of star friends often visited the set, one of them was Jet Li (Lee Nin Kit) who made a surprise appearance to cheer on everyone. He even sat still for for Fat Gor's expertise of taking a selfie. Liza Wang Ming Chuen also attentively visited her husband Law Kar Ying on the set. In addition, the film has the love triangle between Lau Ka Ling, Cheung Hok Yau and Chow Yun Fat, as well as a lot of action scenes. Fat Gor's "God of Gamblers" classic chocolate scenes will also return to the screen in order to bring a rich Lunar New Year to the audience.

In a ping pong battle in the film, Chow Yun Fat and Hok Yau battled in acting and comedy. With messy hair, tee shirt, shorts and a long coat, Chow Yun Fat's "Ken" looked hilarious. Through his eyes and excellent acting he dominated Hok Yau. Chow Yun Fat with his line, "I am Cheung Mo Gei, I have to eradicate a bad guy like you to avenge my god father the Golden Mane Lion King."

Hok Yau was happy to work with Chow Yun Fat again after so many years. Speaking of Chow Yun Fat's humorous ways on and off camera, Hok Yau said, "Actually I want to be funny with everyone, but my character is set up like this."
Posted by hktopten at 6:39 PM