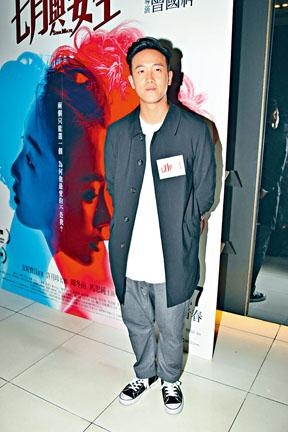 The film received seven nominations for the Golden Horse Award next month. Tsang Kwok Cheung was nominated for Best Director. Was he confident? He said, "I have zero confidence. Although my girlfriend has encouraged me, I see how sharp the other directors are. I never even thought about being nominated." He also said that he has not chosen what he would wear, but he would bring girlfriend Venus Wong Man Yik, his father and sister Bowie Tsang to walk the red carpet together. Did his father give him any advice? He said, "He told me to be more careful with my next movie, not to rush into it and to take my time. Because I have a lot of other scripts tossed at me, I have to consider them carefully. I don't want to make a movie for the sake of making it."

Wai Sze Nga said that she has wanted to watch SOUL. The film was about homosexuality. She was reminded of a same sex friend in secondary school. They were so close that they would constant sleep and bathe together at each other's homes. When they went out they would hold hands. She said that later they both had boyfriends but would be jealous of each other. Sze Nga said, "Even my boyfriend and husband couldn't replace her." She pointed out that this friend still spent nights at her home. Did they still bathe together? She said, "I am willing, if she suggested it I would agree because we grew up together." Did Sze Nga ask her friend if she liked her? She said, "I did, I even said that if we couldn't find a boyfriend we would live together. However we both knew that it wasn't like that."
Posted by hktopten at 2:00 PM