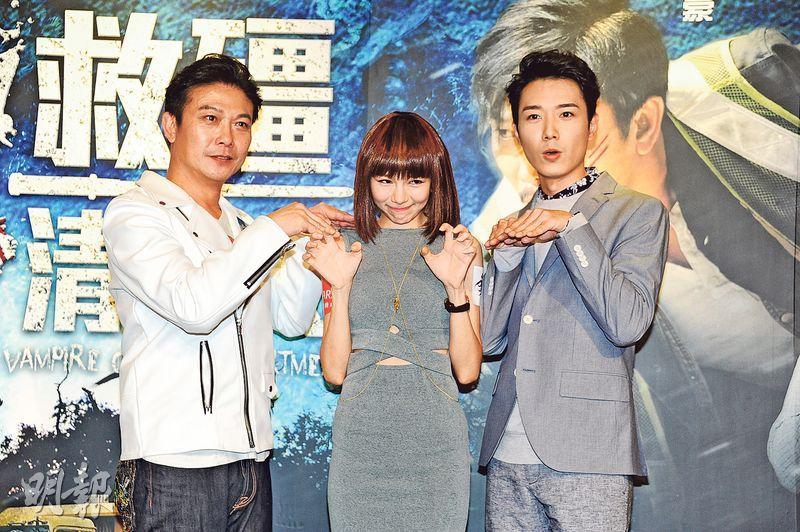 Chin Siu Ho said that he was very happy to be able to work with the goddess, but in the film they had no romantic scene. Siu Ho stated that he was envious of Babyjohn. "He ad the Goddess have romantic scenes, I only face vampires, while he faces a beauty. Ha Yu really brings nothing but trouble."

In her first debut Lin Ming-Chen played a female vampire. She at first thought that she was playing a happy ghost, but actually she was not cute at all. She was even very terrifying, but after finishing the film she fell in love with making movies. She also said that she has watched Chin Siu Ho's vampire movies since she was little, so she looked forward to and was nervous about this performance. Speaking of being chased in this film, she hoped that next time she would be able to kill people.

She was dressed in a more reserved way two nights ago, Ming-Chen said that she showed her abdominal muscles and was very sincere. Siu Ho said that Ming-Chen's sexiness came from her looks and inside. He also praised her as a sexy goddess to him. Without any line she still performed very well, and she was very hard working.

Yun Yi came to support her friend Babyjohn. They even hug during their photo opportunity. Speaking of her father Adam Cheng Siu Chau's concert later, she said that she might not be able to attend. "I won't be in Hong Kong during that time. Actually he already asked me to be his guest very early on, but I would have to work overseas. So it really was out of my hands, it's not that I don't support Papa. (Will you send a video to show your support?) Video or anything I will be able to do I will do. This time will be a celebration of his 50th anniversary in the business. I told Daddy it was really sorry, I really wanted to attend but very regrettably I wouldn't be able to. I will go again when he will celebrate his 60th anniversary."

Babyjohn said that he was very thankful of Brother Ha Yu's trust in putting him in the lead role and pairing him with a goddess. Even Brother Siu Ho said that he was very jealous, but he even thanked Brother Siu Ho for thanking him a lot without any reservation. Speaking of working with the goddess, Babyjohn said that when he first met the goddess he thought that she would be distant. "I spent 15 minutes to break the ice with Yun Yi, but with Ming-Chen I didn't even need 10 minutes." Yun Yi pretended to be jealous and said, "That means she wins." Babyjohn tried to cheer her up and said, "If you want to talk about being more familiar, you win." Yun Yi immediately flashed a victory sign and said, "Yeah! Women really want to win."

Guest star Chim Shui Man recently was caught looking at storefronts in Sai Kung with his girlfriend like he might be opening a cafe. He clarified that he was only a creative director for a friend's store opening. He did not invest. He also said that he had three plays under preparation recently.
Posted by hktopten at 7:43 AM