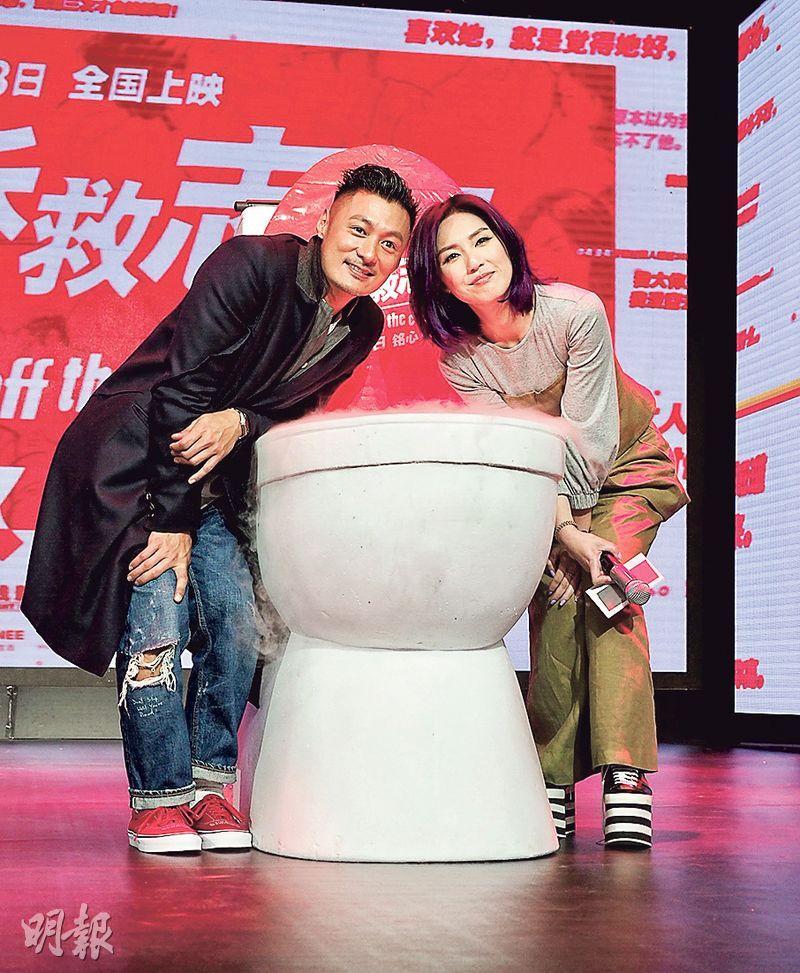 The film LOVE OFF THE CUFF (CHUN GIU GAU JI MING) yesterday held a Beijing press conference. Leads Shawn Yue Man Lok, Miriam Yueng Chin Wa and the director attended. The host tested their memory of the classic lines and scenes from the first two films. Chin Wa and Lok Jai performed LAN MONG CHUN GU in a mini karaoke room. Chin Wa even revealed, "Romance usually starts at the KTV. My husband and I also met at the KTV."

The host asked them whose song they would sing at karaoke? The director said, "When I was little and at school, I would sing Chin Wa's songs at KTV." The mischievous Lok Jai added, "Me too, what song did you sing? YOUNG GIRL'S PRAYER?" Chin Wa struck back. "Are you psychic? Singing my song when you were little." The two big kids cracked up. Later the host invited Chin Wa and Lok Jai to the mini K room on the stage to reprise their scene. Lok Jai only focused on joking around with the director, so Chin Wa could only drag him into room and said, "I sing, you dance!" Lok Jai danced as Chin Wa sang LAN MONG CHUN GIU. Later they even posed for a loving photo outside the K room.

At the press conference the audience got many surprises. First the director suddenly asked Lok Jai when he will wed. The audience cheered. Lok Jai answered, "Leave it to chance!" Then he jokingly blamed the director for setting him up. Later Lok Jai also became "Mark Gor" and pointed a banana at the director's head. Chin Wa asked him, "Why do you always have a banana on it? You did on the set, and you do at the press conference!" He ate the banana as he said, "I didn't have time to eat before!"
Posted by hktopten at 6:33 PM