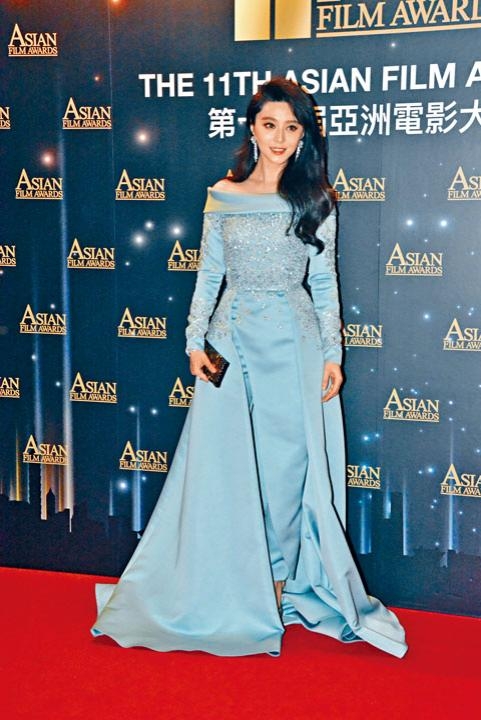 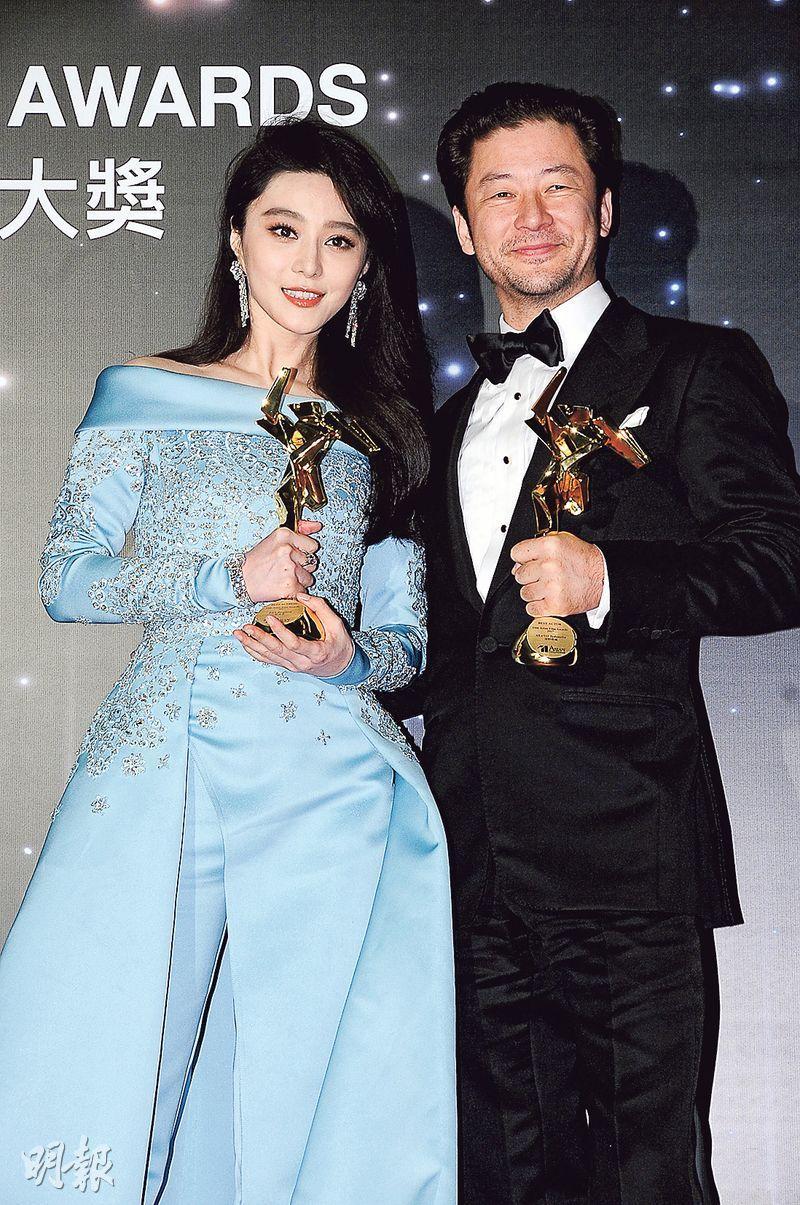 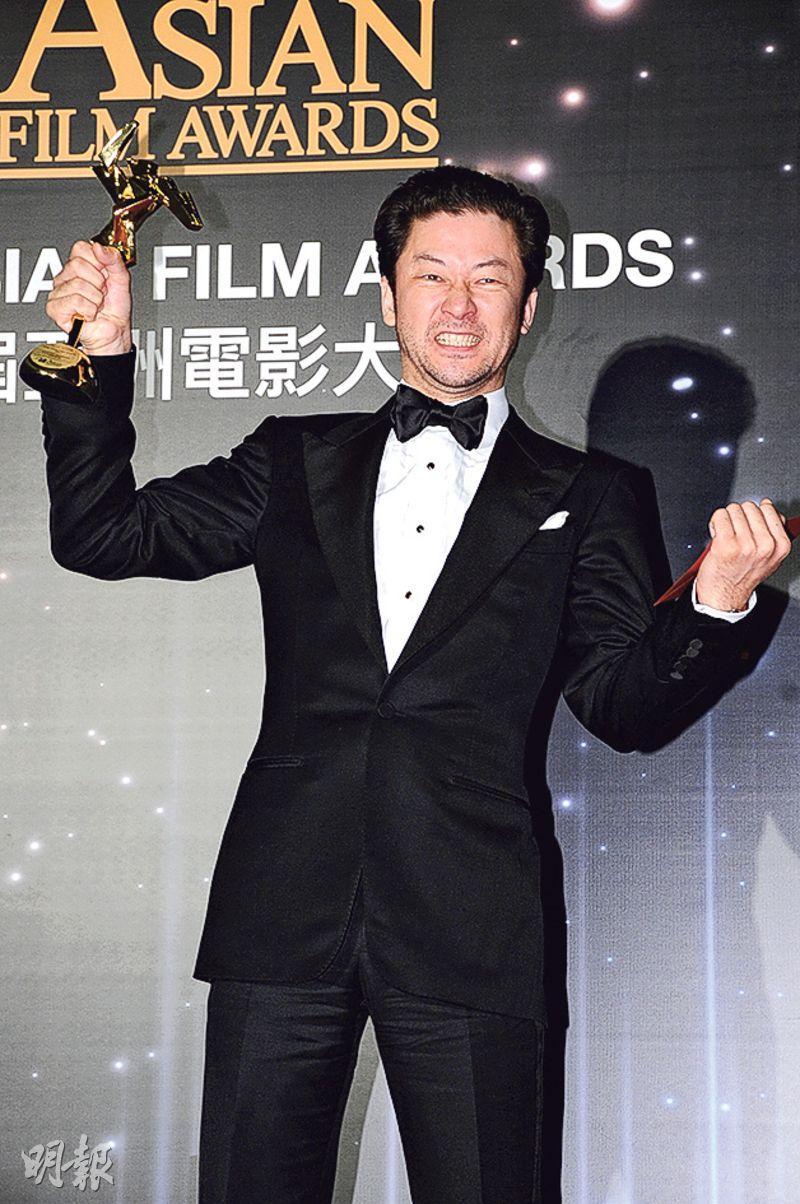 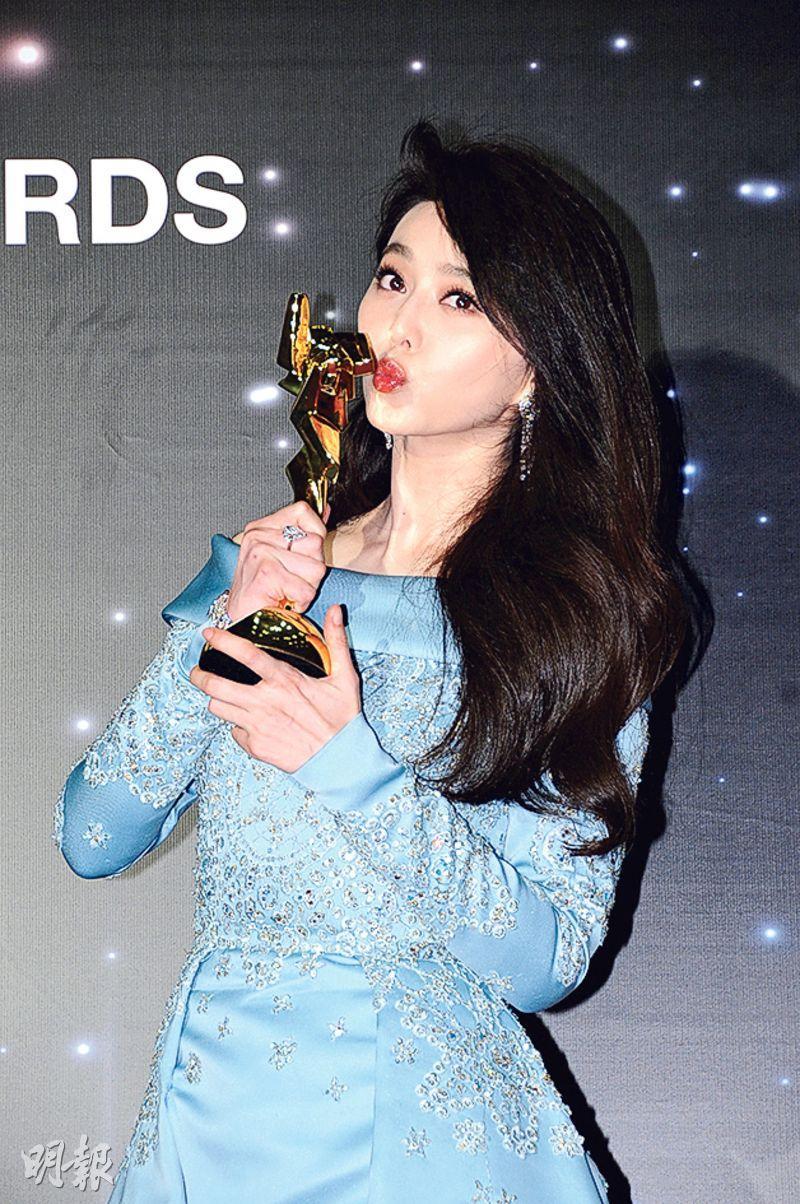 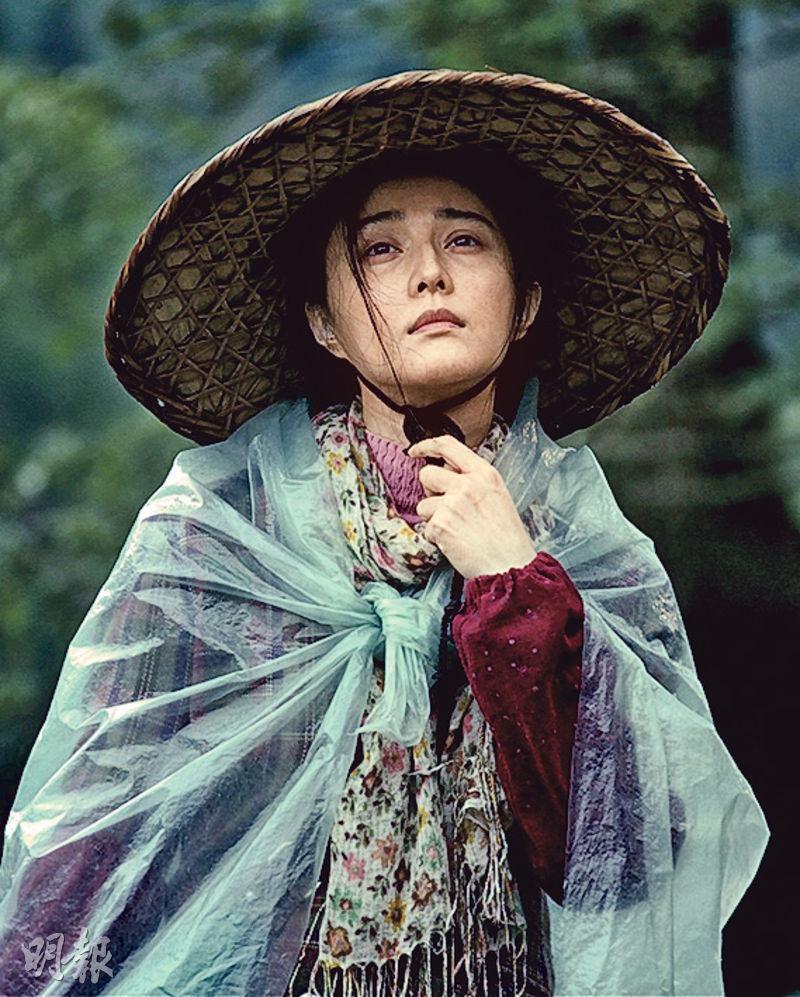 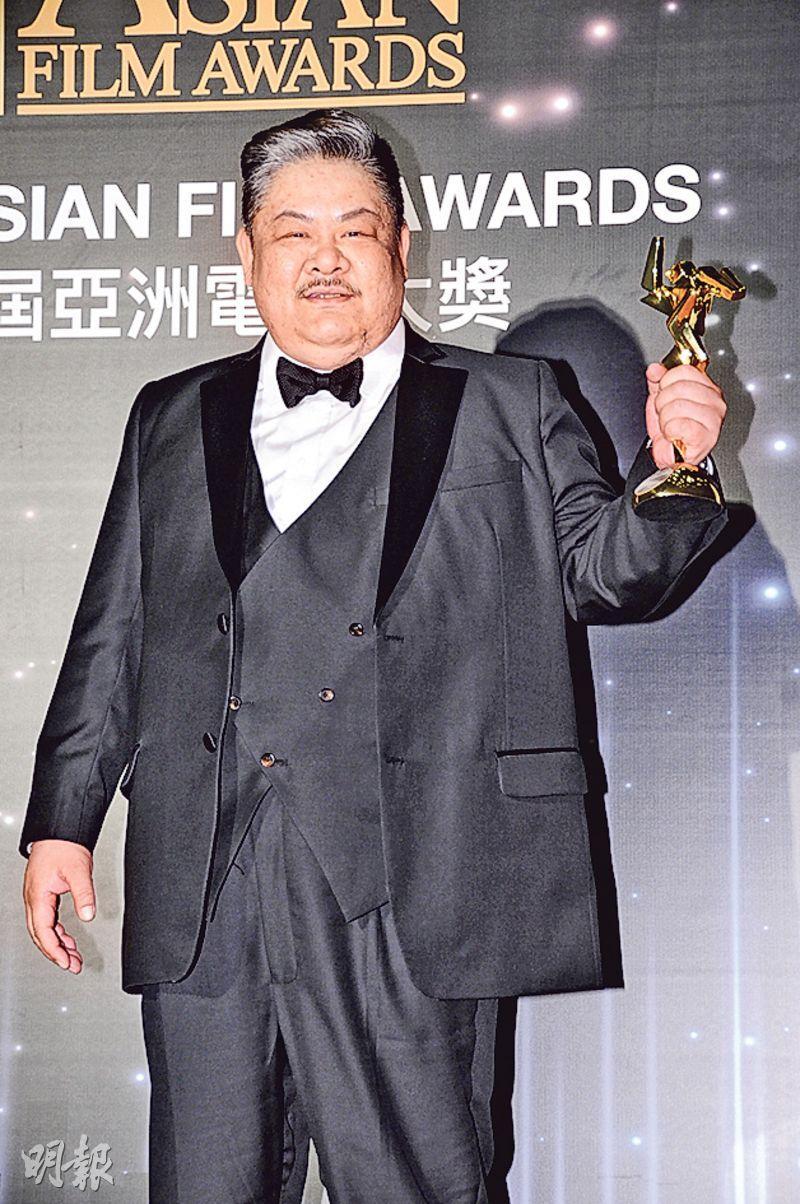 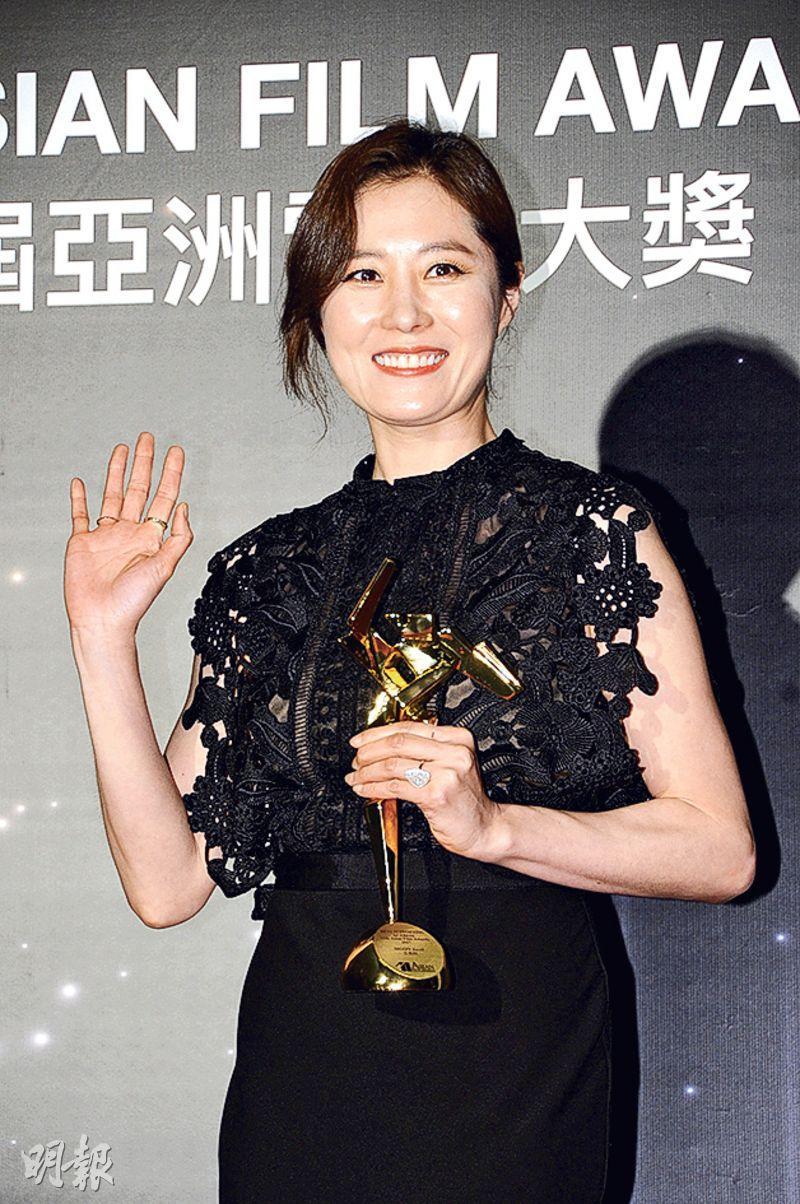 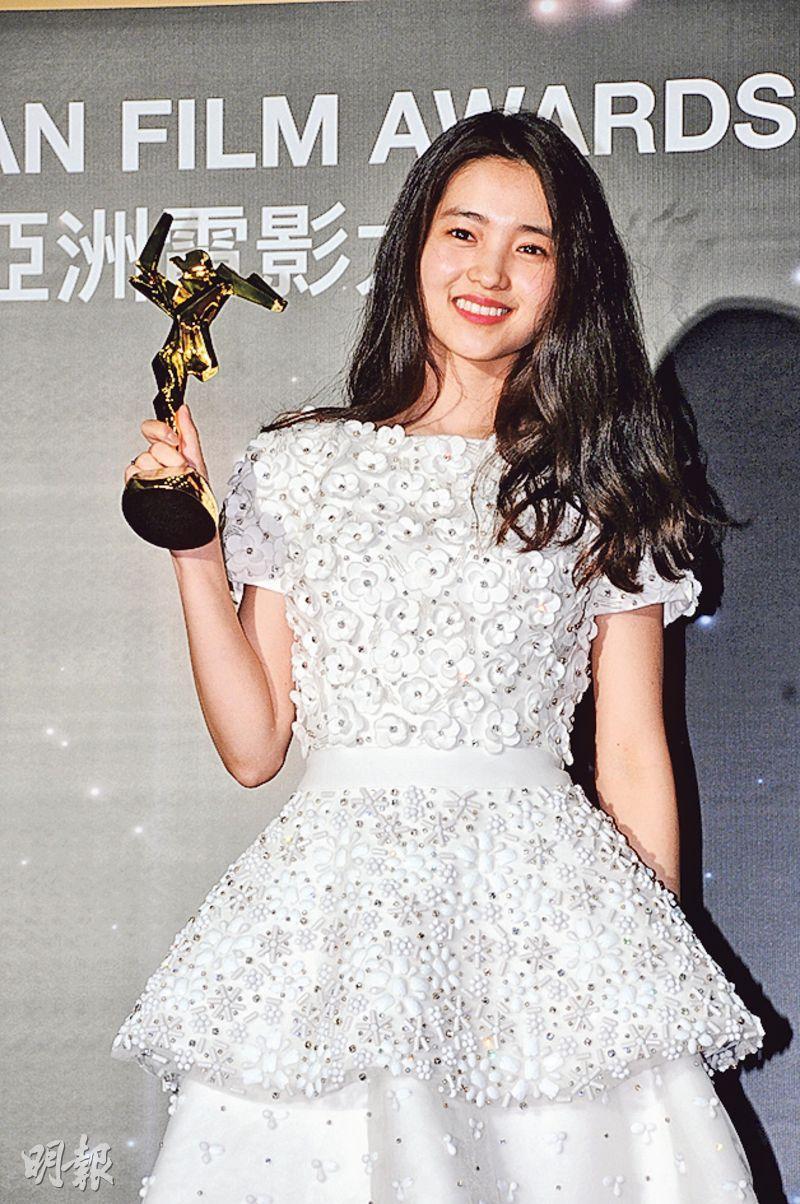 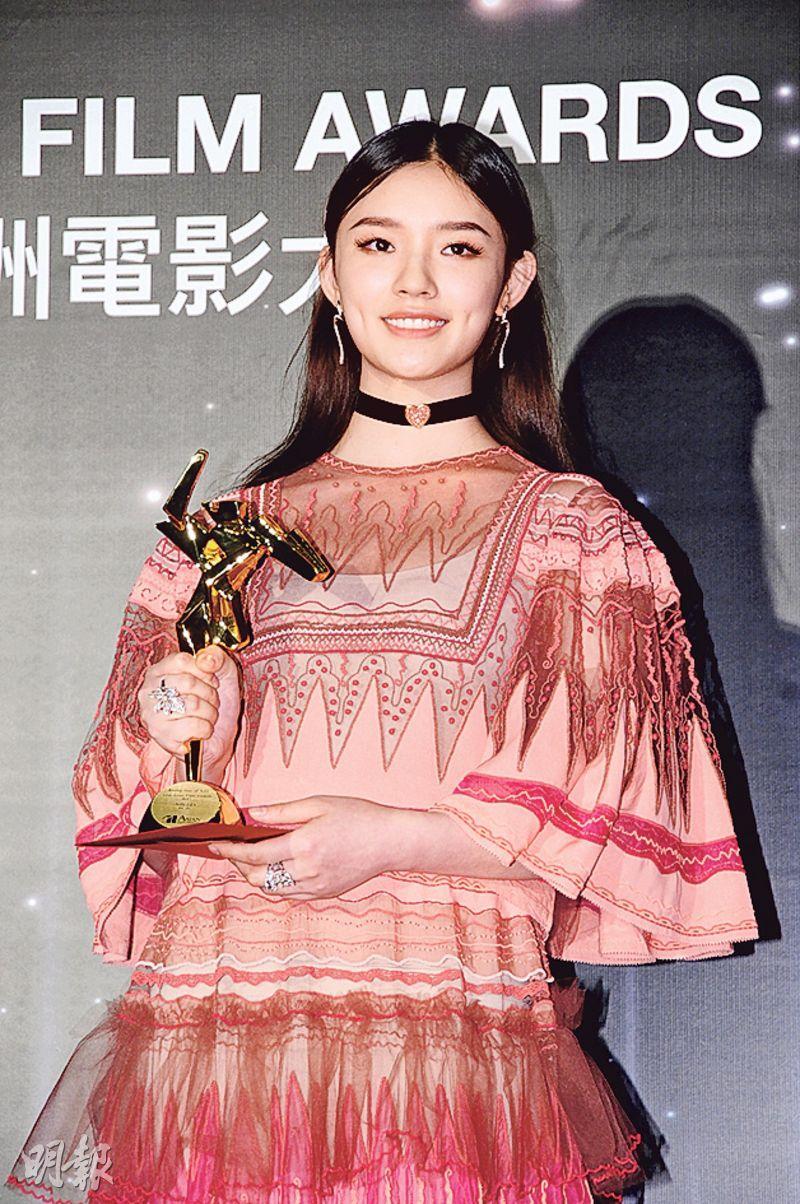 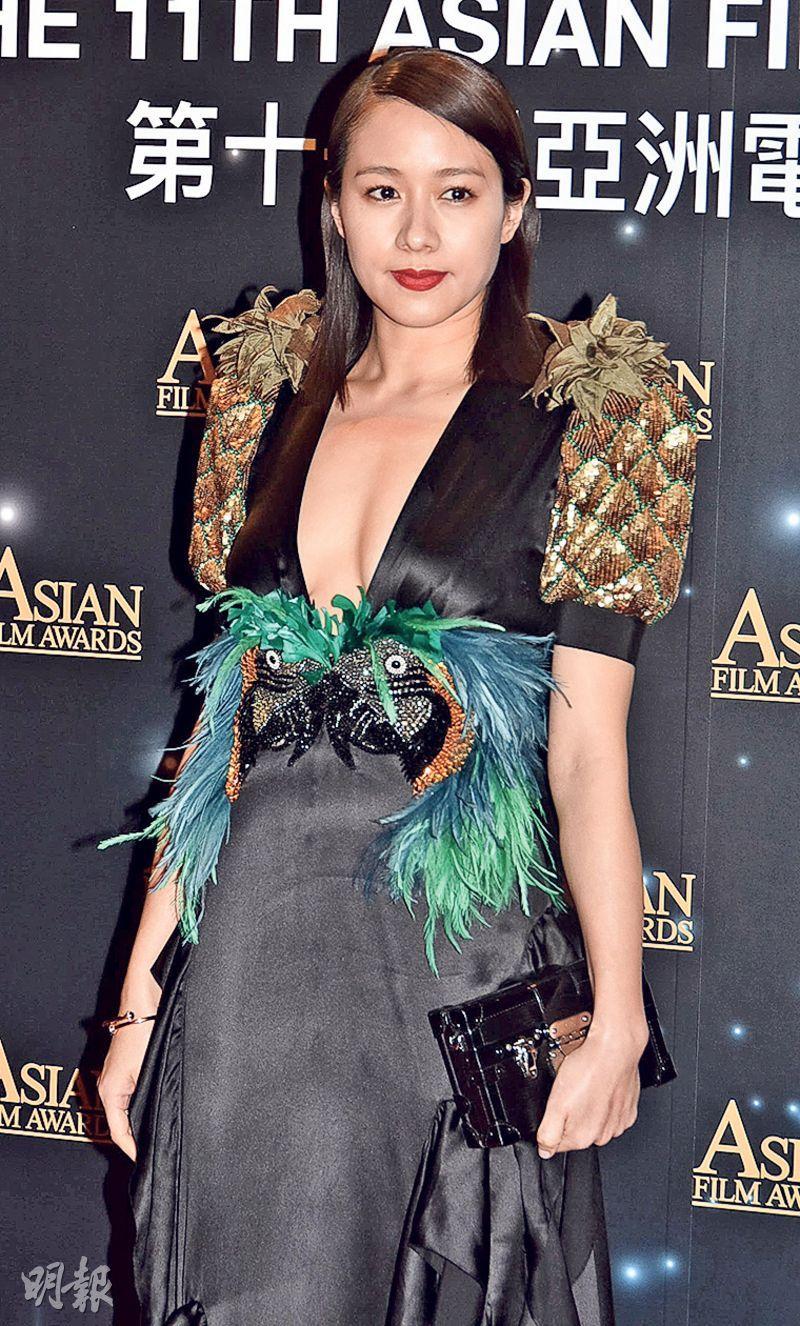 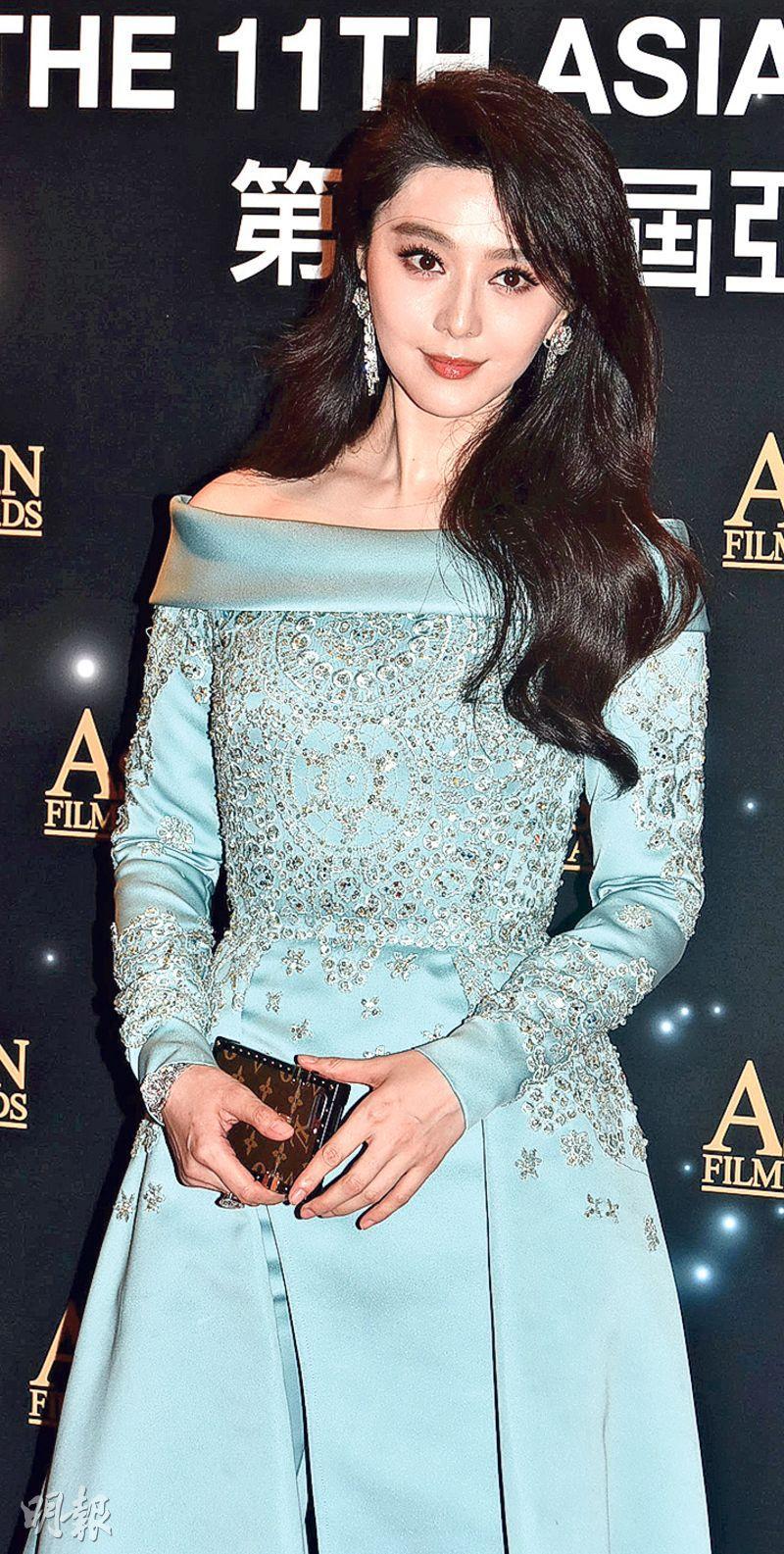 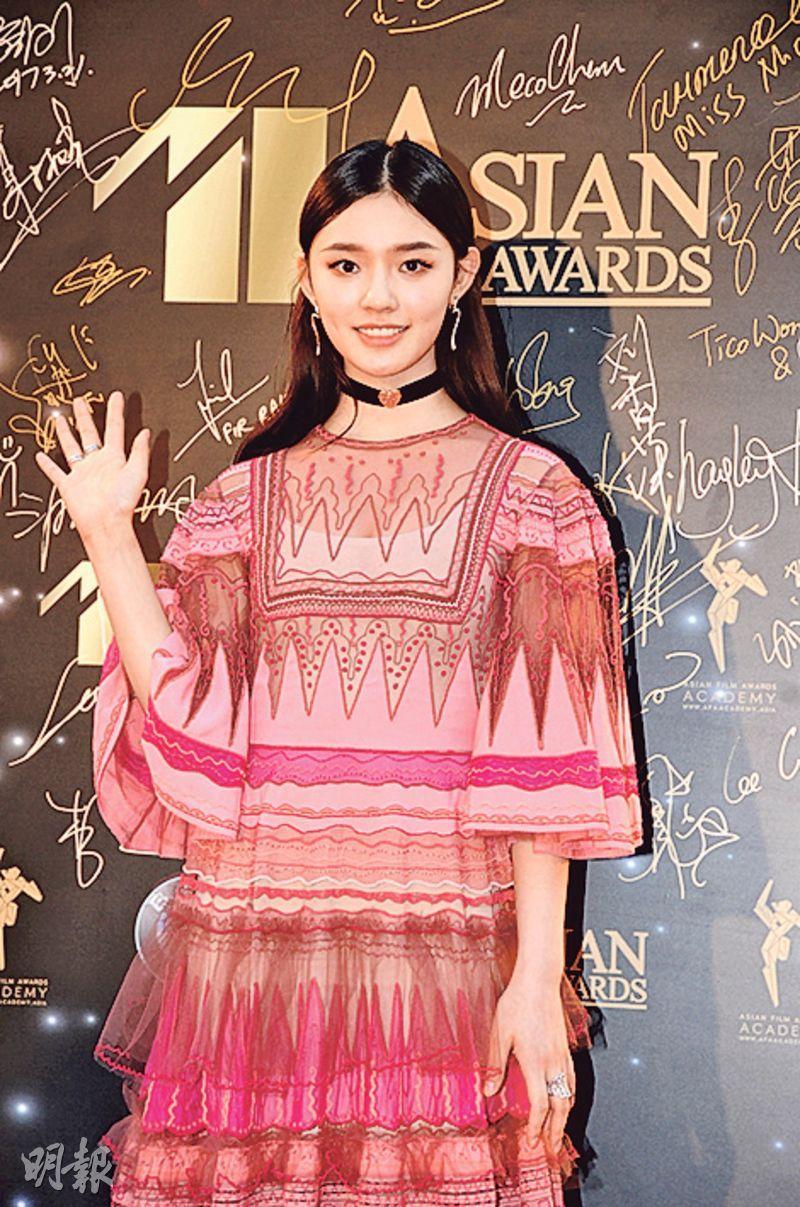 When Japanese band X Japan's Yoshiki appeared, fans kept screaming. Yoshiki made a X sign with his arms and did not turn away any fan seeking a photo.

Earlier on a Mainland program the host wished her boyfriend Li Chen to have three children in three years. Li Chen replied "I hope so." Fan Bingbing explained. "He was asked at work. Actually children are gifts from Heaven, it's fate. I don't have any plan to be Mommy, just let it take its natural course. (Do you like children?) Yes!"

Siu Chai entered with his wife Tina, then he was interviewed with Lam Ka Yun. Ka Yun was very happy about praises of what she wore. She joked, "I dress like this when I do the dishes too. (Did you ask your husband about it?) Huh? It's a little better if he doesn't know. (Are you afraid that he would scold you?) No, he wouldn't." Siu Chai said, "Her husband should be happy, having such a pretty wife." Would Siu Chai let his wife be as sexy as Ka Yun? He said, "It's OK, (Would you let your wife dress up for the Hong Kong Film Award?) I don't even have time to prepare for it myself. (You very rarely attend with your wife.) Today I am very nervous." Then he changed the subject and said that he and Ka Yun have not worked together for a long time. Speaking of William So Wing Hong becoming father, Siu Chai said, "I knew a long time ago, but I had to keep it a secret because I didn't know when they wanted to make the announcement. Ultimately today is filled with joy. I will wait for a few days before visiting Hong Jai, because new parents will be very busy. (Would you give him any fatherhood advice?) It's been a dozen years or so, I have already forgotten."

Mung Ka Wai was the host with Cyrus Chow Tsz Kui. Because of the live broadcast the job was much more stressful. Luckily she only needed to speak Cantonese all night, as foreign guests would have official translators.

Ka Wai's husband Dior Cheng Yi Kn played Wind. Recently Michael Tse Tin Wa's Wind costume for THE STORM SHOW 5D musical was unveiled. Who was more handsome as Wind? Ka Wai said, "Tin Wa's is a stage costume, it would be different. (Which one do you like?) Of course the live action version more (referring to Ekin). As an actor he has to try. (Has Ekin seen Tin Wa's costume?) He is working on a movie in Europe, I can't get in touch with hm. (It's very hard for anyone to take Ekin's place?) Of course no one can replace my husband. Actors have to try everything. If I have to play Wind I would give it a try too. (Is it harder for men to grasp long hair?) You can comment on just a music video or photos. You have to look at everything. I will support Tin Wa."

Kim Tae-Ri had many daring sex scenes with Kim Min-Hee in the film. She said that at first when she got the script, she already liked it very much and decided to take the role. How did she cultivate the chemistry during the shoot? Kim Tae-Ri pointed out that before the production began they had table reads and rehearsals. Director Park Chan-Wook would have meetings everyday and discuss that day's shoot for everyone to cultivate chemistry easier. Will she work in the buff again? She said that she will if the story will require it.

Recently Kim Tae-Ri has been working on a new film LITTLE FOREST with Ryun Jun-Yeol. She said, "Although he is young, his life actually is very orderly. His self management is very strict." Has she paid attention to any Hong Kong actor? She said that she really admired Maggie Cheung Man Yuk and was a fan of hers. She really wanted to meet her, but did not dare to think about the chance to work together. Instead she felt that she would have a greater chance to work with Tang Wei because her husband was Korean. She also said that Tang Wei and Kim Min-Hee were her role models, as she hoped to become outstanding actresses like them. She also praised Hong Kong film for its story and style. Even if she did not understand Cantonese she still felt it was funny. She would like a chance to work on a Hong Kong or Mainland film.

"Sing Girl" Jelly Lin Yun with MERMAID (MEI YUN YU) received the 11th Asian Film Award Rising Star of Asia award and the Best Newcomer nomination. Yesterday Lin Yun appeared at the press conference. She said that she was very happy and nervous about getting the award. She said that if she wins another award she would thank director Stephen Chow Sing Chi and her family. She hoped to have a chance to take Sing Yeh to dinner.

Speaking of being caught in Shanghai being close with Sing Yeh, she explained that at the time they attended the press conference together. "We were talking about the movie. I would constantly disturb him, ask him how to play ths movie and give him the script." Will she work with Sing Yeh again? Lin Yun said, "I don't know, it would depend on his mood. (Has Sing Yeh praised you?) Lately he has praised me more and more, it's very strange."

Earlier Lin Yun starred in Best Foreign Film Oscar award winning director Jean-Jacques Annaud produced new film. She said that the film has been completed. The most memorable for her first horseback scene, which felt very exciting. However she was not injured because the team took good care of her. Speaking of her similarities to Shu Qi, Lin Yun said that she was her goddess. She felt very honored to be mentioned in the same breath as her.

When fresh out of the Best Actor and Best Actress Tadanobu Asano and Fan Bingbing were posing for photos backstage, Fan Bingbing taught Tadanobu Asano the kiss pose. However because she held the award up for too long, Bingbing said that her arm was very tired.

Fan Bingbing happily said, "I never thought that I would win. All the nominated actresses were very sharp. Each time was a good film and the competiiton was very fierce. I am very lucky, the award is with me. (Would you give the award to director Feng Xiaogang?) Right, the director just turned 60. I have been thinking about what to give him, this award is perfect for his birthday present. The last time when I won an award in Spain, it was my birthday. Now both awards can be placed at the director's office. At first this film wanted a good looking actress to play Madame Bovary and brought a lot of controversy, thanks to the director and the cinematographer for insisting on working with me. 12 years ago I worked with the director too and the movie also won an award. At the time it was my first film, I thank him for trusting me."

Will she work with Feng Xiaogang again? "With a good character, potential we will be able to work together again." Will she tell Li Chen the good news right away? She sweetly smiled and said, "I will, I couldn't get a signal inside." Feng Xiaogang said, "This award truly is a great birthday present. I am the happiest to see Bingbing win one Best Actress award after another with this character. I never imagined that it would win 'Best Film'. I am truly too happy."

Venice Film Festival Best Actor Tadanobu Asano with HARMONIUM won Best Actor. He said backstage, "I feel great! I want to come again next year. Actually this time the character was a little complicated, I needed time to understand it, communicate with the director and have detailed exchanges with my co-stars."

Tadanobu Asano revealed that he will be very busy. He just finished a television series and will soon start work on a film.

Winning his first Best Supporting Actor with TRIVISA (SHU DAI JIU FUNG), Lam Suet was very happy and said that in the past when he saw others won he thought it would be great to win once himself! This time the competition was very strong, he was relaxed and never thought about winning an award. Thus when he was announced he was stunned. His future plan will be working hard on doing this job well.

Lam Suet revealed that earlier when he worked on DUNG DUK DUT GUNG, he turned around and descended the stars when he suddenly got dizzy; because he was fat and clumsy he could not get up even if he wanted to. Finally he was sent to the hospital for treatment; the doctor said that his blood pressure was very high and his heart was bad. He needed medication and observation. Lam Suet sad that 5 years ago the doctor already told him to lose weight, but over 5 years he only gained more. Now he weighs 148 kg and would have to lose at least 30 pounds.

Korean actress Moon Su-Ri with THE HANDMAIDEN won Best Actress. "I was very surprised, I never thought that I would win. I really am so happy that I don't know what to do!"

Tsui Hark received his Lifetime Achievement Award from friend Johnnie To Kei Fung and Bona Film's Yu Dong. To Kei Fung said, "I represent Hong Kong, film fans and film culture to present this award to Tsui Hark, it is my greatest honor!" To Kei Fung said that Tsui Hark was not only "Big Hero Tsui" or "Old Master", but also "Great Change Tsui" because no one would ever know what he would do. However he did was fatal. For over 40 years his films had endless variety. He believed that his passion for film would not decreased for another 40 years. He praised that no one would be able to surpass Tsui Hark's wuxia world.

Tsui Hark said that the term "Lifetime Achievement" was enormous. Few films that he made pleased him and many could be improved upon, only this way would he be even better at making movies. He wanted to thank people who have worked with him and supported him. Tsui Hark sent his regards to Andy Lau Tak Wa, who was recovering at home, and wished him a speedy recovery.

Cheng Sau Man received the Excellence in Asian Cinema award. Sammi received the award from frequent co-star Siu Chai. Although she has not won Best Actress, her passion for film has not reduced. She humbly said that in comparison to many veteran filmmakers whose determination for film would never waver, she still was far from being "excellent". She shared this award with three people, To Kei Fung, Wai Ka Fai and Lau Tak Wa. All 3 were her film mentors.

Sammi said that film was a dream factory. With you have a dream in your heart, you should not underestimate the dream. Often only people with dreams in the their hearts would be able to make them come true.

BEST FILM
I AM NOT MADAME BOVARY

BEST ACTRESS
FAN Bingbing (I AM NOT MADAME BOVARY)

BEST CINEMATOGRAPHY
LUO Pan (I AM NOT MADAME BOVARY)