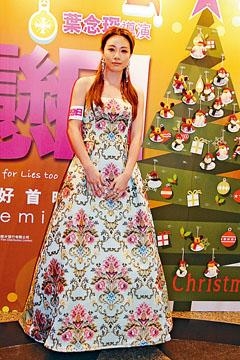 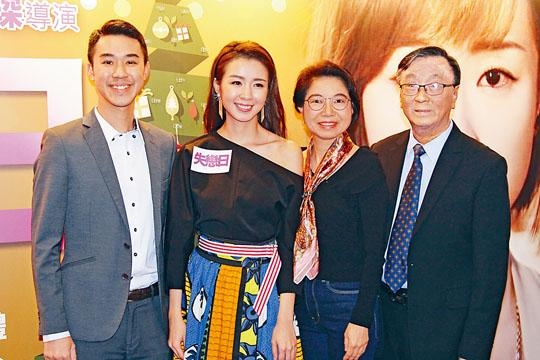 Stephy said that the shoot took place after her break up with Alex Fong Lik Sun. She joked that she felt like the director was pouring salt on the wound, when she first heard the title she was a little hesitant. "I was afraid that people would say I was speculating, but after hearing the story I found out that t wasn't just about love. I felt that personal relationship shouldn't tie me down so I just took it." She said that she has suggested a title change but she could not think of anything. In the film Stephy and Kam Yin Ling played estranged daughter and mother, she even had to be slapped. "It took 6 or 7 takes, I got dizzy after one of the takes. After she slapped me I was totally alert. She was like a martial art expert, very strong. When it hit I really cried."

Did Stephy invite her former boyfriend Fong Lik Sun to the premiere? She admitted that she once thought about inviting him. "Everyone joked about asking him to come, but in the film I had another half -- Lau Ho Lung. To avoid any awkwardness we didn't. I hope he would go to the movie on his own." After their photo of the century last time, Stephy said that she ran into Siu Fong again recent at a colleague's wedding banquet and felt very awkward. Friends did not dare to talk to them. Siu Fong sad that she definitely would not ask him to spend Christmas together. Stephy said, "He is right. We can do other holidays. Christmas is too sensitive."

Making her big screen debut, Mak Ming Sze two nights ago held support from her parents, brother, company executive Elaine Lok Yi Ling, Ada Pong Cheuk Yan and senior colleagues Jennifer Shum Hung Yun, Tray Chu Tsin Suet and Toby Chan Ting Yan. For her 25th birthday, her friends chipped in for a tablet. Did her old flame Joe Lam Jok chip in? She played dumb and said, "I would have to come back and check." Busy with her TVB series LINE WALKER 2, she will have to work in Shenzhen on Christmas. She sad that her parents have already volunteered to accompany her.

Lau Ho Lung sad that he will be working on a movie on Christmas and spend the holiday with all guys. His girlfriend Joey Yung Cho Yi hoped that he would celebrate on the 25th with her. She said, "After work I of course want to meet up. Hopefully we will work in the morning and get off early." He also revealed that he already got a gift for his girlfriend. What would he like to get for Christmas? He said, "The older I get the less gift I get, I don't really like anything. (Just Joey?) OK! But she isn't a present."

Jennifer Shum was asked if her former boyfriend Benjamin Yuen Wa Ho's thank you speech to her at the TVB Anniversary Awards very touching. She said, "I know about it. Every winner's speech feels very touching. I really appreciate his thanking me. As a friend I am happy for him." Yuen Wai Ho wanted to take her to dinner. Did she receive an invitation yet? She said, "Not yet, when friends call me I would pick up. (Would you go?) He is so busy!" They have broken up for over a month. Although he wanted to get back together, she had no such intention yet. "I need to adjust. Being friends has been rather pleasant. We stay in touch. (Would you really not give him a chance?) This is a very good question, I thought about it. How many chances do I have to give before they are enough? I am the most certain about our relationship, over the three year relationship I have given chances, it wouldn't be the first time." She said that she understood everyone really wanted them back together, but she decided to break up because she did not know how to maintain a relationship that has lost trust. She hoped that everyone would give them space.
Posted by hktopten at 6:03 PM