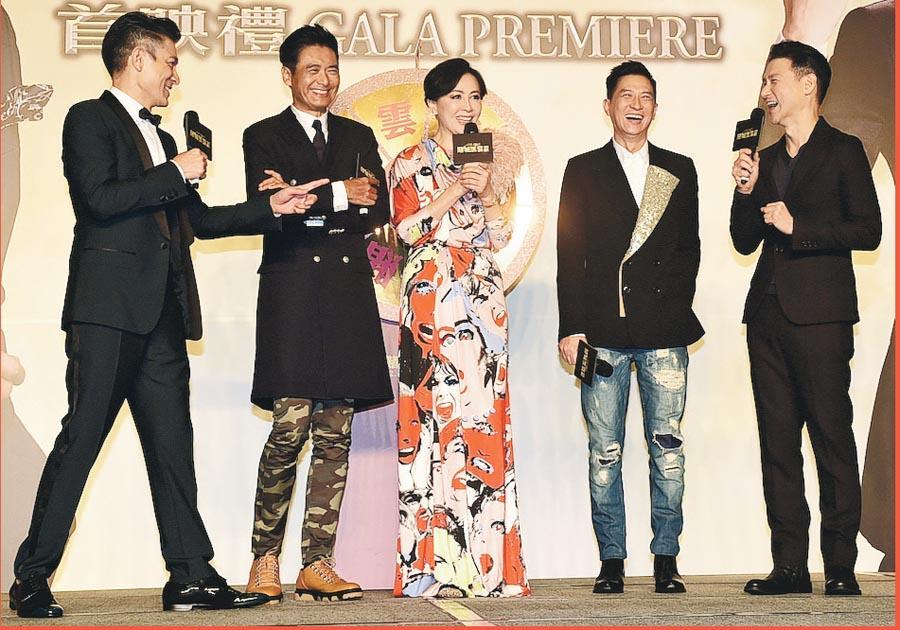 Fat Gor said that he was very happy that before the film was even released, it already had three Best Actor nominees Lau Tak Wa, Cheung Hok Yau and Cheung Ka Fai. Fat Gor jokingly asked Ka Fai to let his "older brother" win because Hok Yau has never won the Hong Kong Film Award Best Actor. Hok Yau said that he actually has won in India with JULY RHAPSODY (NAM YUN SEI SUP) and experienced that joy. Yet at the time the Indian economy was poor, it only notified him of his victory. Ka Fai joked that that award might be curry flavored. Fat Gor said that winning a Best Actor award in India was amazing. Ka Ling also helped with support for Hok Yau. She said that if she and Fat Gor were on the jury, they would give it to Hok Yau for sure because he made movies too infrequently. Wa Jai and Ka Fai were asked to give up the award to Hok Yau, but Wa Jai joked, "I haven't won it yet, how do I give it up?"

Fat Gor also said that he has always had a dream of working on a movie with Stephen Chow Sing Chi, Cheung Ka Fai and Lau Tak Wa. "Yes, four generations all together. (God of Gamblers, Saint of Gamblers, Knight of Gamblers)" He also said that as long as Sing Jai was willing it would work. Ka Fai joked that would be where the difficulty lay. Hok Yau also said, "If not, ALL'S WELL ENDS WELL (GA YAU HEI SI) extended version wouldn't be released now!" Fat Gor joked, "Wow! (Raymond) Wong Pak Ming as a director! He really liked to direct and be the star, when he directed he couldn't be the star! Unless he was like Ka Fai, who could both direct and act. Just let someone else win." Ka Fai said that he did it because it was his interest.

As for box office expectation, Ka Fai hoped that it would make 2 billion. Were they confident about beating Chow Sing Chi's MERMAID (MEI YUN YU)? Ka Fai joked that anyone who would not watch the film would have a year of bad luck; Fat Gor then repeated what he said.

"Everyone fasten your seat belts, to prepare for the box office take off. Our film is very happy, after watching you will be healthier, walk faster, make more money, if you want good luck watch us!" Chow Yun Fat joked, "If Cheung Ka Fai jumps into the sea it will have a chance at 2 billion, there is a sea in the back!"

Speaking of online boycott of the film, Hok Yau asked why. Reporters said that it was because of director Wong Jing's comments. Hok Yau joked, "Brother Jing has nothing to do with this movie." Fat Gor also joked that Wong Jing only slept on the set. "But when he wakes up he knows where the production is at. (Do you want to make a 4th one?) I want to make the 400th one, if I can!"

Lau Ka Ling said to Cheung Ka Fai, with whom she has never worked alone with, "You are a new actor, I don't really know you." The crowd laughed. Then she was jealous of Hok Yau. "I have never seen a lead actor who has more costume changes than the lead actress!" Hok Yau replied, "Because Ka Ling in the film doesn't wear much clothes!" As for her confidence in the new film's box office, she said, "If it reaches 2 billion, I would immediately make a next one!" When campaigning for Hok Yau to win the Best Actor, she said, "Hok Yau for which film are you nominated? Who is the other Best Actor nominee?" Chow Yun Fat joked, "Sister Ka Ling, have you been very busy with your business?"

Brother Jing felt that he could not do anything about the online boycott of the film. Was he worried about the film's Hong Kong box office/ He said, "The Hong Kong box office actually is 1/25 of the Mainland's, would you say I should worry?" He even said that last year even more people said that they would not watch FROM VEGAS TO MACAU 2 (DOH SING FUNG WON II). In the end it came in first at the box office.
Posted by hktopten at 3:12 PM