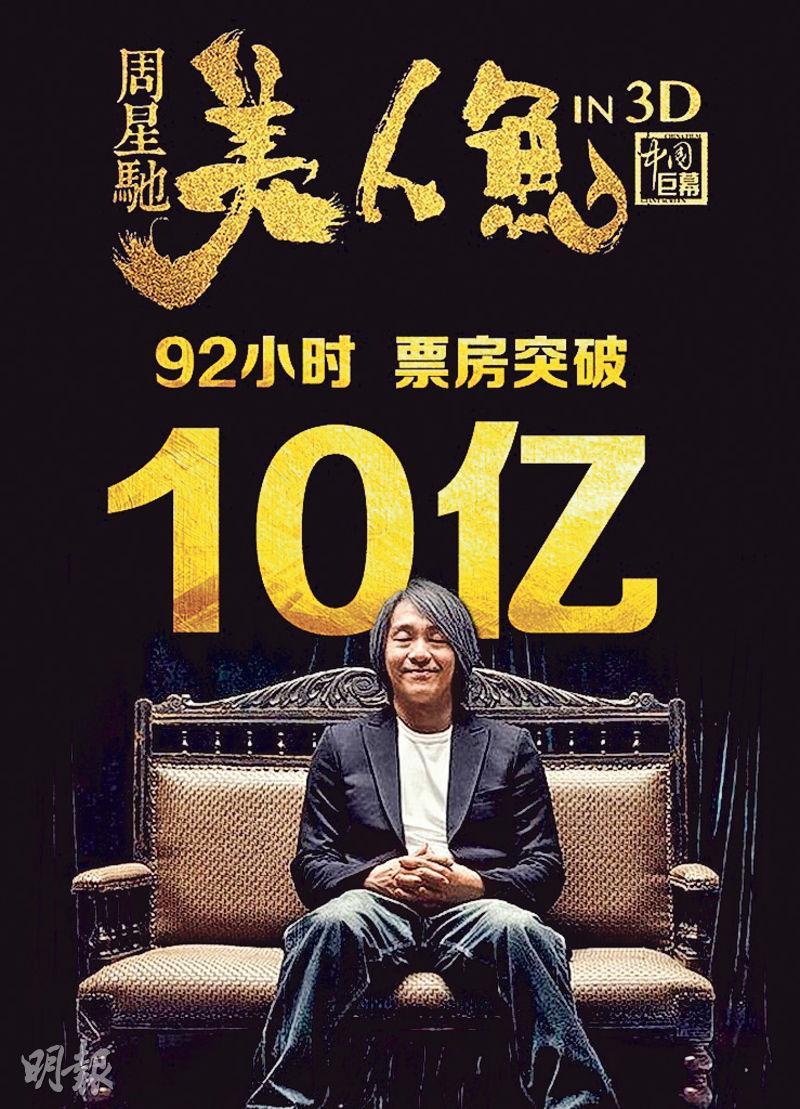 The Motion Picture Industry Association yesterday announced the film box office between the Lunar New Year's Eve and the Lunar 3rd. The total box office was around HK$ 61,526,852, a slight drop of 0.87% form last year. MERMAID (MEI YUN YU) over 4 days topped the list with HK$ 13 million, its opening day was almost HK$ 5 million and broke KUNG FU HUSTLE's 2004 HK$ 4.4 million record to become the Hong Kong film opening day champion. According to Mainland box office sources, the national total box office was almost 1.7 billion RMB between the Lunar New Year's Day and the Lunar 3rd, which was the total box office of last year's 7 day Spring Festival and exceeded the 2005 annual box office; MERMAID, FROM VEGAS TO MACAU 3 and THE MONKEY KING 2 have accumulated over 1.5 billion yuan RMB; MERMAID has already reached 1 billion RMB in 92 hours and become the fastest Chinese films to reach the mark in history. FROM VEGAS TO MACAU had 520 million and THE MONKEY KING 2 had 480 million. However Stephen Chow Sing Chi did not dare to underestimate his opponents as he continued to promote the film in the Mainland. Yesterday he went to Suzhou, then Ningbo, Fuzhou, Dalian, Changchun, Chongqing and Dongguan.

Wong Jing claimed theft from FROM 3's Mainland box office. "Most recently we even learned that someone has been stealing our box office, but we can't find the source. In comparison to secretly stealing the box office, we can still tolerate being openly defamed a little more."

FROM 3 might have box office success but its word of mouth could not be worse. Not only Hong Kong film critics said the film was beyond rotten, some Mainland cinemas even issued an apology online to viewers who have seen the film. "I don't understand why this gang of once superstars wouldn't be so picky with scripts. I also don't understand why Hong Kong film has fallen to this level. This 'film' is completely swindling money unprofessionally."

The apology statement came from the China Film Stellar Theater Chain's Pingliang, Gansu cinema. It responded to the recent flood of criticism against FROM 3. The statement even said, "From now on, we will only schedule one day per day for this film. If you truly want to see it, please take note." It wholeheartedly did not suggest anyone to spend money to watch the film. After this apology was released, debates arose in the Mainland film industry. After a few hours the apology was removed.

This year the Hong Kong Lunar New Year slot had 6 film releases. The Chow Yun Fat starred FROM VEGAS TO MACAU 3 (DOH SING FUNG WON III) from the Lunar 28th to the Lunar 3rd made almost HK$ 15 million over five days. The film company also released a New Spring trailer for the actors to wish the audience a Happy New Year!

In second place was the animated film THE GOOD DINOSAUR with HK$ 10.72 million, in third was MERMAID with HK$ 13.31 million, in fourth was DEADPOOL with HK$ 10.72 million and in fifth was THE MONKEY KING 2 with HK$ 9.07 million. IP MAN 3 over 49 days in release made HK$ 59.31 million, in second place of the top ten cumulative box office and has hope to break 60 million to become the fourth Chinese film to break the mark. On the Lunar 3rd single day box office, Hong Kong films were no match for foreign films. DEADPOOL came in first with HK$ 4.29 million. MERMAID was in second with HK$ 3.41 million.
Posted by hktopten at 2:27 PM