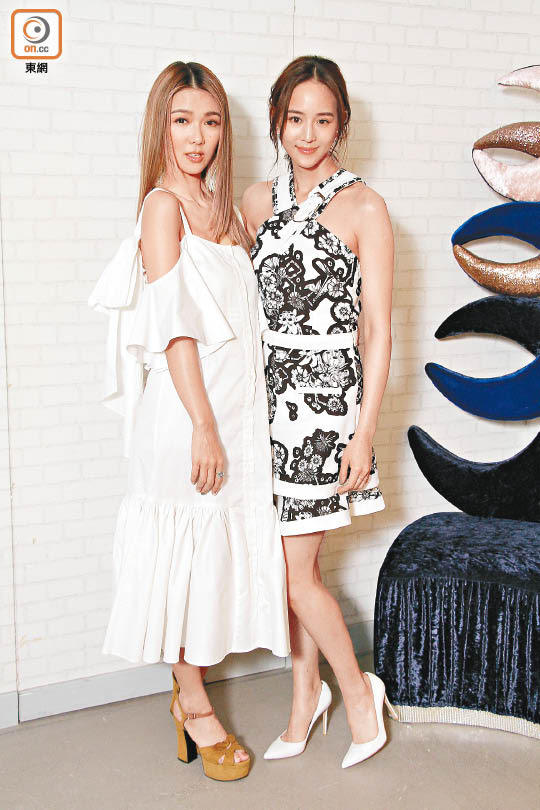 The Barbara Wong Chun Chun directed GIRLS (GWAI MUK) won word of mouth. This year she returned with GIRLS VS. GANGSTERS (GWAI MUK 2 ji DAN TIU YUET NAM HAK BONG). Aside from the original actresses Fiona Sit Hoi Kei and Ivy Chen, Janine Chang joined the line up. The trio had "crazy" fun on and off screens. They kept playing pranks on each other for endless laughter. After being together for awhile they truly became BFFs. When the film wrapped, they shed tears as they parted.

Sit Hoi Kei, Janine Chang and director Wong Chun Chun talked about the production. As the interview began, Fiona already could not help herself but she had a little fun with Janine Chang's less than fluent Cantonese. Fiona kept asked Janine Chang if she was a little dumb. Chang kept nodding. "Right, right."

Fiona said that they kept playing pranks on each other. She said, "Everyday we would come up with ways to play tricks on each other, like hiding her phone. Janine was often almost scared to tears. I would pretend to help her look and secretly shoot her frightened expressions. Once I used a prop snake to scare her. She would also looked stunned, which was very funny." Even Fiona felt for pranks. Wong Chun Chung said, "On the day before Fiona's birthday, the entire team was fooled. Only Ivy, Janine, the cinematographer and I planned to play a plan on Fiona. On the final shot of the wrap, we planned for another take. At this time, Ivy and Janine shoved a cake into Fiona's face. This video will be shown to everyone at the movie's release." Fiona said, "At the time I was very seriously acting, they actually shoved a cake into my eyes. My face was full of cream and I couldn't see anything." Janine cracked up and said, "She couldn't see, she was blind."

Fiona said that this film was one of the happiest production she has been in. "The girls couldn't help but cry when they wrapped up their shoot. Janine and I wrapped before Ivy, so we shot a video to see to her. We ended up in tears. Actually I don't understand why Janine would end up in tears from talking. They lived next to each other in Taiwan. I am at least a sea away. Why was she crying?" Janine said, "I really miss that, we were together for a month, everyday we were very crazy." Fiona said, "We cried as we recorded, like Ivy died. When Ivy watched she cried too, she cried as she watched."

Janine and Fiona had a "duck shop" scene. Wong Chun Chun claimed that one of the gigolos were real and some were not. That morning at 6AM they were shooting before they were awake. They wanted to drink a little so they could get into character quicker. Fiona said, "It was very early and I was awake, so I was more shy. All several dozens only wore underwear. I don't know why at 6AM they already seemed very ready." Janine added, "The guys were very high. When we went in we weren't even awake. We saw that they were already dancing." Fiona said, "I had to whip them, and use hammer, metal and spike. The one I hit was very professional, teaching me how to torture him. We drank so we were more relaxed. Later they complained that we hit them too hard, haha." In another scene they "enlarged" their chests. Fiona joked that this was a dream that the director gave them. Janine said that she would only have a big chest on film. They even took the chance to take photos. Fiona said, "I have BFFs, but the experience in the film is the craziest. At least I haven't been to a duck shop with real BFFs. I haven't been blacked out and naked until the next morning. So this time I did a lot of crazy things that normally I wouldn't. The luckiest part is it s very rare for a group of girls to get along so well. This time has been really happy." Janine revealed the craziest was on her 30th birthday, because it was very close to Ivy's birthday. They went to Boracay to dive and skinny dip.
Posted by hktopten at 8:09 PM