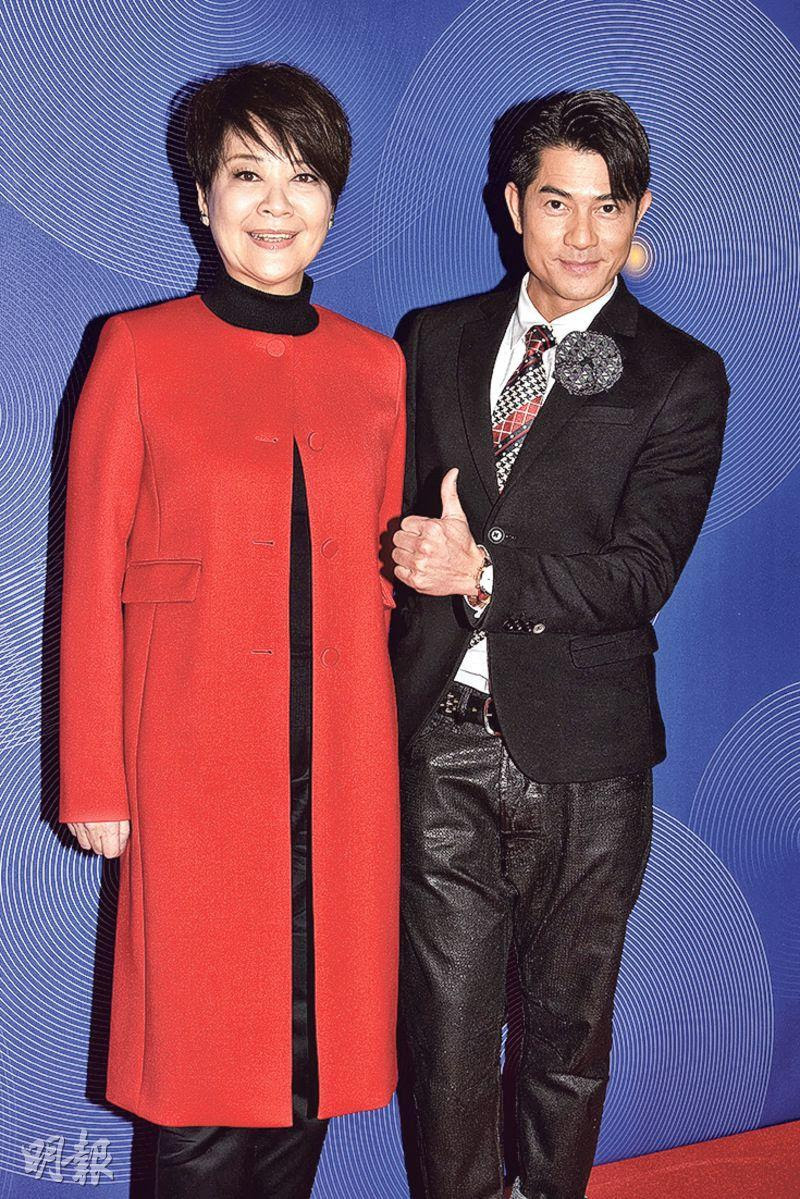 Kwok Fu Sing who was responsible for unveiling the Hong Kong Film Award nominations has been busy with his film and concert preparation. He did not have time to watch all the nominated films. For Best Actor he could only pick his COLD WAR 2 co-star Leung Ka Fai. As for his lack of nomination, Sing Sing said, "I am not disappointed, whether I am nominated or not I am still in the same state of mind because I am a very hard working actor too. In addition last year I just won, I have been there. So I will support everyone just the same. Even without a nomination this year I still will sincerely wish every nominated actor a pretty report card!"

Winning the Hong Kong Film Critic Society Best Actor with TRIVISA earlier, Lam Ka Tung was exciting after learning that he had a Hong Kong Film Award nomination. "Of course I am very happy, I got my first Best Actor nomination at this age. No matter what the result will be, I have already proven that my past effort has not gone to waste. The happiest is aside from me I also congratulate everyone, including Siu Chai (Yam Yin Chai) and Hak Jai (Keung Ho Man); the directors and the screen writers were nominated this time as well. I will even be able to walk the red carpet with Siu Chai. I am really very happy this time!"

Yam Yin Chai was in his U.S. concert tour. "I got this news at 2AM, I wasn't sleepy after that! I am very happy that TRIVISA received so many nominations. Everyone's effort wasn't wasted! I want to congratulate the directors and Ka Tung too!" Siu Chai said that this was the first Hong Kong Film Awards he had since his Best New Actor nomination for FLY ME TO POLARIS (SING YUEN) in 2000. "This time I am actually nominated for Best Actor, it truly is a surprise! Of course I am happy about my nomination, at the same time I am happy for our brother Lam Ka Tung. Our film's lead actors took two spots, go Ka Tung! I am already very pleased with the nomination."

Ng Chun Yu was nominated for Best Actor with SHED SKIN PAPA. He said that this film's special meaning was about changes in Hong Kong, using a few scenes at each age of a grandpa to represent changes in Hong Kong. The feeling was pretty interesting, pretty fun. Chun Yu recalled the difficulty of playing a grandpa. "Everyday I would spend 4 hours in make up, then shoot for 14 hours. Later I had to spend 12 days to lose 20 pounds and get a four pack of abdominal muscles. Finally I turned back into someone in his 20s. I learned for the first time muscle pain would hurt to the point of tears and dizziness. Turning young truly wasn't easy." Yue Man Lok admitted that he received a lot of calls and text messages after the announcement. He said, "I am very happy. The first nomination broke through zero! Many people around me, friends, family, company colleagues were all very happy. The director and Old Dad Tsang Chi Kwai were the first to call me. I am happy because I gave a lot. Everyone would be very happy with such a performance, thank you everyone!"

Tang Wei said, "Thank you Hong Kong Film Award for the surprise. After finding out I held Little Summer and kissed her to celebrate!" She also sad that last year when she was nominated her daughter was still in her belly. Again nominated for Best Actress with SHOW ME YOUR LOVE, Paw Hee Ching also happily said, "Happy! Grateful! It's like a dream! Although the competition is strong, I am fine with getting a good performance!"

Wai Ying Hung was working on a movie n Taiwan. "I truly am very happy to be recognized in my own region. In HAPPINESS I actually wanted to depict Mommy in her entirety. The nomination is like a victory for me already. I hope Mommy knows that I put my heart into playing this character. I am very happy, when I heard I was all over the place emotionally. I was very happy but also thought of my Mommy. So I hope to peacefully spend this day. At the award show I will dress up and sit for a day to enjoy such a grand event."

Zhou Dongyu and Ma Sichun with SOUL MATE both won the Golden Horse Award Best Actress. They were again nominated for the Hong Kong Film Award Best Actress. Zhou Dongyu replied, "Thank you SOUL MATE for the endless surprising that it brings and congratulations to it for such a good performance!" Ma Sichun also happily said, "I am happy for our entire film, thank you Hong Kong Film Award for giving SOUL MATE so much beautiful recognition, I feel lucky and grateful!"

Tsang Kwok Cheung two nights ago was asleep after working all night when many congratulatory messages woke him. SOUL MATE received the most nominations including Best Director for him. He happily said, "I am very appreciative and very grateful! This time I am especially happy to be able to receive so many awards, because SOUL MATE was the achievement of many departments' effort. Thank you to the colleagues and elders who voted for Hong Kong Film Award. I am also very happy that everyone like this film. As for awards, I won't think too much about them."

To Kei Fung already has been nominated for Best Director many times. He said, "Thank you to the boss of TRIVISA and THREE, Lam Kin Ngok, everyone at Media Asia films, and everyone from the two films."

Last year winning Best Supporting Actress with PORT OF CALL (DAP HUET CHUM MUI)'s Kam Yin Ling this year with MAD WORLD again had hope to repeat. Kam Yin Ling excitedly said, "2017 opened up very prettily, actually last year to now I did my best to do my job well. I have always put a lot of importance on nominations and awards. I hope through these motivations I would have the next opportunity to work, but I don't dare to think about 'repeating' or not. When everyone say I am the big favorite I am even more scared. If I won't win I will be very disappointed. With the nomination I of course hope to win." She said that she has been nominated numerous times previously, but each time she waited for the announcement in the audience she would be very nervous and conflicted. She knew that the result was already determined, but she would still be nervous about whether she would win. "After so many years of acting, I still can't control my own emotions. Because people are greedy, when I sit there I really don't know what kind of expression I have to make. If I keep smiling it would seem very fake, but I don't want to be too emotional either." She admitted that she selfishly hoped that her MAD co-stars Yue Man Lok, Tsang Chi Wai and director Wong Chun would win as well.

Man Wing Shan was nominated for Best Supporting Actress with COLD WAR 2. She happily said, "I am very happy to be nominated for Best Supporting Actress again. I will keep working hard and hope to work toward Best Actress next time." SISTERHOOD's Liew Chi Yu was also nominated in the category. When she found out she was promoting the film with her Best New Actor nominated co-star Jennifer Yu Heung Yi. They immediately embraced and cried.

James Ng Yip Kwan with HAPPINESS was nominated for the Best New Actor. After finding out he looked surprised. "Huh, I am very surprise. I never thought that I would come in touch with a film award. I am very happy to be nominated. This year I never thought that I would really develop in the film industry. I am very happy that the director let me play a very rough, bold and dirty garage guy."

Tsang Chi Wai was happy for Yue Man Lok on his Best Actor nomination and said that he would like to win with his son Tsang Kwok Cheung.

Best Film From Mainland And Taiwan