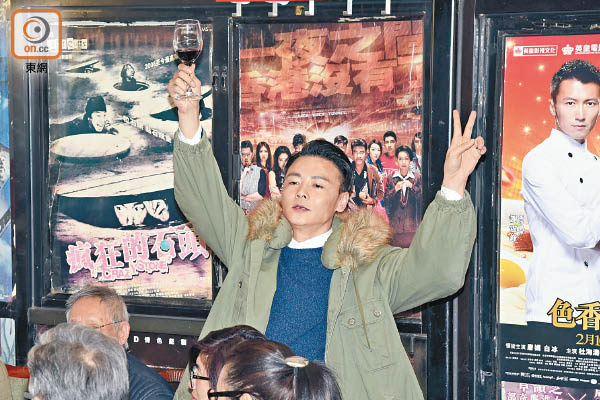 The film DRAGON TATTOO (GAU LUNG BUK BAI) two nights ago held a production wrap banquet. Boss Raymond Wong Pak Ming again gave away big lai see. Leads Max Zhang Jin, Kevin Cheng Ka Wing, Endy Chow Kwok Yin and others posed for photos with the team. Zhang Jin stated that it was the first time that he went to a street stall. "Normally I would go to coffee shops and markets, but it really is the first time I am at such a large Hong Kong style street stall. It's very authentic and very interesting."

At the banquet, Zhang Jin also revealed that this shoot felt particularly long. Usually they shot for 16 hours daily everyday, so he and the team were especially close. Zhang Jin went to every table to toast the team and pose for photos. Playing a cop in a movie for the first time, Chow Kwok Yin also would miss everyone very much. "Just I began to build a relationship with the character Chow Mo the production wrapped. I sincerely thank everyone for these few months, the director team, equipment team, lighting team, hair and costume and others that kept battling on. Chow Mo already misses everyone very much! I think I have post production depression!"

Another lead Cheng Ka Wing also gave special thanks to the team for their care in Macau. When he saw boss Wong Pak Ming's granddaughter, Cheng Ka Wing first observed. Then when he saw that she would let anyone hold her, he could not help but play with her. Rising in popularity recently, Hugo Goh (Ng Toi Yung) attended with his wife Lily Chung Suk Wai. Richard Ng Yiu Han and his son Carl Ng Ka Lung, Sheldon Lo (Law Hau Yung), Deon Cheung Chung Chi, Hinson Chou Tsz Yeung, Liu Chun Hung and Fong Chi Kui all attended as well.
Posted by hktopten at 7:58 PM