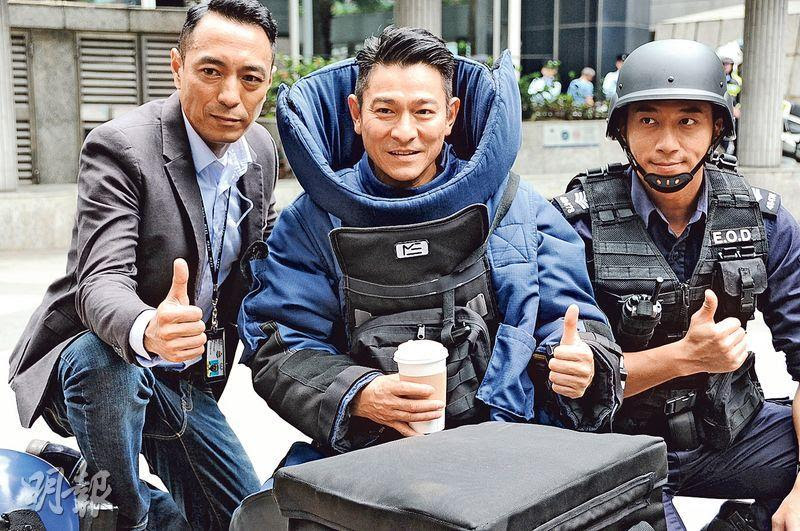 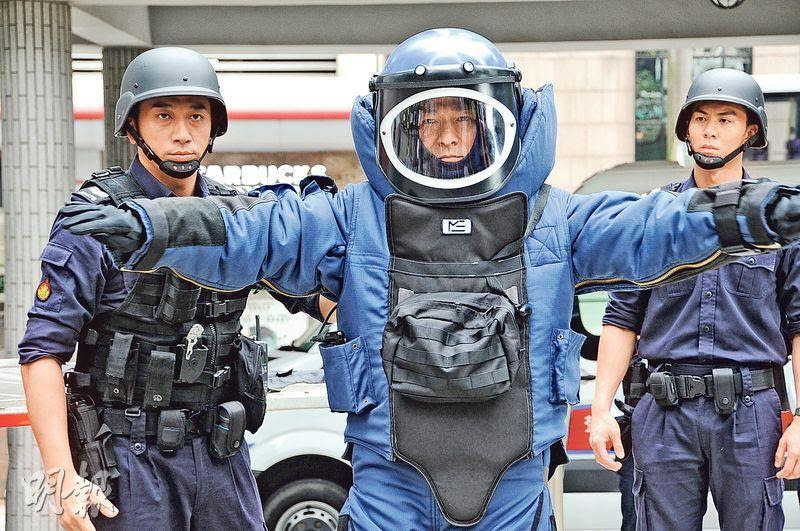 Yesterday Wa Jai was a bomb expert who was handling a home made bomb that resembled the one at the Boston Marathon. Ron as Wa Jai's subordinate even helped him with the anti explosive suit. The set also had many prop fire engines, police vehicles and actors in fire fighter and police officer uniforms.

Wa Jai worked up a sweat and said that he only felt one word in the 70 pound suit, and that was "hot". It felt like when he was in the muscle suit for RUNNING ON KARMA (DAI JET LO). He also said that before the shoot he went to class to learn about bombs. Yesterday on the set real explosive experts were on hand to supervise. Wa Jai revealed that the film would have many explosion scenes. One of the key scene would be in the one to one scale Cross Harbor Tunnel that was built in the Hong Kong International Terminals. Currently basically only the tunnel scenes have not been shot yet. Would the tunnel blow up? Wa Jai declined to reveal. He only said that the director tended to shoot for realism. 1/3 will be done in post production. Why did he ask Ron to perform? Wa Jai said, "I wanted the film to be younger. The director chose him. After I found out of course I agreed."

Did Wa Jai get thinner for the movie? Wa Jai said, "No, because I have to work with Keung Ho Man. He is too thin. I am fit." Ron said, "In comparison then I am fat!" Did Wa Jai feel that Ron had shades of him? He said, "He is more handsome than me, but I have been handsome before." Wa Jai also revealed that in the film he and Song Jia would have relationship scenes.

In the first film after he left TVB Wa Jai was able to work with Wa Jai. Wa Jai said that this was the first film of Ron's beautiful life. Working with Wa Jai for the first time, Ron said that Brother Wa taught him very patiently so he did not care about the salary. Wa Jai joked, "Since he doesn't mind I won't pay, I haven't thought about paying. He is here to learn. I only got to work on it because I paid. Ron in the first scene had to introduce explosives, the lines were very tough to remember. In the entire scene he was solo." Ron said that the biggest pressure from this scene was Wa Jai sitting down and watching him act with his arms crossed.

Ron who has recently been working in the Mainland earlier was caught taking women home with a van. Ron replied, "I am not saying too much, she was a friend, if this keeps up we might not even get to be friends anymore."

Cheung Kai Chung played a tour guide. He said that the most fun part of the role was speaking Putonghua. He was very serious with his acting, and the result became comedic spots. In addition, playing an off duty cop, Choi Hong Yik revealed that in one scene he would be strapped to bombs. Wa Jai in the end would save him.
Posted by hktopten at 2:41 PM