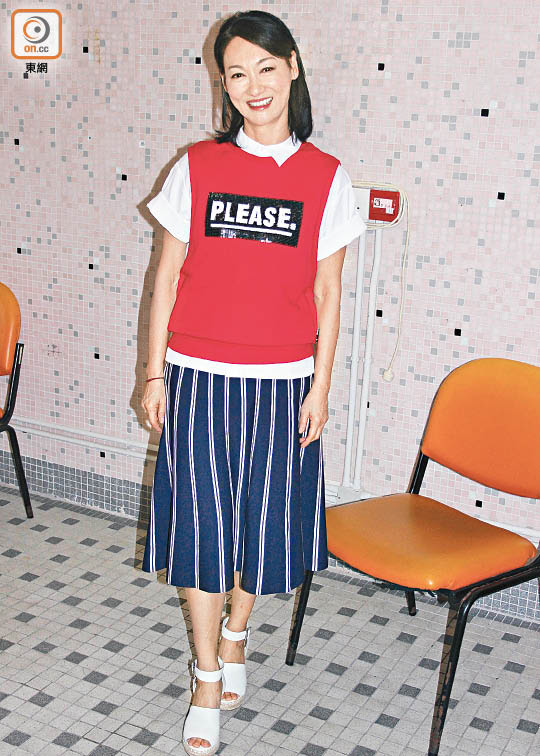 Kara Wai Ying Hung, Carlos Chan Ka Lok and director Law Yiu Fai yesterday visited a Diamond Hill nursing home. Sister Siu Hung revealed that aside from her mother, her 50 year old brother also showed signs of Alzheimer's from an examination two weeks earlier. Thus she and her sister also planned to go next month. However now she is already panicking. She said, "Three years ago I had an MRI, my brain was full!" The director praised how great Sister Siu Hung was in memorizing her lines, she did it all at once. Sister Siu Hung said that studies showed learning new things could strengthen brain power. Now the entire family is studying Buddhist scriptures. As for her mother's condition, she said that even eating was difficult as she had to be fed cereal. Once she choked while drinking and came down with pneumonia. Her mother now did not know how to react.

In the film HAPPINESS (HUNG WON SI NGOR), Chan Ka Lok played a "MK Kid" and dyed his hair blond. However his scalp had a reaction and started peeling. Sister Siu Hung turned her hair silver. When she got home her entire tube turned silver as well. Sister Siu Hung also clarified that she did not constantly yell at newcomers as reported. Even her sister joked that her image was like a bitch. She joked that each time she "yelled" at newcomers she wanted to trigger their potential. Then she would comfort them. Ka Lok said that Sister Siu Hung has been very understanding of her. He shot a crying scenes for several hours and lost confidence. Sister Siu Hung would always encourage him so he could regain his confidence.
Posted by hktopten at 6:42 PM