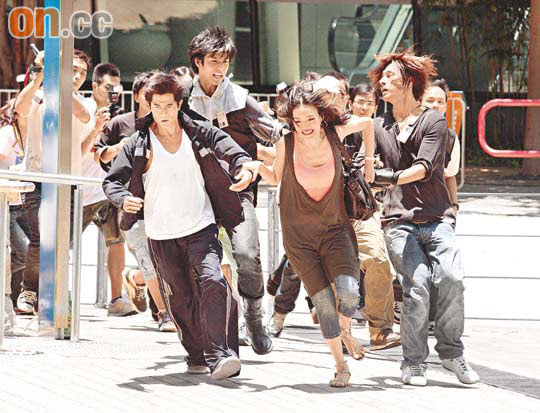 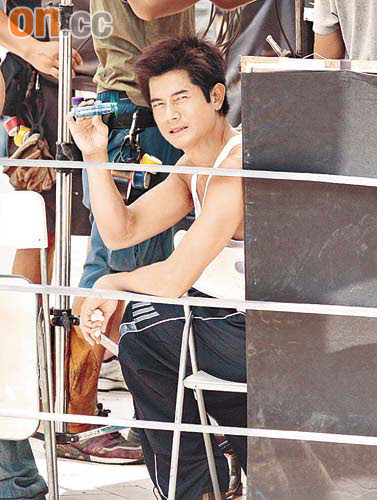 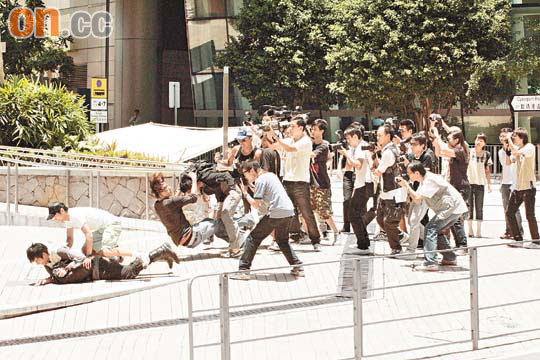 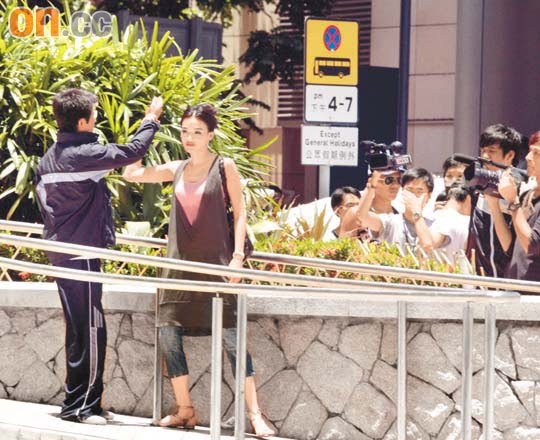 Shu Qi and Aaron Kwok Fu Sing after ten years reunited in a film. Yesterday they started work in Cyberport and ran hand in hand under 33 degrees Celsius. Before they got to their marks they were already sweating bullets, but they had an easier time Square's Brian and James. They fought with stunt people and got bruises all over.

The two best acting award winners yesterday worked on their new film CHUEN SING GAI BEI (CITY WIDE ALERT). Playing a reporter, Shu Qi received help from the superpowered Sing Sing. On the way colleagues found out and chased them. At first he Director only shot them hiding in the bushes. The shoot was easily completed. Then they went to shoot a hand holding "escape", but after two or three takes, the heat seemed to have melted the leads. Director Benny Chan Muk Sing quickly wrapped up the shoot.

Sing Sing who was busy with his Taiwan concert rehearsal revealed that he had to make movies and rehearse so he was much thinner. Sing Sing said that ten years ago he and Shu Qi did not have too many scenes together. This time they are together from the beginning to the end, thus their chemistry and sparks were better than before. As for intimate scene, Sing Sing said, "That's not important, high entertainment value is the most important. In this film I have several looks, the fat look gives me a skin reaction every time. I have to see a doctor and take medicine for that. Luckily those scenes were already done." In September he will work on the Pang Shun directed B+ JING TAM (B+ DETECTIVE).

Brian and James played Shu Qi's assistance. In order to escape they struggled with colleagues. The film company for realism got two stunt professionals to fight with them. After the director yelled cut they were still acting. Brian said, "Since we are fighting we have to get into it. My leg and neck are all bruised! I should've worn pads! (How is working with Shu Qi?) She is easy going, very worthy for us to learn from."
Posted by hktopten at 8:28 PM