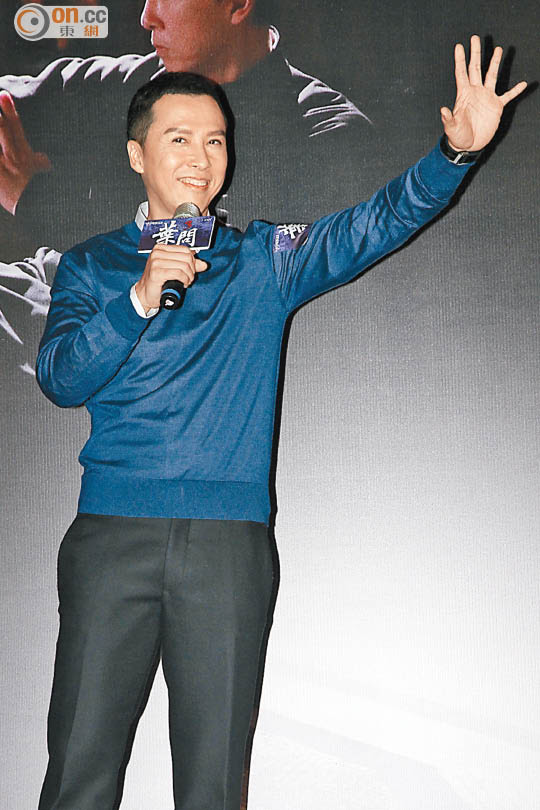 Donnie Yen Chi Tan, Max Zhang Jin, Karena Ng Chin Yu and Patrick Tam Yiu Man yesterday attended the IP MAN 3 charity premiere and five community organizations' members were invited to enjoy the film. Chi Tan and producer Raymond Wong Pak Ming even went to the cinema for an audience appreciation event. A Granny praised Chi Tan as a real man and hug him. Chi Tan asked the audience if they would like to see IP MAN 4? The audience applauded. Wong Pak Ming said that the film will have a fourth installment, but first they have to conduct research and see the market trend. He said, "After IP MAN 2, the community had many more Ip Man. To keep the audience from indigestion, we dragged our feet on IP MAN 3. I hope that the fourth film won't have to wait another five years."

Did Chi Tan already make room for the production? He said that it would depend on various conditions like scripts and the director's direction. Speaking of this film's golden quote, "Those around you are the most important", Chi Tan admitted that in the past he has always been busy with work and neglected his family. Thus he had to change his work format. Will he spend Christmas with his family? He said, "I have a day or two, I will stay in Hong Kong." As for the winter solstice today, he will fly to Taiwan to continue the promotion. He said, "How do we get to celebrate the winter solstice? The boss can, we have to run around the cinemas."

Zhang Jin today will leave Hong Kong with his family for a white Christmas, but he did not prepare any gift. Instead his wife Ada Choi Siu Fun gave him a big gift already. He joked, "It was a combination of Christmas, New Year's Eve, New Year and wedding anniversary gifts, so I can't take it easy. Otherwise I will have trouble at home. (Did she give you a luxury watch?) It's a necessity."

Zhang Jin also revealed that January 12th will be their 8th wedding anniversary and they have been together for 12 years. Reporters congratulated him on passing the seven year itch peacefully. He said, "We already like the number seven, so we weren't afraid of the seven year itch."
Posted by hktopten at 7:18 PM