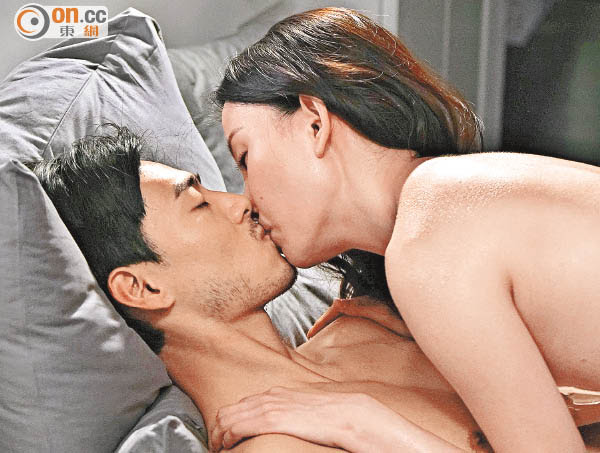 Connie Man Hoi Ling in the Wong Jing produced new film THE GIGOLO 2 (NGAP WONG 2) challenged her own limits and had a series of passionate bed scenes with "duck king" Dominic Ho Ho Man. In one scene Connie even bared her back to perform a fully nude bed scene with Dominic. Despite their efforts producer Wong Jing was not satisfied with the results. He ordered the scene to be reshot. Because the reshoot's result was several times more daring, the film finally went from a category IIB rating to category III.

Connie earlier was surprised when she got the news of the reshoot. Because she rarely made such passionate scenes, after the shoot she breathed a sigh of relief. She never expected that in the end she still had to "do another take", which was too much for her. She said, "Actually I was already very nervous since it was the first time I made this type of scenes. I was told to drink for courage, but because my face would turn red when I drank I couldn't use that method. In the end I could only grab Dominic to chat with so I wouldn't be as scared. That's why when I heard reshoot, I really was stunned at that moment."

Would Connie feel a lot of pressure from the reshoot? She admitted, "Because after the film was done I was completely relaxed, I ate a lot to reward myself. As soon as I found out about the reshoot, I immediately had to think how I could rapidly get back into production shape. This is a huge source of pressure."

As for the film turning from category IIB to III, Connie stated that she would work on and play her role well. She would respect the professional decisions of everyone involved. Her only worry was that before the shoot she told her parents that the film would be IIB, but not that it became III she did not know whether they would mind. She admitted that she would invite her family and friends to watch all of her films before. Now that it has become a category III film some of the younger relatives and friends would not be able to attend. The film's lead actor Dominic stated that he did not mind the film's category III rating. As long as the film will turn out well, he will be pleased as an actor.

Connie in THE GIGOLO 2 not only had daring bed scenes but also a daring poster! In one she was naked and only covered up with her hand. Connie said that when she shot the poster she was scared stiff. "At first I was very stiff with my movement since I rarely posed for this type of photos. Luckily the photographer and Chung Choi Yi, Tong Chi Yui who also posed that day reminded me how to pose more naturally. Gradually I learned to relax."

As for being almost as sexy as goddess Chingmy Yau Suk Ching, Connie stated that she really liked her. "She really is very pretty. After I joined the company I watched her films again. Her acting was very natural and she was very sexy, so I really like her."

The new film has many pretty actresses, among them is new comer Leslie Lam Lei Han. Although it was her first film she already had viewer support. Was Connie worried that the audience would compare them? She said, "I don't mind, everyone love to make comparison. I believe in Brother Jing. Every girl he signs has different jobs. Even with comparison the competition is positive. (What is your impression of Lam Lei Han?) She is great, she is a very hard working girl. She is also in great shape."

Training from skin and bones to a 40 inch chest, Jazz Lam Chi Sin on his first day already worked on a S and M scene with Tony Ho Wa Chiu and Winnie Leung Man Yi. Rarely making this type of films he said that it was more funny than anything else. As for the film turning category III, he said that it was unexpected. He said, "Because when I took it the film was category IIB, now that it has turned into category III I don't know how the company (TVB) will think. I am pretty helpless, but I also understand that since the film can't pass the censors' standards and has to receive a different rating I can't do anything about that. I respect the investors' decisions."

Speaking of working with S and M scene "veteran" Ho Wa Chiu, Chi Sin said that his "acting" did not overwhelm him. Instead he felt that Leung Man Yi was anxious. He said, "She was so nervous that even her thighs were wet. I told her that when we worked together, I would close my eyes so she could relax." He also said that after the shoot he was not satisfied, because at the time he was working on two films at once he could not get into better shape.

Iris Chung Choi Yi in THE GIGOLO 2 also had many sexy scenes. Iris stated that she did not mind that the film has turned into a category III film and praised Man Hoi Ling's top notch performance in her first transition. "She really did very well, she was more than in shape. I really wanted to be thin like her. She was very photogenic." Speaking of the comparison between Man Hoi Ling and Leslie Lam Lei Han, Iris felt that they did not resemble each other. "Although I don't know Leslie well, my impression of her is she is very sexy while Connie is nicer and more mild mannered. In terms of acting, Connie is better. Since she has been in the business longer she has more experience."

Hazel Tong Chi Yui who is responsible for the comedy in the film also praised Connie's successful challenge of herself in the film, as she was able to play a character that was completely different from her. She also enjoyed Leslie's performance very well. "She was a sex symbol who is able to make men fantasize about her. For her first film she performed very well. In comparison to the first film's (Candy) Yuen Ka Man she is on par if not better. She is very talented."
Posted by hktopten at 6:57 PM