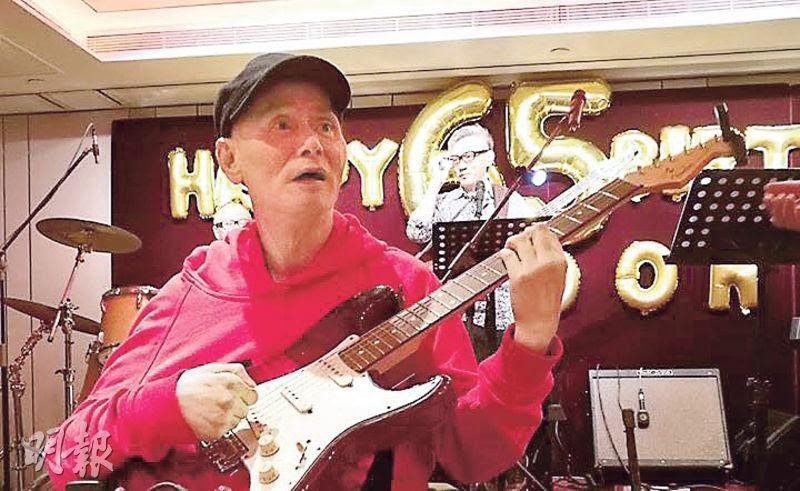 Gordon Liu (Lau Ka Fai)'s 65th birthday was on August 22nd. Amy Fan Yik Man planned a surprise party to celebrate with him. 5 years ago, Lau Ka Fai suffered a stroke that limited his mobility and speech. He also had family troubles, financial lawsuits with his former assistant, all of which worn out him even more. Earlier his fans set up a facebook page and posted photos and videos from Lau Ka Fai's birthday. He looked great and his health condition has greatly improved. Fan Yik Man has been taking care of Lau Ka Fai's life in recent years. She said, "It's a bonus to see his health improvement. He is great, very hard working, stroke patients can be hopeful too."

Among the guests in the photos were Wai Ka Hung, Joe Cheung Tung Cho, Sze Cho Nam and foreign fans. Although Lau Ka Fai was still in a wheel chair, on the video he grabbed the microphone and sang English songs. Fan Yik Man said that three tables were set up for the banquet. Also present were doctors and lawyers who have helped Lau Ka Fai. Because he liked music, a live band was also present. He did not know about the birthday party before hand and thought that he was going to dinner as usual. When he saw his friends he was especially excited. She said, "When he was asked to sing he was shy, later he grabbed the microphone and refused to let it go. He sang several songs; he also grabbed a guitar and played for a few minutes!" Foreign fans shot some videos, his fans from as far as Holland, the U.S. and Canada have contact with him and came to Hong Kong to visit him. Some suggested to make a documentary about Lau Ka Fai, so they shot some videos at the birthday banquet.

Fan Yik Man said that after the birthday party, Lau Ka Fai returned to his nursing home and was so tired that he had to rest for several days. He was in great condition, but there was no guarantee that it would not take a turn for the worse. Earlier she did not dare to take Lau Ka Fai outside because he was too frail. Now they would set appointments to go out and planned to jam with a band as long as he was happy. Early after the stroke, Lau Ka Fai's right hand and foot could not move as his right hand was in a fist. Now he could open his right hand and his walking has improved. The nurses also praised him hard work. She said, "Earlier many people told me that there is no cure for the stroke, the fact is with support and the patient's willing to persevere the condition can be improved." She volunteered to be Lau Ka Fai's guardian. Has it been tough on her? Fan Yik Man said that many friends have helped out. To her, seeing Lau Ka Fai's health improve was a bonus.
Posted by hktopten at 3:30 PM