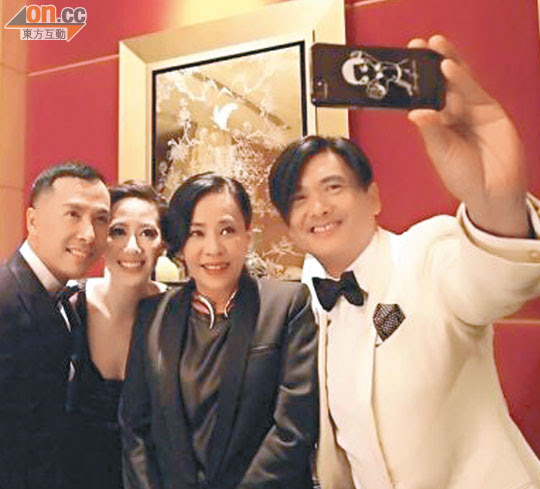 At the event, Fat Gor said, "Yen Chi Tan is a god, Kwok Fu Sing is a bull, and I am a human. Thus the Jade Emperor performance is relaxed and at ease." Yen Chi Tan described the Monkey King character as sexy and spellbinding. Sing Sing said that the Bull Demon King was responsible for the magical fantasy.

Yen Chi Tan was the lead actor and the action director. He revealed that the Monkey King's make up took 5 hours everyday before work. After the shoot he also had to spend 1 hour to remove the make up. When he did not have a scene, he also was responsible for the action direction. Was he willing to accept this challenge again? He admitted that he was afraid. "This type of work has huge impact on my own health and psychological pressure. Thus it's impossible to withstand this 'monkey punishment' again!"

Fat Gor, Sing Sing and Yen Chi Tan also discussed the fight scenes. Their review of Yen Chi Tan was "the best fighting actor"; they thought that his professionalism, his pursuit of action kung fu and art all coordinated with this title. Yen Chi Tan said that he was very pleased with his Monkey King portrayal and said that it was sexy and charming. Just the monkey fur alone already had many under his spell. With Fat Gor admitting to be romantic and Yen Chi Tan sexy, Sing Sing did not join in. He said, "My character was responsible for the film's magical fantasy. My costume and props all required an extraordinary amount of strength."

Also on hand was Erlang Shen Ho Yun Tung. He revealed that this god was a little bad. As for the Zhang Zilin played Nuwa, her refreshing look received praises. She said that she wanted to play the Goddess of Mercy. Chen Chiau-En played Princess Iron Fan. She joked, "Princess Iron Fan was pregnant for 300 years, she was in an advanced maternal age.
Posted by hktopten at 1:54 PM