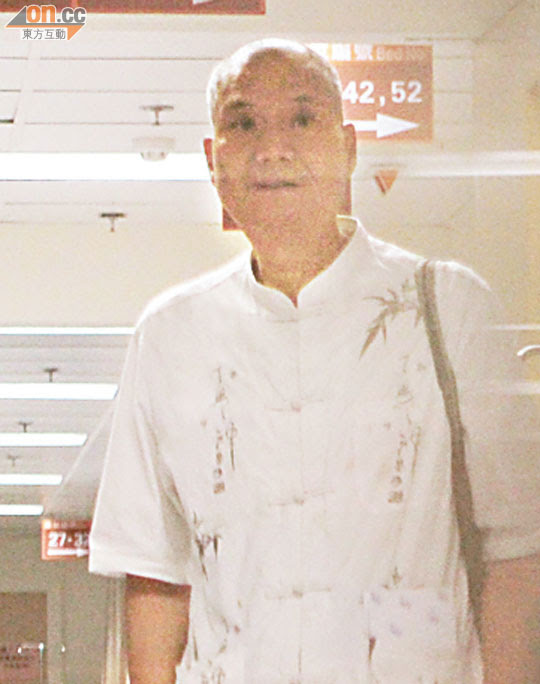 Suffering from diabetes, So Hung Suen yesterday passed away at the Queen Elizabeth Hospital at the age of 62. Earlier her right foot began to rot and she had numerous operations. She had to remove the rotten flesh on one of her toes and the bottom of her foot. Reportedly aside from diabetes she also had a light stroke and a tumor in her belly.

So Hung Suen's son last night around 8PM announced the news of his mother's passing to the media. "Mommy around 4PM left this world. She went very peacefully. Mommy's final journey will be handled with a Buddhist ceremony." He revealed that his mother passed away from complications from a stroke. "The doctor will discuss the details. I want to say that Mommy went very peacefully. Most of the most important family members were around her, so Mommy had no regret." So Hung Suen's husband Hui Sing Biu arrived around 8:30PM. He looked calm and often covered his mouth with his hand.

Law Lan and Yu Mo Lin who have always stayed in touch with So Hung Suen yesterday confirmed the news of So Hung Suen's passing. Yu Mo Lin said, "Earlier she suffered a stroke and her belly had a tumor. However the worst part was she was anemic, her body was very weak. The doctor didn't dare to operate on her." Law Lan was rather sadden by the passing of her good friend. She admitted that she heard the news from Maggie Chan Mei Kei. "Sunday I went to her home. She was speaking and called me Sister Law Lan."

Playing mother and son with So Hung Suen in the classic series POLICE CADET (SUN JAT SI HING), Tony Leung Chiu Wai was very sadden to learn about her death. "Sister Suen and I are both Buddhists, I hope Sister Suen will soon reach Sukhavati. I will always remember the destiny of working with her." His wife Carina Lau Ka Ling said, "Sister Suen was a very gentle actress without any grievance with the world. She was serious about work, kind and caring to her colleagues. I wish for her to reach Sukhavati soon. She will forever live in my heart." Johnnie To Kei Fung, the director of So Hung Suen's final work LIFE WITHOUT PRINCIPLE (DUET MING GUM), said that he just dined with her several months ago. He admitted that the news came too suddenly. "Ultimately life in the end requires a period. Aside from her outstanding acting, her merciful and charitable heart has put a perfect period to her life."

So Hung Suen in 1972 enrolled in TVB's first artist training class, with classmates like Ching Ho Wai, Hui Siu Hung and Kam Kwok Leung. Because Sister So looked older than her actual age, she often played mother or elderly characters. Sister So's acting was excellent as she participated in around 50 television series. She had a lot of representative work, her best known character was Leung Chiu Wai's mother in POLICE CADET. In 1996 she left TVB to assist her husband in their Buddhist vegetarian restaurant business. However she returned to ATV in 1999 for a series and would occasionally participate in film as well. Last year with LIFE WITHOUT PRINCIPLE she won the Hong Kong Film Award Best Supporting Actress. However at the time she was being treated for diabetes at the hospital, thus she was unable to personally accept the award.

Winning the Hong Kong Film Award Best Supporting Actor in 2012 with So Hung Suen, Lo Hoi Pang said, "Half a year ago I went to To Kei Fung's party with Sister Suen. I learned that her health was poor and she was much thinner. (Were you thinking about asking her to watch your show?) I didn't want to disturb her! Diabetes really is troublesome."

Her first training class classmate Kam Kwok Leung said, "We had no contact in recent years. Earlier when I was a Hong Kong Film Award juror. When she won with LIFE WITHOUT PRINCIPLE, people misunderstood that it was because we were classmates. (Did you feel heartbroken and sudden when you heard the news?) No, at a certain age people expect it, instead I would see if there is anything that I want to. I would try to do it instead of safeguarding my life. This should be the attitude to have in life. She believed in the Buddha, I believe she would think that way."

Fellow training class classmate Hui Siu Hung said, "I heard the news. I rarely contact old classmates. Recently I haven't seen her. I knew that she had diabetes and a tumor, which were quite troublesome."