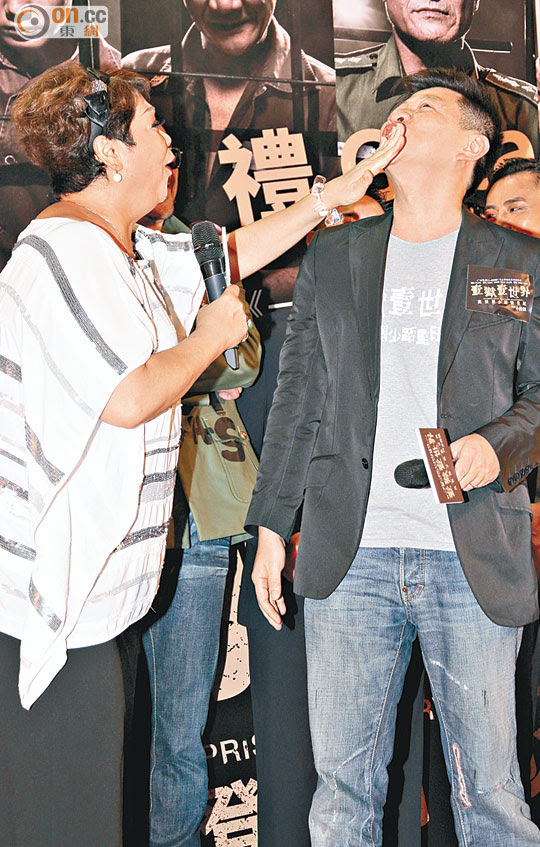 Anita revealed that in the film she touched herself to seduce Wong Chung Hiu. Would she like to have a love scene with him in the sequel? Anita who has never been in a bed scene said that she had no bottom line with her roles. "Everyone thinks that how can a sexy girl never make a bed scene. (What if the sequel has a bed scene?) I will have to look at the script, as an actor I have no bottom line."

This time the film company promoted the film on the streets of Causeway Bay and at the cinema. Maria Cordero led the cast and many extras to perform LIGHT OF FRIENDSHIP on the streets. Fat Ma originally planned to kiss Stephen Shiu Jr. on the cheek, but she "accidentally kissed" him on the mouth. She joked that she had to tell her husband first. Stephen Shiu Jr. even hoped that this time the box office would be able to break the earlier 3D SEX AND ZEN: EXTREME ECSTASY (3D YUK PO TUEN ji GIK LOK BO GAM)'s HK$ 40 million box office performance.

Leads Wong Chung Hiu and Cheung Kin Sing were asked if they were confident about breaking the HK$ 40 million box office record? Cheung Kin Sing who gained weight for the film stated that he would not gaining weight again to celebrate. Wong Chung Hiu was asked that if the film successfully breaks the record would he streak again? He said that the audience probably would not want to see that again. Would he consider skinny dipping? Wong Chung Hiu said that he did not care. Kin Sing also joked that he would keep his brother company and get naked with him.

Artist Chrissie Chau Sau Na two nights ago appeared at the IMPRISONED: SURVIVAL GUIDE FOR RICH AND PRODIGAL. Just celebrated her birthday, she revealed that she was waiting for her friends to introduce a new boyfriend. "I received a lot of well wishes. (Did you wish to find a new boyfriend?) I wish that for every girl. (Did you want to date?) I can't hurry that, I would go out and eat with friends for them to make introductions (to guys)." As for what she was looking for, Sister Na said that not too thin. "Taller than me, I like the sense of security. (Are you preferred big guys?) Not too thin, because I got fat (from birthday dinner)!"
Posted by hktopten at 6:11 PM