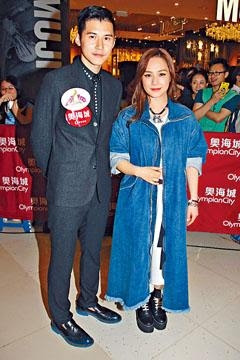 Gillian Chung Yun Tung said that she guest starred for the film for two days. Lately she has been busy with her Shanghai concert on the 24th. At the end of next month she will perform another show in Macau and more stops are being planned for the tour next year. Ah Gil said that recently she took a Mainland series role and will shoot in Xinjiang and Hengdian. She said that she has never been to Xinjiang. Since she did not like the cold she would get a hot water bottle. As for Steven Cheung Chi Hung admitting to "cheating" with a Taiwan girl, Ah Gil said that she had no idea what happened and was not close to him. She instead asked the reporters for details.

Carlos Chan Ka Lok's film with Kara Wai Ying Hung, HAPPINESS (HUNG WON SI NGOR) made HK$ 2 million at the box office but won all the word of mouth. THus he still would take everyone to dinner, but definitely would not celebrate by going skinny dipping. Since the film was a family film that would seem inappropriate. He was pleased with his steel beam shape and could consider it next time. Ka Lok will head to Thailand for a horror film. He said that it would be his fourth horror film this year.
Posted by hktopten at 4:58 PM