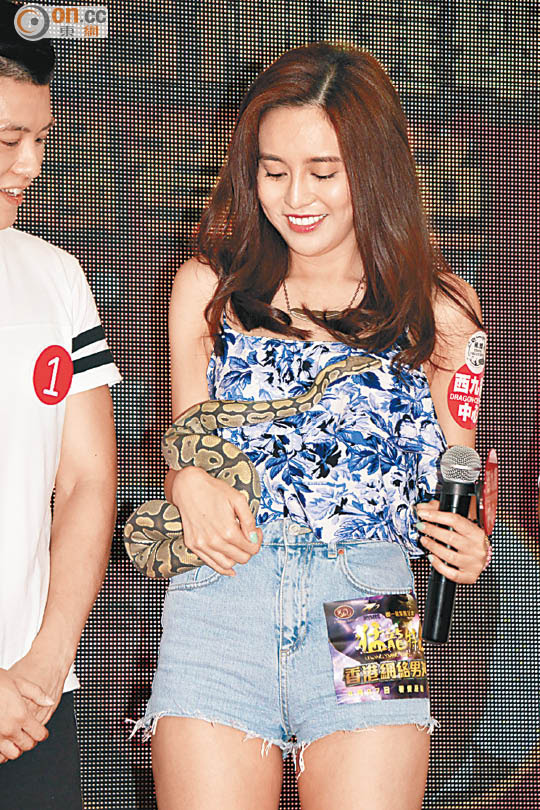 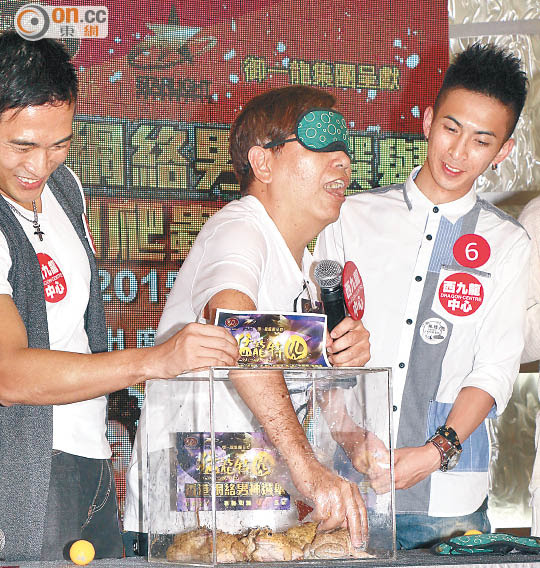 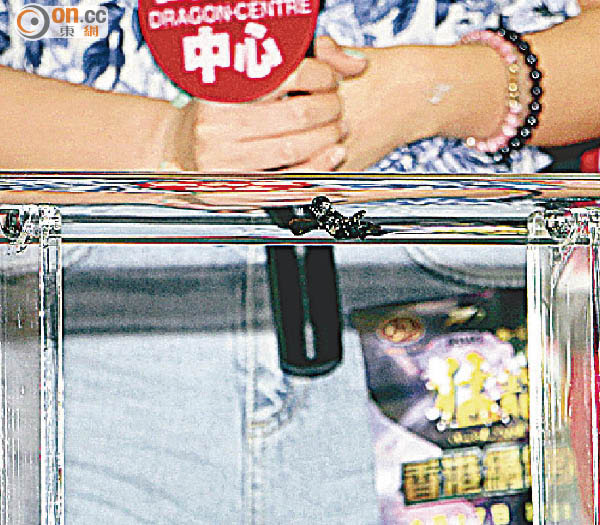 Yu Kiu first waited for the 9 Hong Kong Internet God candidates to pose for photos with animals. Then Yu Kiu carried an over 4 foot long boa and posed for photos. She even put it around her neck and let it slither. Although this type of boa was not poisonous and was mild mannered, not every female star would have the courage to "dance with snakes"!

Then Yu Kiu, Wu Yiu Fai and Tin Kai Man took turn to be blindfolded and stick their hand into a box with bugs and toads to remove a ping pong ball. Wu Yiu Fai screamed, "Hey! This really doesn't work. The blindfold is the most terrifying, I am really scared!" Finally he needed someone to do it for him. Yu Kiu instead messed around as she kept abandoning the ball for the bugs, making the host Tang Yi Ling scream. When Yu Kiu removed her blindfold and learned it was a meal worm, she calmly said, "It's very ugly!"

Yu Kiu was complimented for being more courageous than the men. She said, "I am OK with snake, bugs, rats and ants. My first pet was a gecko, at the time I caught mosquitoes to fed it. However I am still afraid of something. I am very afraid of birds! (Were you attacked?) No, I don't know why. I am very afraid. I can't see anything with a sharp beak. I think they are ugly. So I decided after marriage I definitely won't cook chicken, make chicken soup, or perhaps I would buy frozen ones. I don't want to see the sharp beak. (Are you afraid of the feather duster?) I have no problem with a cane, the feather ones I am very scared! A bird flew into my home on three occasions and it was terrifying for me. Actually I am pretty good with catching 'Siu Keung' (cockroaches). (Is Adason Lo afraid of Siu Keung?) I am less afraid of it! (Does he rely on you to catch Siu Keung for him?) If any friend is scared I can protect them. At home I only have a cat. It's not convenient to have a snake as well."

Wu Yiu Fai said about Yu Kiu's exceptional preference, "At first when I told her about this event and asked her if she could, she said that she wasn't afraid of anything creepy crawly. She was afraid of birds. I asked her, 'Are you messing around?' I am really afraid of bugs and cold blooded animal. 'Siu Keung' instead I am not very afraid of because I have poisoned the 'Siu Keung' before. 3 hours later the white tiles were all black. There were so many 'Siu Keung' I had to get a dustbin to sweep them! 'Siu Keung' isn't very scary, the entire scene was just gross!"

Ronald Cheng Chung Kei originally was to appear at the new film promotion yesterday but in the end was absent. Instead he sent a video. His manager Tin Kai Man yesterday explained, "Earlier he was working on a film. Last night he just wrapped up (Vincent) Kok Tak Siu's TIN SUN BUT DUI (NATURAL BORN WRONG). This round of jobs were very closely scheduled, with the heat and the cold he had tonsillitis. He has already recovered, but because tonight he will have to work again he has to rest. (Yet he was very lively as Edmond Leung Hon Man's concert guest?) He was still sick that day. When he got to the rehearsal his voice wasn't great, but since he made the promise he didn't want to miss it."

Reportedly Ronald not only has been working on TIN and CONCERTO OF THE BULLY (DAI LOK SI WAI OI PUI LOK) he also had to work on post production for THE TREASURE (SUN BEI BO JONG) for inspection. Then he will have a big pile of films and a concert tour of Hong Kong and Taiwan!
Posted by hktopten at 7:10 PM