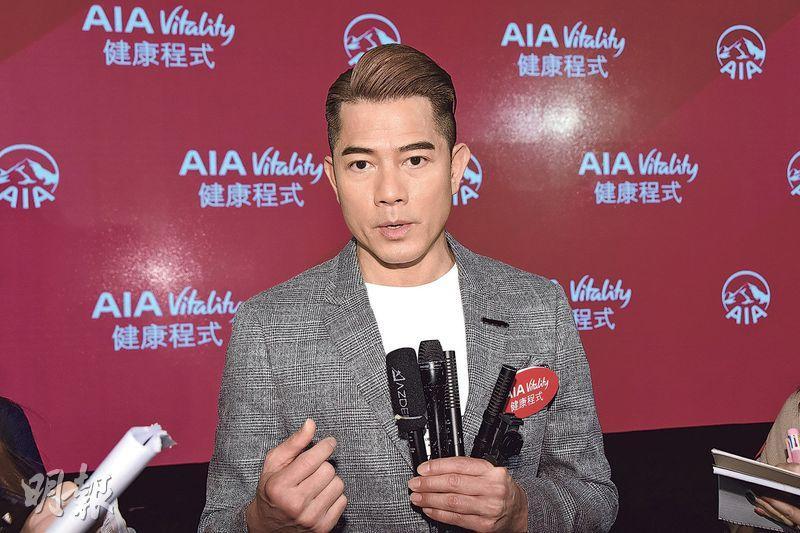 Aaron Kwok Fu Sing yesterday attended an insurance company event. The Sing Sing starred social hot topic film I'M LIVIN' IT (MAK LO YUN) was selected for the Tokyo International Film Festival's "Asian Future" segment. Sing Sing revealed that he became very interested after reading the synopsis one night. Because this was a movie about the Hong Kong poverty line and housing problem, no matter what offer the film would make he would agree to perform. He learned that the film received high praises at the film festival and felt very happy.

The Sing Sing starred film I'M LIVIN' IT (MAK LO YUN) was selected for the Tokyo International Film Festival's "Asian Future" segment, after receiving high praises the film will hold its global premiere. Sing Sing was very happy after he got the news. He remembered before he took this role he was promoting another film at the Cannes Film Festival. The producer deliberated brought the script to show him. That night after reading the synopsis he immediately felt interested, because this was a movie about the Hong Kong poverty line and housing problem. As a Hong Kong actor he hoped to be able to do his part to make the world experience a Hong Kong story with Hong Kong film. Thus he told his company that no matter whatever offer the film would make he would agree to perform. He pointed out that after PORT OF CALL (DAP HUET CHUM MUI) he ran into another character with a lot of potential and gave him a sense of satisfaction over his performance. Sing Sing pointed out that if he would be able to make time he would attend the Tokyo International Film Festival.

The DaDa Chan Jing, Kevin Chu Kam Yin, Candice Yu On On and Louis Cheung Kai Chung starred film THE SECRET DIARY OF A MOM TO BE (BABY FOOK SAU GEI) was invited to the 32nd Tokyo International Film Festival's "Asian Future" segment. Director Luk Yee Sum would attend the event with the on screen couple Kevin and DaDa.

DaDa was very happy to learn about the film festival selection and praised her first time co-star Kevin as a "treasure boy". He said, "Kevin has many positive points that is worth everyone to discover, he looks very sunny and very positive. He also has his own charm, very serious at work and is a good actor with a lot of passion!"

Speaking of preparing for the production, DaDa admitted that she did a lot for this character. She first cut her hair short for the first time for a film. She even made the "sacrifice" and gained almost 20 pounds for the role. She said, "I spent almost two months on molding this character. The most stressful was that I have never been pregnant before. Although I really like children, the character isn't the usual pregnant woman. She is a strong career woman who doesn't like children, because of her experience, her journey and even biological elements from the pregnancy......so I spent more time on research. I also studied many pregnancy books and was very grateful for many great Mamas around me for s sharing a lot of experience and knowledge. I hope the audience can sense my effort and sincerity from the film."

Kevin was surprised and grateful for his first lead role to be selected for the Tokyo International Film Festival. He also spoke about the shoot. "The funniest was when DaDa, Sister On On and Ah Chung were doing a dinner scene. It was the first time a man squeezed my chest hard, but it didn't feel all that bad! Haha! In addition DaDa and I got along very quickly; we worked on intimate scenes on the first few days already, but no one didn't seem to have any problem. It was my first time with such a strong intimate scene so the impression was deep."
Posted by hktopten at 2:23 PM