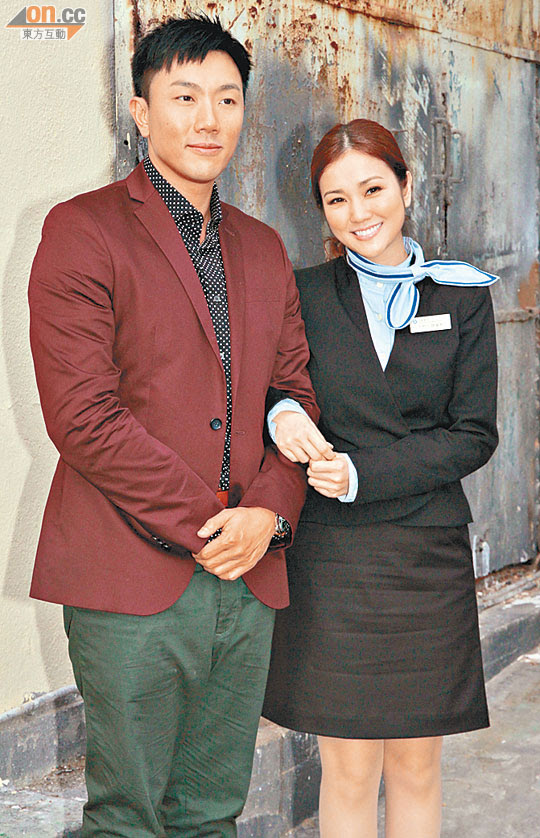 Wilfred Lau Ho Lung, Kay Tse On Kay and producer Teddy Robin Kwan yesterday worked together on the film MOOT YUT PAI DUI (DOOMSDAY PARTY). Si HIng in the film proposed to the bank client manager Kay at the bank with flowers and a ring. Was it a rehearsal for his proposal to girlfriend Joey Yung Cho Yi? He said, "It doesn't need to be rehearsed, but working with Kay has been very pleasant. After working together on a song we are working together on a movie. We are very familiar so it won't be awkward. (Any intimate scene?) No, instead she and (Paul) Wong Koon Chung have a bed scene." Principal Alan Tam Wing Lun online made fun of Joey. He said, "Principal is always more than humorous, he is constantly joking. (Are you in a better mood after dating?) I am much happier when I am working ona movie."

Kay looked very smart in a bank employee uniform. Did her husband Louis Cheung Kai Chung like uniforms? She awkwardly laughed and said, "I don't know, but I brought the uniform home to clean. When it's hanging at home, he would take a few more glimpses. (Did your son think you changed jobs?) No, actually he has never been uncertain about our professions. He felt that all the fathers and mothers in the entire world would appear on television, it's just a matter of sooner or later." She said that her son loved to watch INBOUND TROUBLES (LO BIU NEI HO YEH!) to support Cheung Kai Chung's performance, but he knew that the story was fictional. He was not curious about him playing a couple with Ivana Wong Yuen Chi.
Posted by hktopten at 12:39 PM