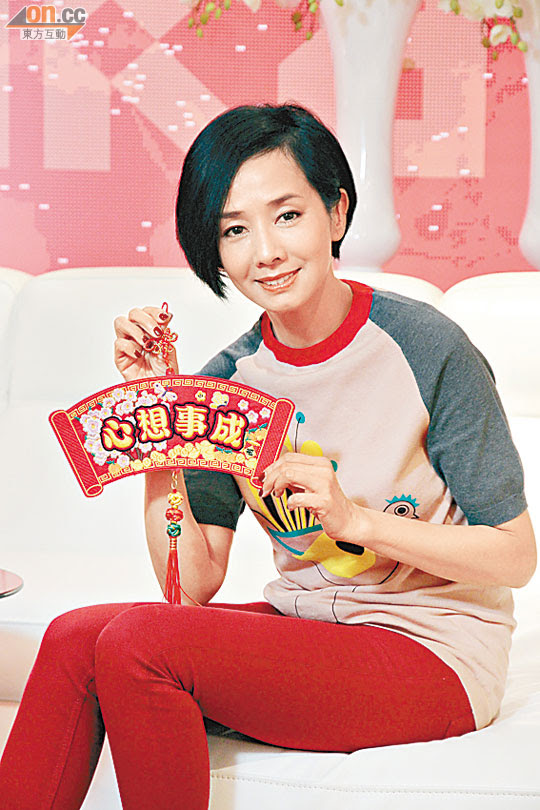 Teresa Mo Shun Kwan and Sandra Ng Kwan Yu both are Raymond Wong Pak Ming's Lunar New Year centers, but the last time they worked together was in the 1994 film CRAZY WOMEN (SOR DAI JEH WAN JUEN FUNG YUN YUEN). Sister Mo admitted to "breaking ice" with Kwan Yu. "When we were younger film productions were busy and rushed, we didn't have a lot of opportunities to chat. This time we ate together almost everyday. We both have become mothers and have endless topics. Kwan Yu even brought DVDs to exercise with all the actresses and assistants. I have never done that in all my years in movies."

Speaking of parenthood, Ronald Cheng Chung Kei who has become a father also have in depth experience. Sister Mo joked that she did not need to share any tip to her "son". "Chung Kei and I played mother and son in MR. CINEMA (LO GONG JING JUEN). Little Daughter in law is very attentive with her daughter. I am always making fun of Son, now he is already satisfied with holding two ladies. With life and acting he has already become more and mature and stable!"

Sister Mo's daughters are growing up. While family comes first she longed to challenge for the Best Actress award, but she would not deliberately increase production. Sister Mo said, "My younger daughter may be going to an university overseas, so I cherish our days together even more. A few more movies won't guarantee an award. Hitting it in one shot is the most important. I have to wait for directors to give me something to work with."

Speaking of the 10th anniversary of her good friend Leslie Cheung Kwok Wing's passing, Sister Mo would not have any special memorial. Yet whenever she remembered playing mahjong with Gor Gor she still would smile from the heart. "During the Lunar New Year we played for seven days and seven nights. Gor Gor's mind turned very quickly, we played slower. He would rush us with a rule in his hand."
Posted by hktopten at 3:20 PM