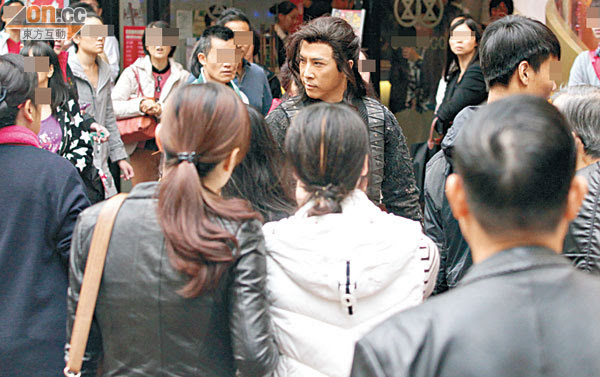 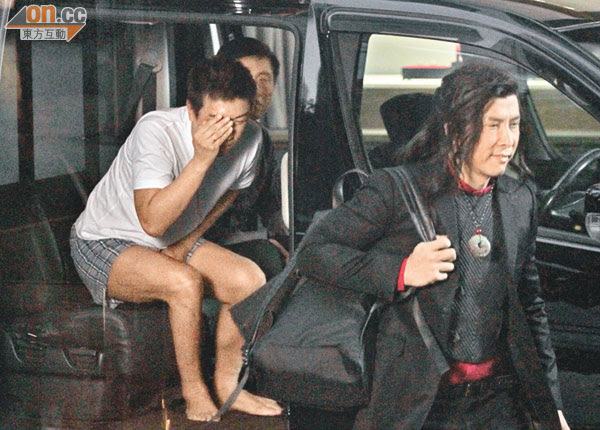 Earlier announced its production start in Hong Kong, THE ICEMAN COMETH 3D (3D BING FUNG HUP) halted production for more than half a month because it did not receive Mainland approval and almost was truly frozen. Recently Mainland Zhongmeng Century Media purchased the Stephen Shiu and Stephen Shiu Jr.'s shares and work resumed. Yesterday Yen Chi Tan in a costume hero look appeared in the busy city. In addition Benny Chan Ho Man who guest starred for a day brought his daughter Chan Nga Yu, who became the focus and stole the spotlight from her father and Big Hero Yen.

The HK$200 million 3D action film THE ICEMAN COMETH earlier began production in Hong Kong. Director and actor Yen Chi Tan and another director Law Wing Cheung, along with Mainland actors Wang Baoqiang, Eva Huang Shengyi attended the production start ceremony. Yet soon after the production was rumored to have been halted due to the lack of Mainland approval. After an investor tug of war finally Stephen Shiu and his son gave up their investment, Mainland Zhongmeng Century Media purchased all of the shares and work resumed.

Yesterday on the busy streets of Causeway Bay, the director's clapperboard the title was changed to GUM YI KEI HUP (SILK CLOTHING HERO). Director and lead Yen Chi Tan set aside Ip Man to appear in a costume. He indeed was the strongest in the universe as the crew prepared an official plastic chair for him so he was able to sit in front of the camera to study the angles and discuss the production. He was very friendly and kept waving to the crowd.

Yesterday some might not have seen Yen Chi Tan in action because he and Benny Chan Ho Man worked on time travel scenes. He as the costume person fan into the Chan Ho Man played modern person; although he only guest starred for a day, Chan Ho Man returned to Hong Kong. When the reporter asked them for a photo together, Chan Ho Man respectfully asked reporters to ask Yen Chi Tan first. Chan Ho Man even moved Yen Chi Tan's official chair for the photo.

Chan Ho Man this time brought his wife and daughter to work. His daughter just turned 1 last December. When Chan Ho Man's wife carried their daughter to watch the shoot, the baby attracted a lot of attention as pedestrians played with her. The baby under her mother's instruction even blew kisses to pedestrians; her mother dressed her like a bunny and she obviously stole the spotlight from Yen Chi Tan and her father Chan Ho Man.
Posted by hktopten at 1:21 PM